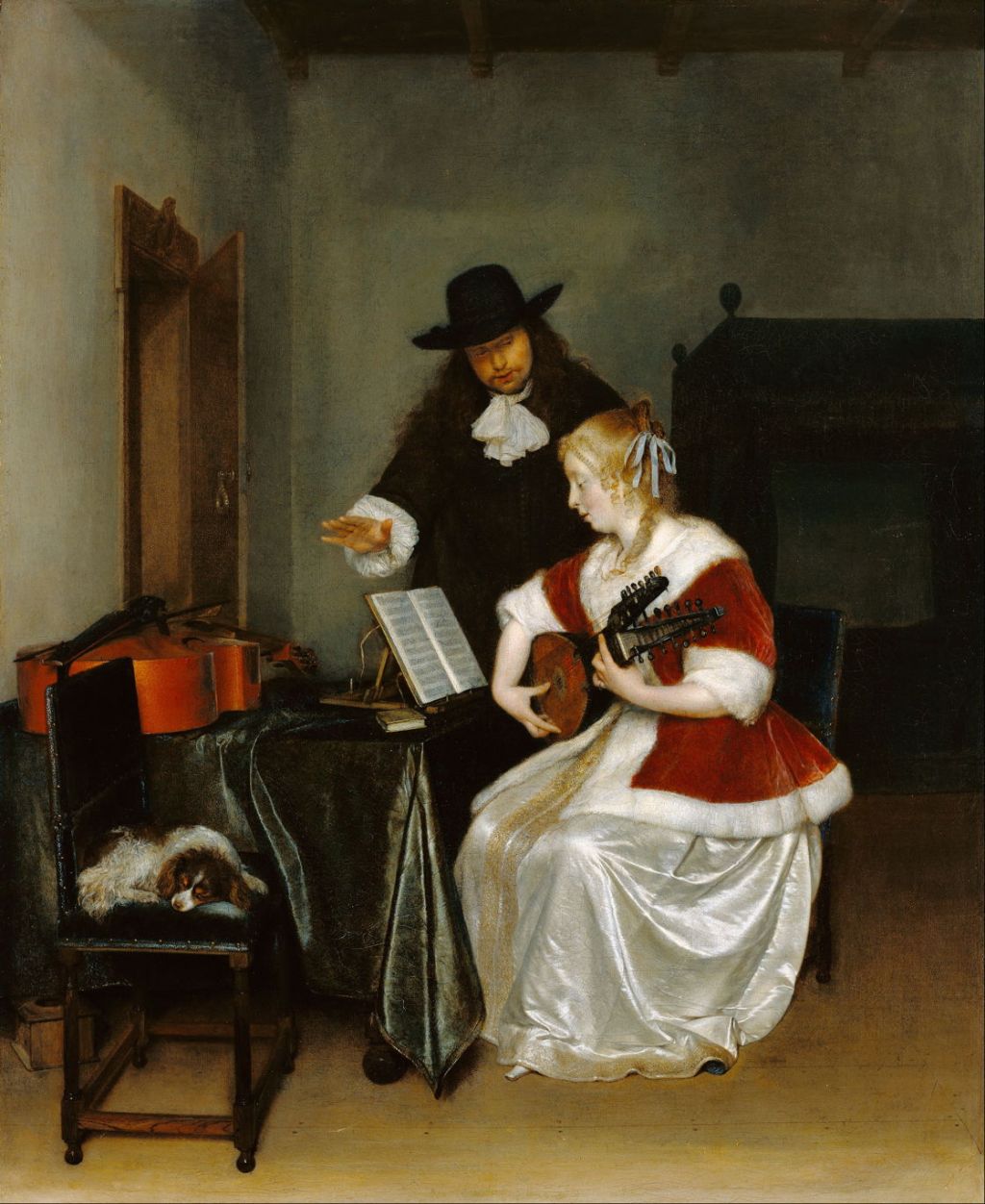 In my first article celebrating the four hundredth anniversary of the birth of Gerard ter Borch (1617–1681), I looked at his development of indoor genre works from full-length portraiture. In 1655, he had become sufficiently established in Deventer that he became a citizen, and was later appointed a city councillor.

Ter Borch’s half-sister Gesina also appears to have been his model for Woman Writing a Letter (c 1655), which makes obvious the connection between ter Borch and Vermeer. Move this woman to a desk lit through windows at the left, light her surroundings, and you have a painting very similar to Vermeer’s.

This painting, though, shows a heavy decorated table cover pushed back to make room for the quill, inkpot, and letter. Behind the woman is her bed, surrounded by heavy drapery, and at the lower right is the brilliant red flash of the seat.

The Spinner is dated to about 1655, but may well be the pendant to Mother Combing the Hair of Her Child (c 1652-53), and uses the same model. Here she looks intently at her work, a small dog on her lap. Once again, ter Borch renders the fabrics of her clothes brilliantly.

I have concentrated here on ter Borch’s domestic genre works, but about half of his eighty or so surviving paintings are portraits. This Portrait of a Family from 1656 stands somewhere between, as a bridge. The couple and their three children are shown quite informally in a living room with the ever-present bed. At the left edge is something of an innovation: a dressing table, with brushes for the mother’s and daughters’ hair.

Long before its value in preventing scurvy was realised (in 1747), or it was carbonated even later, still cloudy lemonade had become a popular soft drink. The extensive trade links of the Netherlands, particularly during the Golden Age, made the drink available to the middle classes, as celebrated in ter Borch’s The Glass of Lemonade (1655-60).

A fashionably-dressed young man is helping to prepare a glass of lemonade for a young woman, who is equally open about her love of fashionable clothing. Behind her is the woman’s nurse or maid, who is having to comfort her through the excitement of the experience.

They are surrounded by a contemporary Dutch interior, with the inevitable bed lurking in the dark at the right, a small but heavily-built wooden table to the right, and a lighter-weight table at the lower left. Ter Borch has also painted what looks like a small inkpot on the floor at the lower right.

Ter Borch’s The Letter from about 1660-62 returns to his favourite theme of the reading and writing of letters. Two young women are working together, apparently to write a reply to the letter which is being read by the woman on the right. A boy, perhaps their younger brother, has just brought in a tray bearing an ornate pitcher of drink. In front, a small dog is curled up asleep on a stool.

Once again, ter Borch demonstrates his mastery of the depiction of fabrics.

I earlier mentioned ter Borch’s younger half-sister Gesina (1633–1690), who modelled for some of her brother’s paintings. By the 1660s, she had trained as a painter herself. Almost none of her work survives, but there is one painting which she and her brother painted together, in full Vanitas mode. This commemorated their younger brother Moses, also a promising artist, who was killed in the Second Anglo-Dutch War in the summer of 1667.

Their Memorial Portrait of Moses ter Borch (1645-1667) was painted between 1667-69, and is centred on his full-length posthumous portrait, surrounded by Vanitas symbols. Those include a snake, a butterfly, a watch, a small pipe, armour, an hourglass, a skull, shells, weapons, snails, fungal decay, and withering flowers. Gesina ter Borch never really recovered from Moses’ death.

Gerard ter Borch’s imposing Self-portrait was painted in about 1668, and portrays him as quite a dashing figure for someone of about fifty.

In ter Borch’s later work, his backgrounds become much lighter, as shown in The Music Lesson from about 1668. A teacher stands over a young woman, who is learning to play the lute. By this time, the basic lute had become extended to accommodate additional strings for a wider register. This is often referred to as a theorbo, although in modern terminology it is probably more of an archlute, and seems to have been fashionable in the Netherlands at this time.

Resting on the table is a cello, and asleep on a chair is a small dog. Note that the room still contains a bed in the background: the age may have been Golden, but separation of living and sleeping rooms had still not occurred.

Just as mothers had to check their children for parasites in the hair, so pet owners had to remove fleas from their pets. Ter Borch’s late painting of A Boy with his Dog, also known as The Flea-Catcher (after 1666), shows this, in fairly barren surroundings.

It is not clear whether Gerard ter Borch retired from painting in the 1670s, or none of his late works have survived. He died in Deventer in 1681, aged 63.

His paintings have remained reasonably well-known, and he has not been forgotten then re-discovered in the way that Vermeer was. His work gives fascinating insight into the homes and lives of the middle class during the Dutch Golden Age, and has had lasting influence on genre painting. His depiction of the fabrics used in clothing is still among the finest.