If you blog infrequently and post largely text content, spending money on an app like MarsEdit may not appear wise. But most of us are quite fussy, and the older you get and the longer you maintain your blog, the more fastidious you get. Once the content which you post includes plenty of images, and you need to refer back to previous articles, you really need a proper app for the purpose.

MarsEdit 3 was that app, and stood head and shoulders above anything else available for the Mac. It kept much of your blog locally, so that you could work entirely offline most of the time, organised articles very efficiently, and provided most of the writing tools you were likely to need.

It also had some drawbacks. It felt sluggish at times, particularly if you kept a lot of your articles in its database. I tried to keep my entire blog within it, but after I had around 1500 articles posted and active, it slowed unpleasantly, spinning the beachball quite frequently. When Sierra first came out, refreshing over a thousand local articles from the WordPress server brought my iMac to its knees for periods of several minutes, the task was so daunting.

For the last seven years or so, Red Sweater, the developers of MarsEdit, have been working on version 4. That was finally released earlier this week, and quickly updated to 4.0.1 with a few late fixes.

My answer on both counts is an almost unqualified yes. My only reservation is for those who really blog so little, and using only text, that working direct in your browser is sufficient. 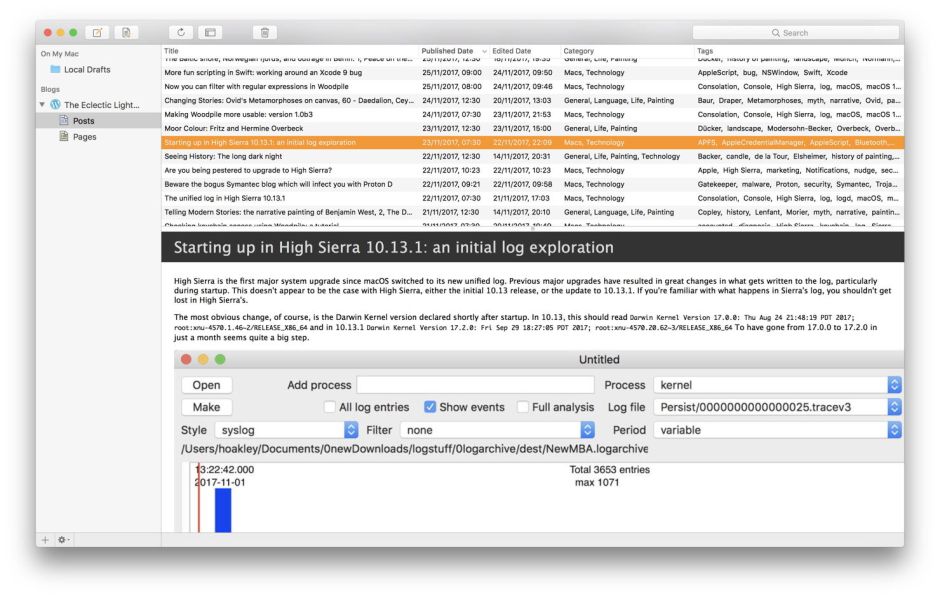 For me, the biggest improvement in MarsEdit 4 is its light feel: it is now highly responsive, and I haven’t seen a single spinning beachball since upgrading. It’s like switching to a nippy text editor from a rather overweight page layout app, only you get to keep all the features, and gain plenty more.

As important is the fact that, for the majority of blog services, MarsEdit can now keep all your previous posts in its local database. In my case, that’s close to three thousand, many of which have copious embedded images. Because I had to limit version 3 to keeping just the last 700 articles, I kept vast text files containing all my earlier posts. Searching them to locate the right image or other content was a major task.

Version 4 also supports more features of WordPress, such as featured images, the choice of post formats, and selection of author. I have barely started to use those yet, but as they work with previously-published articles, it is only a matter of time before I come to rely on them, I’m sure.

Editing has been greatly improved. There’s a convenient toolbar for the most common styles, such as Bold, Italic, link, and so on, although unlike the main toolbar in MarsEdit’s redesigned windows, that cannot (yet) be customised to contain the custom styles and tools which you can add to the Format popup menu. I’m hoping this will change in the future, as my Mac articles here often contain code sections, and I’d really like easier access to that.

I tend to work in plain text (HTML) page source, but if you prefer rich text, that is the supported alternative. The basic preview shown in MarsEdit’s main window has also been improved, and uses a template which you can customise to tweak it to closely match what you’d expect to see in your browser.

I have pared down the tools in my article editor window considerably, leaving just that to send the post to the blog, and the Format popup menu. MarsEdit 4 autosaves your work as you go along, so there is no need any more to keep clicking on the Save tool, which has, as a result, been removed. Writing in MarsEdit 4 is therefore as distraction-free as it gets.

If you’re still not convinced enough to upgrade or purchase, then visit Red Sweater’s site and download MarsEdit 4, or do so from the App Store. You’ll be able to use it without cost for a while, discover how it painlessly converts your existing MarsEdit 3 data, and I’ll be most surprised if you don’t buy it very shortly. It requires macOS 10.12 (Sierra) or later.