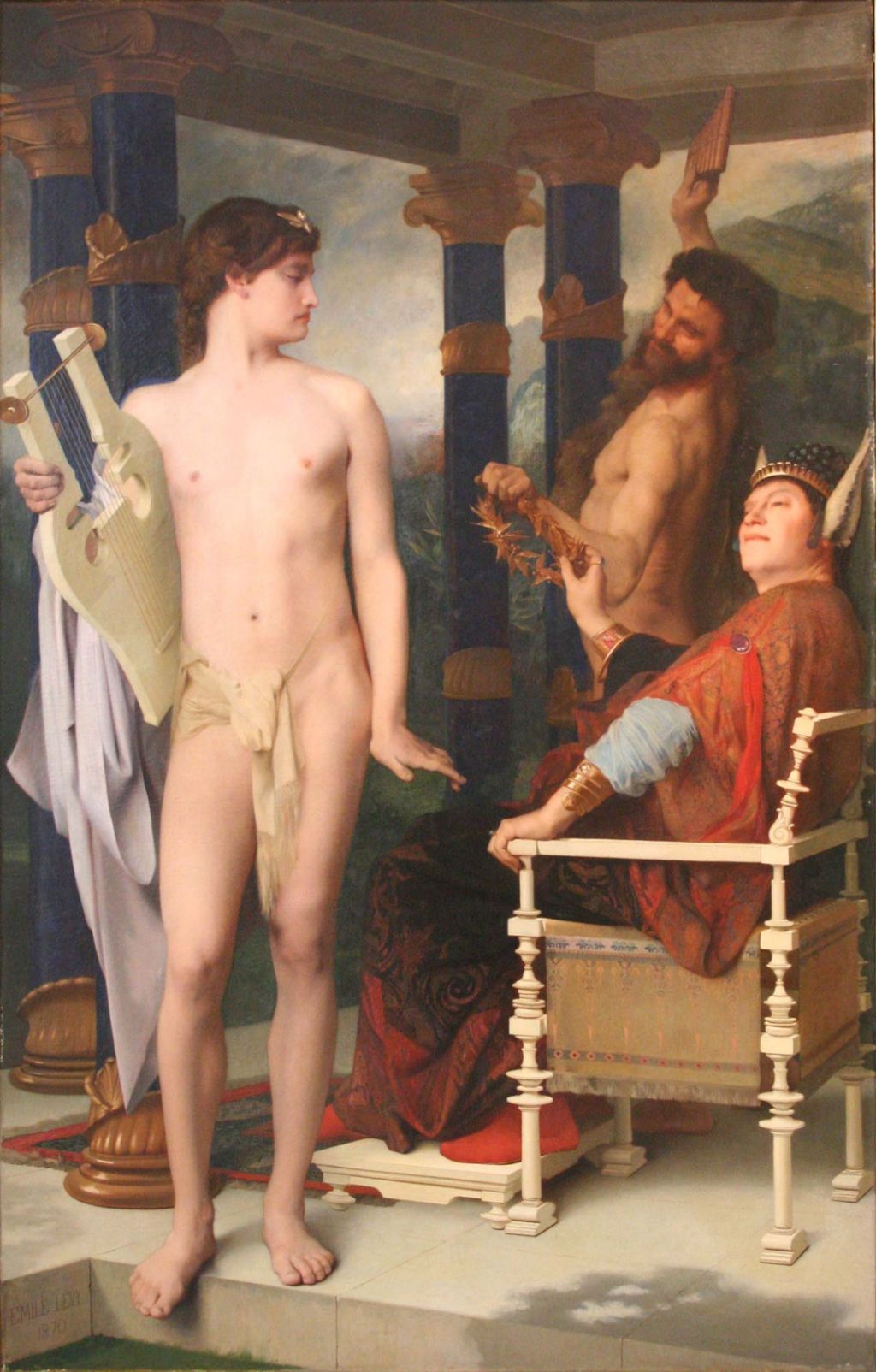 The tragic death of Orpheus at the hands of a mob of frenzied Bacchantes was a very powerful opening story for Book 11 of Ovid’s Metamorphoses. He follows that with a complete contrast, a connection brought by the god Bacchus. Here are two rather gentler and more humorous stories about King Midas.

Bacchus left the scene of Orpheus’ death, where the Bacchantes had been turned into an oak wood, and wandered to the River Pactolus, which was later known for its golden sands. As was usual, Bacchus was in the company of his friends, although one, Silenus, was absent. He was returned to the group by King Midas. To celebrate the return of Silenus, Bacchus invited Midas to ask for whatever he wanted as a boon.

King Midas then wished that everything he touched should be turned to gold.

His wish was granted, and at first Midas was delighted and amazed with his new power. He turned a twig to gold, then a stone, a lump of earth, ears of wheat, an apple. When he put his hands into running water, it too flowed gold.

But when he tried to eat, the food that he touched turned to gold before he could put it into his mouth, so too the wine that he was about to drink. Midas admitted to Bacchus how his boon was proving such a disaster, and pleaded for his power to be removed. Bacchus told him to go and wash his crime away in the headwaters of the River Pactolus, which coloured that river and its sands gold from contact with the king:
King Midas did as he was told and plunged
beneath the water at the river’s source.
And the gold virtue granted by the god,
as it departed from his body, tinged
the stream with gold. And even to this hour
adjoining fields, touched by this ancient vein
of gold, are hardened where the river flows
and colored with the gold that Midas left.

Having told us an unusual story in which one of the mortal characters performs all the transformations, albeit with the aid of a god, and accounting for natural gold in a river, Ovid moves on to tell a story about Midas and a music contest. This has similarities with that between Apollo and Marsyas, but lacks its gruesome ending.

Having developed a real loathing for riches, Midas led an outdoor life with the god Pan, but unfortunately still did stupid things. Pan sang and played his pipes, making music which he claimed was even better than that of the god Apollo – a boast which resulted in a contest between them, with Tmolus as the judge.

Pan played first, then Apollo, and Tmolus gave his verdict in favour of Apollo’s lyre, to everyone’s pleasure, apart from Midas who considered that unjust. In return, Apollo transformed Midas’ ears into those of an ass:
The Delian god forbids his stupid ears
to hold their native human shape;
and, drawing them out to a hideous length,
he fills them with gray hairs, and makes them both
unsteady, wagging at the lower part:
still human, only this one part condemned,
Midas had ears of a slow-moving ass.
Midas, careful to hide his long ears, wore
a purple turban over both, which hid
his foul disgrace from laughter. But one day
a servant, who was chosen to cut his hair
with steel, when it was long, saw his disgrace.
He did not dare reveal what he had seen,
but eager, to disclose the secret, dug
a shallow hole, and in a low voice told
what kind of ears were on his master’s head.
All this he whispered in the hollow earth
he dug, and then he buried all he said
by throwing back the loose earth in the hole
so everything was silent when he left.
A grove thick set with quivering reeds
began to grow there, and when it matured,
about twelve months after that servant left,
the grove betrayed its planter. For, moved by
a gentle South Wind, it repeated all
the words which he had whispered, and disclosed
from earth the secret of his master’s ears.

Of the two stories about King Midas, only one has become so ingrained in European culture that it has entered our languages with ‘the touch of Midas’ and the like. Oddly, that is the one which has been painted less.

Walter Crane’s book illustration of King Midas with his Daughter, published in 1893, seems to be one of the few works telling this directly. It shows the hapless king, surrounded by all the gold objects which he has touched, his daughter dead on his knee, cold and gold.

Nicolas Poussin (probably) painted a remarkable and subtle work showing Midas Washing Himself in the Source of the Pactolus in 1627. Midas is almost out of sight at the left, but his touchmark gold is seen on the wreaths crowning the others present, and glowing on the nose of rock above them.

The second more humorous story has strong similarities with the tragic musical contest between Apollo and Marsyas, which ended with the satyr being flayed alive in punishment. Unfortunately this has led to confusion, more commonly in the titles given to paintings later, but sometimes on the part of the artist.

Domenichino included The Judgement of Midas as part of the superb frescoes he and his workshop painted in the Villa Aldobrandini in 1616-18. Midas stands proud in his folly, his ass’s ears plain to see, with Apollo and Pan on each side. Amazingly, seven chalk drawings made for this have survived, and are in the British Royal Collection.

This jewel of a painting by Hendrick de Clerck, showing The Contest Between Apollo and Pan and painted in about 1620, just after Domenichino’s frescoes, must be one of the most beautiful I have come across in this series. Pan holds his pipes and dances at the right, and Apollo is seen bowing an early form of violin just to the left of centre. Between them are Tmolus, the judge next to Apollo, and Midas, with his ass’s ears.

Seven Graces are also present, and Minerva is talking to Apollo.

Just a few years after that, Nicolas Poussin (probably, again) painted his version of Midas and Bacchus (1629-30), in which he shows a rather different group. The centre trio are, from the left, Apollo, Pan (with his pipes), and King Midas, with fairly regular ears. At the far left, Bacchus has nodded off at the table, presumably from his customary excess of wine. In front could be Venus, perhaps, and there are sundry figures scattered, including two putti who are wrestling with a black and white goat. I’m not sure of a coherent explanation for them all!

After this flurry of interest in the story, it seems to have slipped back into obscurity until the late nineteenth century, when the Impressionists were first getting organised.

Émile Lévy’s painting of The Judgement of Midas was completed in 1870, and is as clean and uncluttered as Crane’s later illustration. Apollo stands in disdain, in a position which would appear seriously homoerotic. Seated, with his ass’s ears and a facile smile all over his face is King Midas, who is passing a gold laurel crown – a reference to his earlier golden touch – to Pan, who holds his pipes aloft in victory.

Although Lévy has taken a bit of a liberty with Ovid’s stories, it is an ingenious narrative trick to pull, and very effective. He really was a brilliant narrative painter.