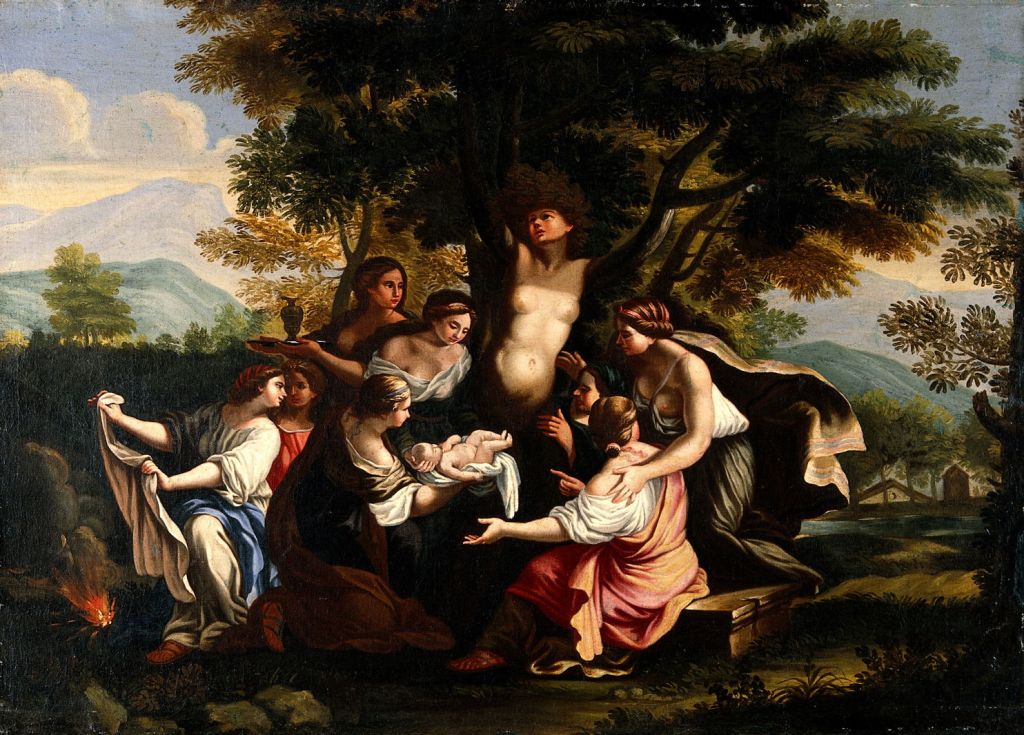 Book 10 of Ovid’s Metamorphoses follows the story of Pygmalion’s marriage to his former statue with a darker tale of incest, transformation, and obstetrics in the arboretum.

Myrrha was the great granddaughter of Pygmalion, but cursed by the Fates and blighted in love. Although she had many suitors, she fell in love with her father, King Cinyras. Ovid relates her long soliloquy in which she wrestles with her own mind over this. When her father asked her what to do about her suitors, she first stayed silent, then burst into tears, eventually telling him that she wanted a husband like her father.

That night she lay awake in bed, her mind in turmoil, until resolving that her only solution was suicide. She tied a noose around a beam in her bedroom, and was just about to hang herself from it when her old nurse came in. Eventually, Myrrha confessed her shameful desire, and her nurse promised to arrange the matter for her.

When the festival of Ceres came, Cenchreis, Myrrha’s mother, was busy with her duties, allowing the old nurse to arranged Myrrha’s liaison with her father. The nurse ensured that Cinyras had plenty to drink, and promised him a night making love to a girl as young as his daughter.

Later that night, the old nurse took Myrrha to her father, and put her to bed with him, from which Myrrha became pregnant. Myrrha and her father continued to sleep together, night after night, Cinyras still oblivious of who his partner really was. Eventually, he brought in a lamp so that he could see her, and was shocked to discover his own daughter.

He drew his sword to kill her, but she fled and wandered in the desert until it was time for her child to be born. Myrrha called on the gods to help her, but wanted to neither live nor die:
Some god did listen
to her unnatural prayer; her last petition
had answering gods. For even as she prayed,
the earth closed over her legs; roots grew out
and, stretching forth obliquely from her nails,
gave strong support to her up-growing trunk;
her bones got harder, and her marrow still
unchanged, kept to the center, as her blood
was changed to sap, as her outstretching arms
became long branches and her fingers twigs;
and as her soft skin hardened into bark:
and the fast-growing tree had closely bound
her womb, still heavy, and had covered her
soft bosom; and was spreading quickly up
to her neck. — She can not endure the strain,
and sinking down into the rising wood,
her whole face soon was hidden in the bark.
Although all sense of human life was gone,
as quickly as she lost her human form,
her weeping was continued, and warm drops
distilled from her (the tree) cease not to fall.
There is a virtue even in her tears —
the valued myrrh distilling from the trunk,
keeps to her name, by which she still is known,
and cannot be forgot of aging time.

Having been transformed into a tree, Myrrha then provided the precious resin myrrh from her sap. But she still had another very important role to play:
The guilt-begotten child had growth while wood
was growing, and endeavored now to find
a way of safe birth. The tree-trunk was swelling
and tightened against Myrrha, who, unable
to express her torture, could not call upon
Lucina in the usual words of travail.
But then just like a woman in great pain,
the tree bends down and, while it groans, bedews
itself with falling tears. Lucina stood
in pity near the groaning branches, laid
her hands on them, and uttered charms to aid
the hindered birth. The tree cracked open then,
the bark was rent asunder, and it gave forth
its living weight, a wailing baby-boy.
The Naiads laid him on soft leaves, and they
anointed him with his own mother’s tears.

Thus Adonis was born, and anointed with myrrh.

Surprisingly, the story of Myrrha, her incestuous pregnancy, and the birth of Adonis was popular both in words and images. There are several different accounts in classical sources, but it has been seldom re-told in more modern times.

Although an apparently difficult story to present to pious Christians, it was also quite a popular subject for paintings between 1500-1700. Thereafter it has been shunned.

Possibly one of Titian’s earliest works, although this is disputed and even Giorgione has been credited, this cassone panel of The Birth of Adonis probably dates from 1505-10. At the left, Myrrha and her father Cinyras lie together, although this would make certain his knowledge of her identity, of course. In the centre, a baby is delivered from the woody womb of Myrrha, as a tree. This multiplex narrative is set in an idyllic rustic landscape.

At about the same time, Bernardino Luini painted his fresco account of The Birth of Adonis (1509-10), which also looks to adopt multiplex narrative to explain the shameful origin of Myrrha’s pregnancy. In the foreground, the couple are shown together (although this could instead be a reference to Adonis in later life), and at the top left the miraculous birth has just taken place.

Over a century later, this wonderful panel showing The Birth of Adonis and Transformation of Myrrha was painted, possibly after Luigi Garzi, although again its maker is disputed. Reference to Myrrha’s dark past has been concealed, and she is here shown as a chimera between woman and tree, with the infant Adonis just delivered by a large team of midwives and maids.

The helper at the right wears a coronet with the crescent moon on it, signifying the goddess Diana, perhaps. On the left side of the tree, one of the other helpers is holding up a tray with a small container of myrrh, with which to anoint Adonis. In the foreground, a wingless putto is laying out a napkin for the infant.

One artist painted this story repeatedly: Marcantonio Franceschini, a Baroque painter in the Italian city of Bologna.

This version of Franceschini’s The Birth of Adonis probably dates from around 1685-90, and is now in Dresden. Myrrha is a distinctive cross between tree and woman, and a couple of satyrs are laughing in the bushes behind her. Two young women are rather pointedly looking in amazement at the origin of Myrrha’s baby. In the centre, Adonis is being given by Diana, with her crescent moon, to Venus, who stars in his later life, and is already admiring his beauty.

Franceschini’s later version from around 1692-1709 is now in Vienna, and re-arranges a similar composition in a vertical format. Here Diana is handing Adonis over to another goddess, possibly Venus, who is preparing to take the role of wet-nurse. Behind them, the two women looking in amazement appear to be less anatomically engaged, and Pan and a satyr are providing some celebratory music. The napkin-bearing putto is here a winged Cupid.

Apart from a slightly later painting by Boucher, which I have been unable to illustrate here, those seem to have been the last paintings of this disturbing story of the origins of myrrh, and of Adonis.