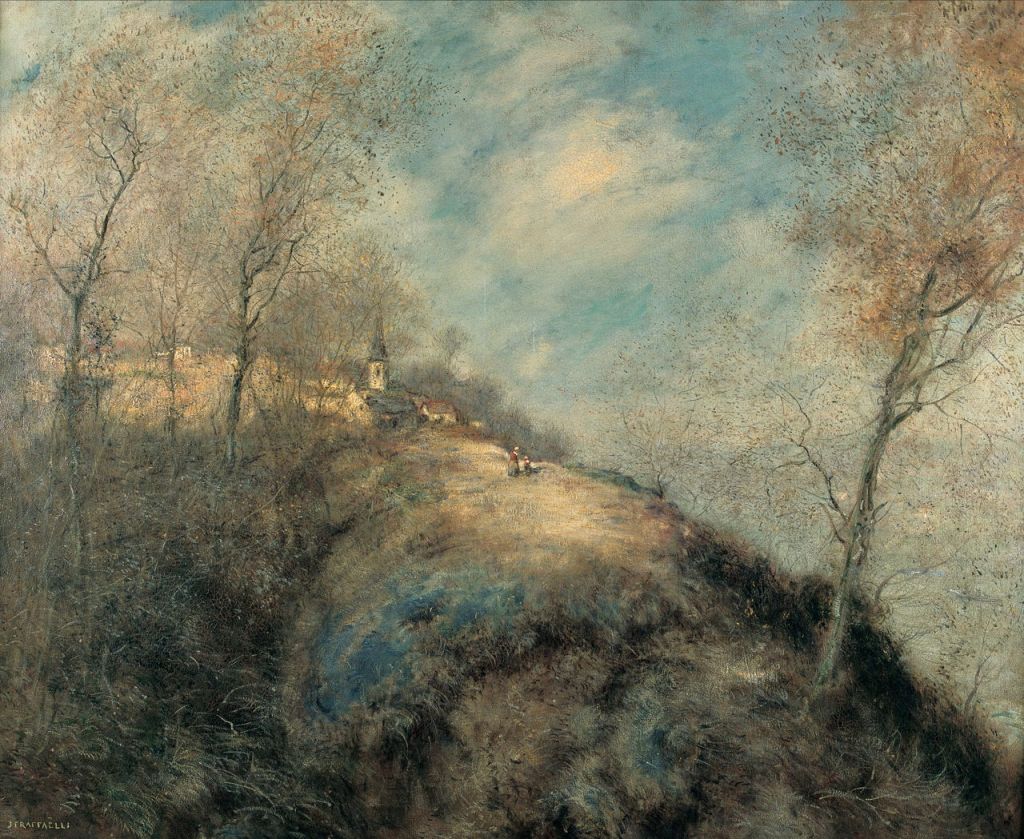 One of the frequent points of friction between Degas and most of the other Impressionists was his choice of artists to include in the movement and its exhibitions. As I have explained with respect to the First Impressionist Exhibition of 1874, many of those who showed their work there had no prior or subsequent connections with Impressionism.

The one artist who epitomised these issues was a friend of Degas, Jean-François Raffaëlli (1850-1924). Born in Paris but of Italian descent, he started to paint seriously in 1870 and had a landscape painting accepted for the Salon of that year. The following year he undertook just three months of study under Jean-Léon Gérôme, which formed his only training.

During the mid-1870s, Raffaëlli started painting the poorer residents of Paris and its surrounds. The Ragpicker (1879) was a great success, and his work was promoted by the influential critic Joris-Karl Huysmans. At about this time, he joined Degas’ circle, and the latter helped his career and repeatedly tried to bring him into the Impressionist movement and its exhibitions.

Man with Two Loaves of Bread (1879) is another painting from Raffaëlli’s series of social realist works.

In his The Absinthe Drinkers (c 1880-81) he followed from Manet’s first major painting of about 1859, and a theme which Degas had also painted in 1875-76. Degas’ version had met with a very hostile reception, and at this time was being stored.

Raffaëlli had threatened to overwhelm the work of the ‘real’ Impressionists at their exhibition in 1880, when he showed thirty-seven works, and forced Monet to withdraw altogether in response. Raffaëlli’s The Absinthe Drinkers was exhibited the following year, when it was one of the few works to attract widespread critical approval.

Guests Waiting for the Wedding (before 1884) also seems to have been well-received.

Raffaëlli’s undated Sailors from the North confirms his realist style.

Although Old Woman in the Snow is also undated, I suspect that it came from this period of social realism.

During the 1880s, Raffaëlli’s style moved on, and in some respects became more Impressionist, as shown in this more painterly view of The Outskirts of Paris (c 1880-90).

At the Caster’s (1886) is a detailed depiction of work being undertaken by Eugène Gonon to cast a relief, which had been exhibited as a plaster cast at the Salon of 1883. The resulting bronze is now at the Palais Bourbon in Paris. Raffaëlli was also a sculptor, although little if any of his sculpture seems to have survived.

Raffaëlli also became more experimental in his choice of media: this version of Parisian Rag Pickers from about 1890 was made using mixed media of oil paints and oil crayons.

From about 1890, though, Raffaëlli concentrated on paintings of Parisian street scenes, such as his Notre-Dame de Paris (1890-95), and in print-making, although I have not been able to locate any of his prints.

Raffaëlli’s painting of The Fletcher Mansion, New York City from 1899 must have been painted during Raffaëlli’s second visit to the US, when he served on the jury of the Carnegie International Exhibition in Pittsburgh in 1899. The mansion was the private residence of Isaac D Fletcher and his family, and stood on the southeast corner of Fifth Avenue and 79th Street. The building was only completed in 1898.

Around the turn of the century, Raffaëlli’s style became more painterly again, and could perhaps be termed Impressionist, as shown in his Les Champs-Elysées (c 1900).

Raffaëlli still kept quite fine detail in this view of Notre Dame Seen from the Quai de la Tournelle (c 1897-1902).

The Abandoned Road (1904) is, to my eye, one of Raffaëlli’s finest paintings, showing where an old road running along the top of a sea cliff had been lost in a large landslip. The whaleback ridge in the foreground has an almost animal feel to it, and his use of figures and the small village gives the scene a grand scale.

The Boulevard shows the Boulevard des Italiens in Paris, and probably dates from 1900-05. His style is here at its loosest, with the figures made very gesturally, and details of buildings appear to have been sketched briskly.

This painting of a Street in Asnières was probably made at about this time. Asnières has now been swallowed up as a suburb of Paris, to the north-west, and sits on the north bank of the River Seine.

The Water’s Edge in Spring shows Raffaëlli’s sketchy style from 1909.

Boulevard Saint Michel (1918) is another view of a famous street in Paris, this time in the Latin quarter near the Sorbonne and Luxembourg Gardens.

In his day, Raffaëlli was successful, and his views of Paris were particularly popular. Since his death in 1924, though, his art has largely been forgotten, despite the fact that his paintings are in many major public collections throughout Europe, North and South America.