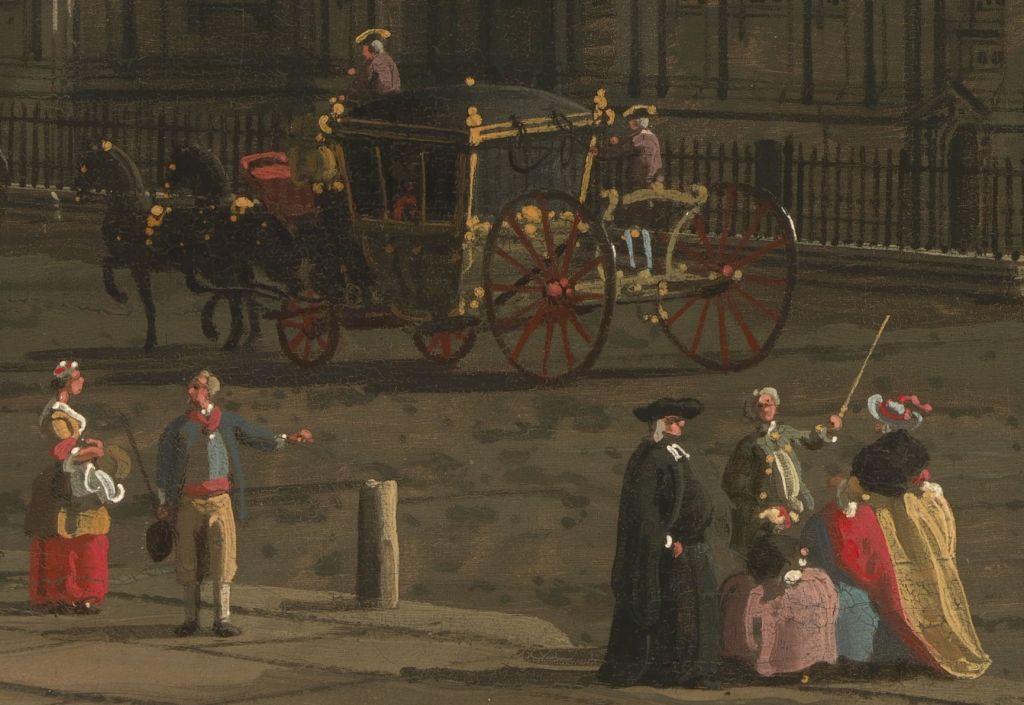 Pure landscape paintings by specialist landscape artists were uncommon before about 1700 – those of the Dutch Golden Age, such as the master-pupil partnership of Jacob van Ruisdael and Meindert Hobbema, were among the exceptions. When the genre became established in the eighteenth century, it was largely due to the demand for ‘views’, and the success of painters such as Canaletto in meeting that demand.

This article looks in detail at the figures painted by Canaletto (Giovanni Antonio Canal, 1697–1768) in a range of his landscape paintings, to consider their role.

Widely known as The Stonemason’s Yard, and held to be among Canaletto’s finest paintings, his view of Campo S. Vidal and Santa Maria della Carità from about 1725 features fewer and larger figures than many of his later works.

Most of its people are in the lower left corner, which is a hive of activity, as shown in the detail below.

At the top left corner of the detail, a woman leans out over a balcony as if calling to those below her. In the middle of the foreground, another woman, who has been sweeping with the broom behind her, raises her arms towards an infant, who appears to have fallen on their back and is now urinating. Another older child stands watching.

Caught in the same patch of sunlight, on the right, a stonemason is working with hammer and chisel. Further back, in the shade, three other figures are talking or passing the time inactively. Behind them a man, his back to the viewer, is talking to three gondoliers who are stood in their boats. More distant figures are also seen scattered along the opposite bank of the canal.

These figures populate the space without telling us anything specific about it or them. They give the image a realism by their everyday routine nature and activities. They are pure staffage.

This view of Canale di Santa Chiara, Venice from a few years later, probably around 1730, is more typical of Canaletto’s better views of Venice. There is a fairly even spread of figures along the pavement in front of the buildings, and they are dispersed among the gondolas on the canal.

The detail below reveals them to be engaged in similar everyday routines: talking, walking, a man and child standing at a shop front. They’re all well dressed, but without distinction, apart from the gondoliers who wear typical costume for the job.

When he was in England, Canaletto painted some more rural views, including this fine view of Alnwick Castle in about 1750. Dotted fairly evenly across its very green grass are more figures, shown below in better detail.

Only one group appears to be working at any real activity: the two men in the foreground, at the lower left corner, who appear to be using a crowbar on something in the riverbank. Canaletto does not afford us a clear view of what they are doing, though.

Around the castle, there is a shepherd and companion with an unrealistically tiny flock of sheep, and three small groups of people talking, looking, or just present. These all seem remarkably everyday, even humdrum.

This imposing view of St. Paul’s Cathedral from about 1754 shows a similar phenomenon in a thoroughly urban context: a fairly even scatter of small clusters of figures, none of which is doing anything out of the ordinary. Indeed, there is some degree of repetition: two small dogs echo one another, for example, and there is another man standing with his walking stick raised in the air, just as at Alnwick Castle.

These gestures, shown more clearly in the detail below, are familiar, and everyday.

Some of Canaletto’s views feature crowds too. The Bucintoro at the Molo on Ascension Day (1759-61) is an example, with many packed vessels, and large numbers seen along the water’s edge.

Although the quality of the detail image below is not ideal, it makes clear how they are simply going about their business, doing the everyday.

Throughout his career painting views, whether of Venice or overseas, Canaletto populated those paintings with a fairly even spread of figures. They add colour and ‘human interest’, give the air of realism, and enhance the effects of perspective. But looking at them more carefully, they seem a little too even and consistently spread.

The following three views of Piazza San Marco painted over a period of almost forty years show how consistent is Canaletto’s staffage, again almost to the point of being repetitive.

I am not suggesting that Canaletto invented staffage, but he was certainly one of its first major exponents. His figures adorn and enhance what he was really most interested in: the buildings, structures, and their details – the landscape or cityscape, not its inhabitants.