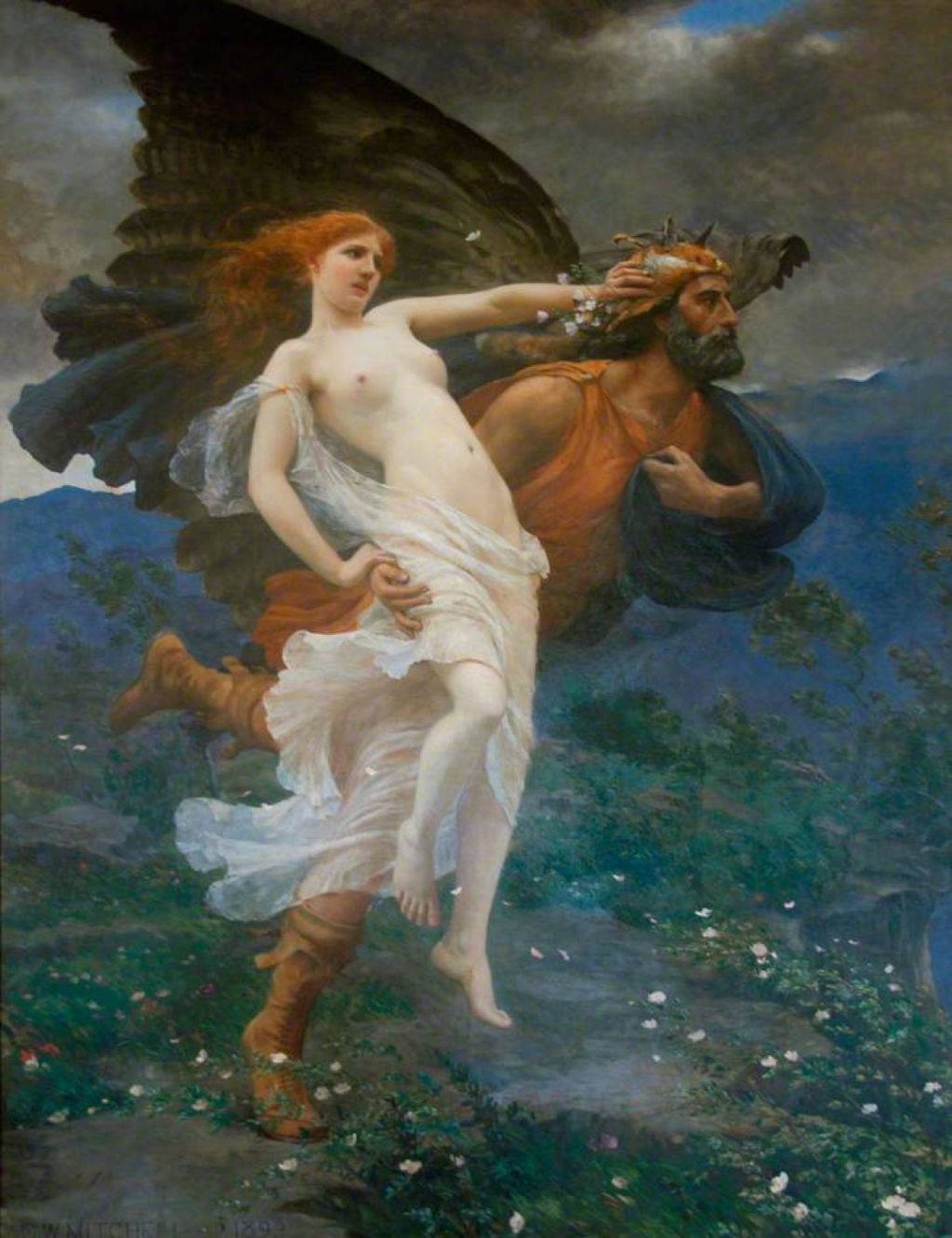 Following Ovid’s long account of the grim story of the rape and mutilation of Philomela, he ends Book 6 of his Metamorphoses on a lighter and happier note, which also forms a bridge to the opening theme of the next book: Jason and the Argonauts.

Ovid uses a tenuous link to introduce Boreas, the north wind: Philomela and Procne were the daughters of Pandion, who died prematurely as a result of the events of the last myth. He was succeeded by Erechtheus, who had four sons and four daughters. Of his daughters, two were egregiously beautiful: Procris, who married Cephalus, and Orithyia, who was betrothed to Boreas.

After the disgrace of Tereus, the King of Thrace, Boreas, also a Thracian, was rejected by Erechtheus. This was despite Boreas’ attempts to reform his habits, which normally made him bitterly cold, stormy, and damaging.

Boreas decided to take matters into his own hands, flew down, and abducted Orithyia:
And now impetuous Boreas, having howled
resounding words, unrolled his rustling wings —
that fan the earth and ruffle the wide sea —
and, swiftly wrapping untrod mountain peaks
in whirling mantles of far-woven dust,
thence downward hovered to the darkened world;
and, canopied in artificial night
of swarthy overshadowing wings, caught up
the trembling Orithyia to his breast:
nor did he hesitate in airy course
until his huge wings fanned the chilling winds
around Ciconian Walls.
There, she was pledged
the wife of that cold, northern king of storms;
and unto him she gave those hero twins,
endowed with wings of their immortal sire,
and graceful in their mother’s form and face.

Ovid closes the book by telling us that their twin sons, Calais and Zeto, grew up to join Jason’s Argonauts.

Metamorphoses gives only a brief summary of this vivid story which was popular in classical times, to the point of being the subject of a now-lost play. The myth has remained popular in paintings since classical times, and makes an interesting theme with which to trace the history of painting, at least from the Renaissance to 1900. Here are my favourites.

Rubens painted Boreas Abducting Orithyia in about 1620, and the result is a fine work from one of the greatest narrative artists at the peak of his career.

Boreas is shown in his classical guise, as a roughly-bearded old man with wings, which comply in detail with Ovid’s description of their colour too. He is sweeping Orithyia up in his arms, while a cluster of Cupids are engaged in a snowball fight – a lovely touch of humour, and a subtle reference to winter.

A few years later, probably in about 1640, Giovanni Francesco Romanelli painted Boreas Abducting Orithyia. Here Boreas has made his getaway with Orithyia, and is flying over a wintry landscape with a Cupid escort.

Sebastiano Conca’s Boreas Abducting Orithyia from about 1720 shows Boreas taking off with Orithyia from a riverbank and her friends, some of whom are decorating a herm statue (at the right). However, without any reference to winter we have to take the identity of the couple on trust.

Francesco Solimena seems to have been the first painter to depict Boreas as a much younger man, in his Boreas Abducting Orithyia, Daughter of Erechtheus (1729). He has also elaborated the scene considerably, with Orithyia’s friends tugging at Boreas’ cloak to try to restrain him, Cupid preparing to shoot one of his arrows at Orithyia, and general panic ensuing. Again, there seems no specific reference to winter.

François Boucher delivers a full Rococo interpretation in Boreas Abducting Orithyia (1769). The lead actors seem far less engaged, with Boreas devoting his efforts to blowing his wind at Orithyia’s friends, and the ground to the right bearing witness to his destructive force.

In 1822, Joseph-Ferdinand Lancrenon’s romantic interpretation of Boreas Abducting Orithyia strips out all the other figures, and shows just the couple themselves. Boreas is now quite youthful, and Orithyia’s eyes are closed as if she is in a swoon, or asleep. Although the sky is dark and stormy, there is nothing wintry to indicate that this is Boreas rather than any other winged figure. Links to the original narrative are being lost.

Charles William Mitchell’s The Flight of Boreas with Orithyia from 1893 returns to a fuller and more classical account. Although not as old as in the earlier paintings, Boreas is no longer a stripling. Orithyia is trying to push his head away, and unfasten his right hand from her thigh, but Boreas is just about to take her airborne. Around them the spring flowers and trees are being blasted by his north wind.

My final selection is Evelyn De Morgan’s Boreas and Orithyia from about 1896. Boreas is now bearing Orithyia aloft, above quite rugged hills and water. He is younger again, and looks decidedly miserable. In addition to a pair of magnificent wings on his back, he has accessory wings on each heel. Long white and blue sheets wind calligraphically around the couple, but there is a lack of wintry symbols.

Those are eight wonderful paintings which really bring Ovid’s story to life. Personally, given a choice, I would want to take the Rubens and Mitchell’s paintings, which seem to have captured it best of all.