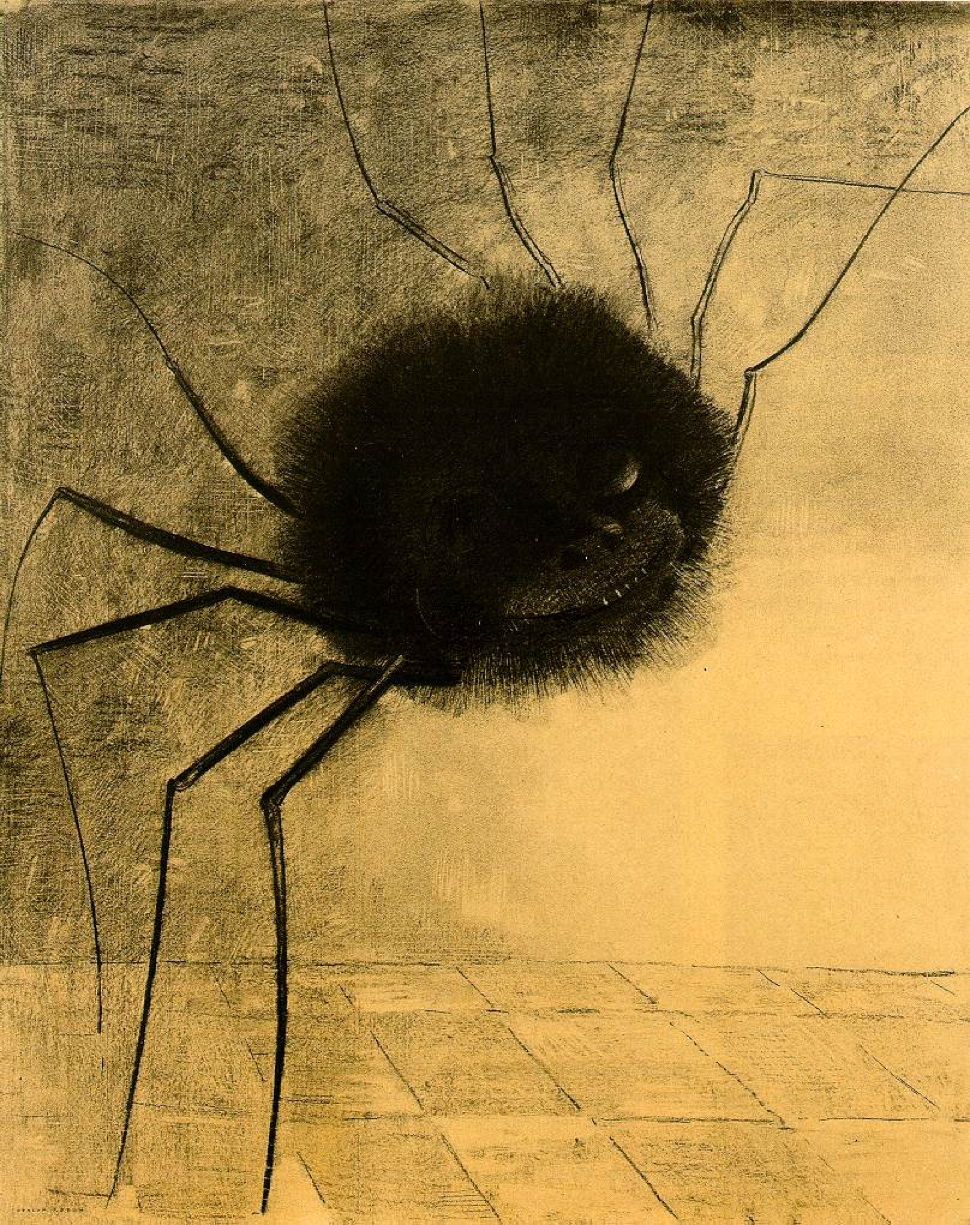 Writing about Ovid’s story of Arachne made me wonder when spiders and their webs started to become popular motifs in visual art. After extensive searching, the answer came as quite a surprise.

Woven threads have a very special meaning in the context of the thread of fate, or of life. I have already looked at its depiction, in paintings influenced by both Mediterranean and Nordic cultures, in this article.

Amazingly, there was also a fashion for paintings to be made on cobwebs; although this Wikipedia article doesn’t show any examples, perhaps they are now too fragile and friable even to photograph.

Considering how commonplace spiders and their webs are, they have only rarely appeared in paintings and prints.

Juan de Arellano’s workshop made An Allegory of the Sense of Touch probably around 1640-50. It contains an unusual catalogue of distinctive sensory stimuli, including snails, massively enlarged tics, a tortoise, and a spider’s web, with a couple of black spiders suspended from it.

Brueghel’s and other allegories of this sense exclude spiders and their webs, although I’m sure that we all know well that distinctive feeling of brushing past a cobweb.

Another odd place for a spider and its web is Girodet’s Portrait of Mlle. Lange as Danae (1799). This was a revenge portrait intending to uncover the shady side of its model, as detailed here. With her cast in the role of a money-grabbing version of Danae, right at the top of the canvas is a spider collecting some of the falling gold coins in its web (detail below).

There were no doubt a few other paintings before 1850 which slipped in the odd cameo appearance of a spider or its web, but they seem remarkably few and far between. Several paintings showing the transformation of Arachne into a spider – surely an ideal opportunity for a quick arachnid – somehow omit any depiction of spiders or their webs.

Then in about 1867, Gustave Doré’s engraving of Arachne for an edition of Dante’s Purgatory suddenly made the ‘spider woman’ visually explicit. Was this perhaps the origin of subsequent images?

Odilon Redon’s extraordinarily inventive mind was to follow, first with this charcoal drawing of l’Araignée qui pleure (The Crying Spider) in 1881, above, then in his later lithograph of L’Araignée (The Smiling Spider), from 1887, below.

Another storyline which brought spiders into paintings was the traditional English children’s rhyme of Little Miss Muffet:
Little Miss Muffet
Sat on a tuffet,
Eating her curds and whey.
Along came a spider,
And sat down beside her,
And frightened Miss Muffet away.

This appears to have been painted first by John Everett Millais, in his Little Miss Muffet of 1884. You can be forgiven for not being frightened by the spider which sat down beside her, as it is in fact a rather small golden speck half way up the left edge of the canvas, and most of Miss Muffet’s fright seems to be the result of a twig touching her back.

Then there was Fernand Le Quesne, purveyor of images of cavorting bevies of pretty nude women, who showed them around The Spider’s Web (1892), its size and solidity being more typical of a horror movie fifty years or more later.

Some webs were brought into later symbolist paintings, such as this geometrically-regular version in Mikalojus Konstantinas Čiurlionis’ Finale, the fourth and last in his series Sonata of the Sun (1907).

It wasn’t until about 1910 that Walter Crane produced the first spidery illustration of Ovid’s story of Arachne, in his She Changed her into a Spider. At last someone had recognised the value of showing Arachne’s ultimate fate.

Spiders and their webs had also been starting to appear in more illustrative work, such as Theodor Kittelsen’s In the Cobwebs (1910).

A second image showing the the children’s rhyme is Helen Hyde’s etching and aquatint of Little Miss Muffet (1918). This is even stranger than Millais’ painting: I can see no sign of any spider, but there’s a rather large white chicken where I would have expected the spider to have been.

I have not looked at many works beyond the West, but there does seem to have been a more established tradition in east Asia, particularly Japan.

A few prints from Japan, here by Ichinaka Sanjin Yūsa (市中散人祐佐) in 1732, show Jorōgumo (Spider Woman). This tops the spider and web count for any work that I have seen, with at least five of each.

One of the most distinctive prints of a spider and its web is, as you might have expected, that by Katsushika Hokusai in his view of Mount Fuji Behind a Spider’s Web, from the early nineteenth century.

It was the advent of movies and comics during the twentieth century that saw the humble spider hit the public eye. Fritz Lang seems to have been the innovator, with an adventure series featuring a criminal gang called the Spiders in 1919-20. The advent of Spider-Man comics in 1962 opened the floodgates, and images of spiders are now widespread. It looks like it was Gustave Doré and Odilon Redon who started all that off, and put the horror into spiders.