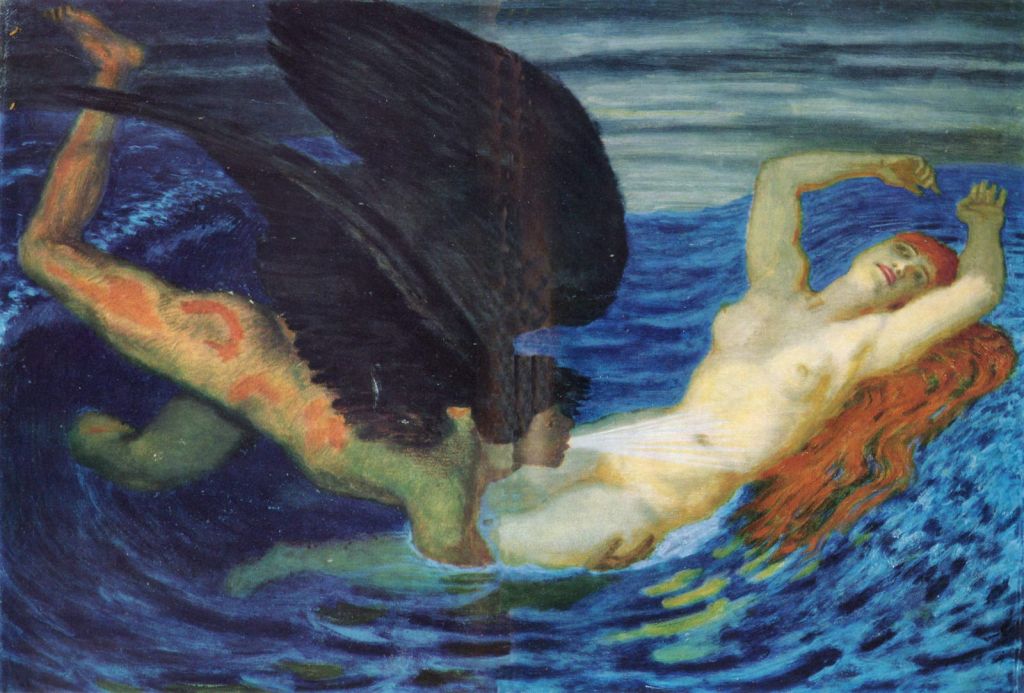 By the start of the First World War, Franz von Stuck was successful, ennobled, and had just had a new studio built at his Villa Stuck in Munich. One of its features, a dedicated floor for sculture, was never used for that purpose, because on the outbreak of war he ceased making sculpture. Thankfully, he continued to paint innovative and exciting narrative paintings.

Von Stuck continued to delight in exploring the mythical life of fauns, and in particular their playing reed pipes, in A Faun Blowing Reed-Pipes (1914). Munich may be almost as far from the sea as you can get in Europe, but the artist painted several of these mythical scenes at the seaside. Unfortunately the limited biographical information that I have doesn’t reveal whether he may have holidayed on the Mediterranean, perhaps, which would seem the most likely setting here.

Hercules and the Lernean Hydra (1915) is von Stuck’s account of the encounter between Hercules (Heracles) and the monstrous Hydra during the second of his labours. This had been depicted by Gustave Moreau in his painting of the same name in 1876, which von Stuck may well have seen.

The Hydra was a poisonous monster with multiple serpent-like heads on the body of a dog, which could kill with its breath alone. Living on the Lernean marshes near Argos, for the second of his twelve labours Hercules was charged with killing it. He covered his face with a cloth to protect from the Hydra’s deadly fumes, and tried cutting its heads off.

However, for each head that he removed, two grew back. Enlisting the assistance of his friend Iolaus to cauterise the severed heads with fire, Hercules managed to remove the one immortal head using a golden sword provided by the goddess Athena, and that killed it.

Von Stuck took a symbolist approach, simplifying his subject to that of the hero swinging his sword at the multiple heads of the Hydra – a powerful image indeed.

As the war was ending, von Stuck returned to his favourite faun motif, in A Faun and a Mermaid (1918). This has survived in two very similar versions, the other of which is now in the Alte Nationalgalerie in Berlin. His mermaid is a maritime equivalent of a faun, with separate scaly legs rather than the more conventional single fish tail. She grasps the faun’s horns and laughs with joy as the faun gives her a piggy-back out of the sea.

Unfortunately, after the War, interest in von Stuck’s art declined quite quickly, as Europe was swept by the new modernists.

Sisyphus (1920) may have expressed von Stuck’s increasingly difficult task of attracting attention to his art, and perhaps resulting self-criticism. Another simple, bold, and powerful image, it may have been inspired by Titian’s famous painting of the ancient Greek mythical king.

Sisyphus was the founder king of Ephyra, who was greedy, cheated, and violated his moral obligations to guests and travellers by killing them. As punishment for these crimes, he was condemned to roll a huge boulder up a steep hill, as shown in this painting. This is the basis of the English phrase a Sisyphean task, which is endless and futile.

Rather than paint the traditional story of the Judgement of Paris, von Stuck opted to show The Three Goddesses Athena, Hera and Aphrodite (1923). These are the three who were judged in the ‘beauty’ contest by Paris, alias Alexander, which led to the war against Troy.

Conventionally, the three goddesses are shown with Paris as judge, Hermes, and sundry attendants, often as an opportunity to paint three beautiful nudes on a single canvas. Von Stuck does not duck that, but builds his story more with the goddesses themselves than the contest. Athena, at the left, is shown with her helmet and spear in her Pallas mode, and holds a large shield, her Aegis, on which is the image of the head of a Gorgon.

Hera (centre), both sister and wife of Zeus, adds a little decorum by screening her body from full view with a diaphous garment. At the right, Aphrodite holds her veil behind her, to ensure that nothing stands in the way of admiring her entire body.

In traditional versions of this story, the goddesses’ bodies are being exposed to Paris for his judgement. By removing Paris and attendants and putting the viewer in his position, von Stuck transforms this into the judgement of the viewer, making us think not only about the goddesses and their beauty, but also the consequences of our decision.

Von Stuck kept painting through the 1920s, when art had moved on to newer things, and his work was almost ignored. Two of his late paintings are particularly striking: the first, Wind and Wave (c 1927), is I think one of his finest. Another vibrant and uncluttered scene, it shows a winged figure who is probably one of the Winds (Anemoi or Venti), blowing over the body of a sea nymph (Oceanid or Nereid). As in classical painting, von Stuck shows streamlines being blown from the zephyr’s mouth.

This work may be thoroughly mythological, but it also has a meaningful physical interpretation, in showing ‘how’ the wind generates the waves of the sea.

The last of von Stuck’s paintings for which I have a usable image is his depiction of the long-popular story of Judith and Holofernes (1927); I have previously looked at the story in detail, with a wide range of paintings.

Taken from the book of Judith, Holofernes was one of Nebuchadnezzar’s generals, sent to take vengeance on the Hebrew people. Judith was a beautiful widow, who volunteered to help the Hebrew cause by ‘deadling with’ him. She seduced him, got him drunk, then beheaded him. She brought his severed head back to the Hebrews, who were then able to defeat Holofernes’ army.

The great paintings of the past showed various scenes, from the seduction, preparation for the decapitation, the killing itself, or Judith handling the head. Von Stuck chose Judith preparing to swing the heavy sword, with Holofernes lying on the bed in a drunken stupor. The simplicity of the scene results in a powerful image, heightened by the same red patches that he used behind Sisyphus.

By the time of his death, his art had already been largely forgotten. Unfortunately, he was also Hitler’s favourite artist from his childhood on, which did not help his reputation in the years after the Second World War. It was not until the 1960s that interest in his work was rekindled, and the Villa Stuck opened to the public in 1968. He surely deserves recognition as an original and very talented painter, who created some superb narrative and mythological works.