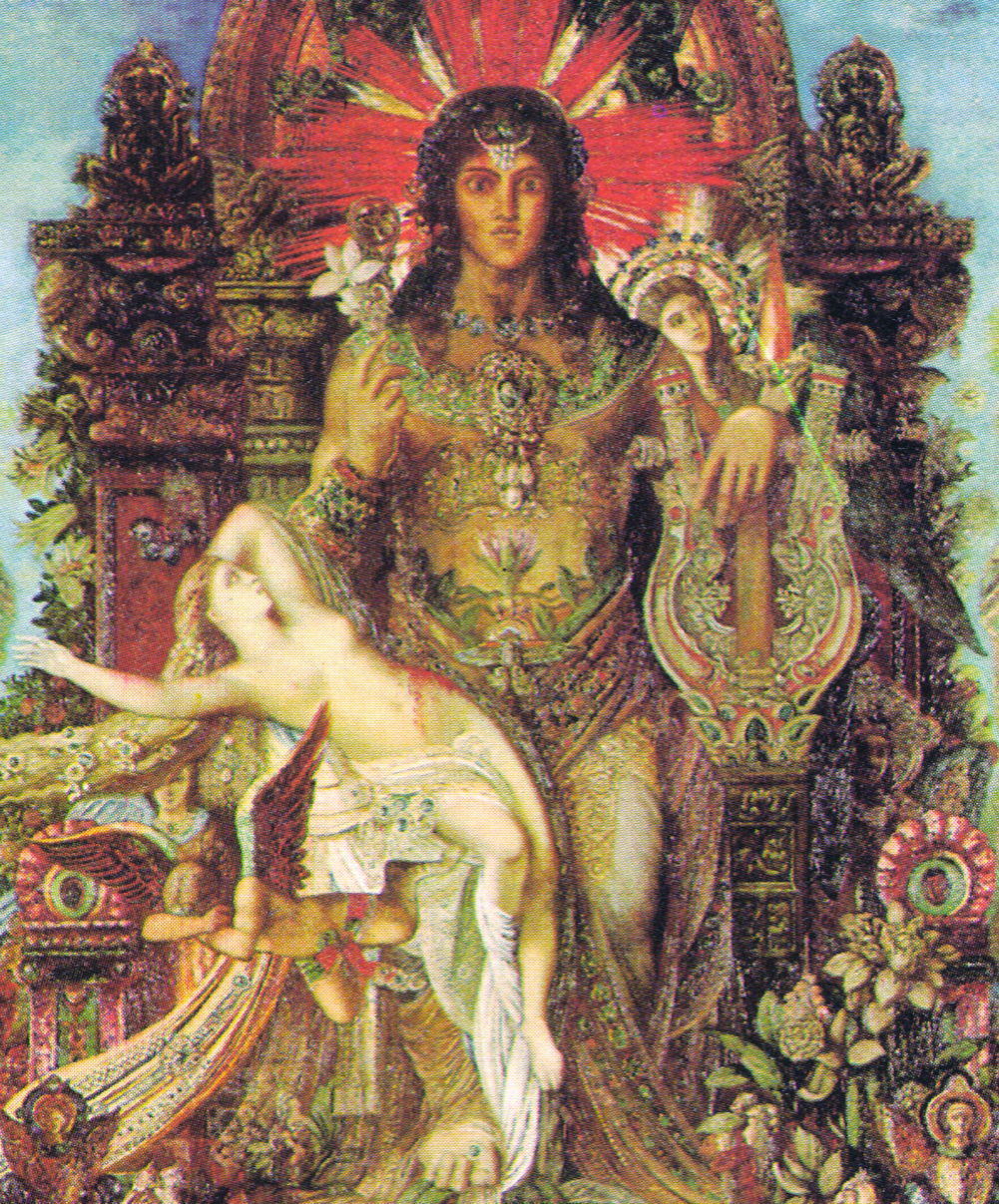 Gustave Moreau started work on his last major painting by 1889, and seems to have concentrated on it most in 1894-95. The story at the heart of it is one of the strangest in classical myth, and has not been a particularly popular narrative for paintings. It is drawn, as so many are, from Ovid’s Metamorphoses, Book 3.

Jupiter was the king of the gods according to classical Roman mythology, and the chief deity of the Roman state in classical times. Notoriously promiscuous according to myth, his wife Juno was forever having to deal with his adulterous wanderings. One day he took a fancy to the human Semele, a priestess of Jupiter, apparently when she was swimming in a river to cleanse herself of sacrificial blood. As a result of this, Semele became pregnant.

When Juno discovered this, she disguised herself as an old crone and befriended Semele to discover the whole truth, and to sow doubt in Semele’s mind. When she next saw her lover, Semele asked him to grant her a wish. He inevitably agreed, and she asked him to reveal himself in his full glory, so as to prove his divinity.

Jupiter realised that this would put Semele at risk, as being the god of the sky and thunderstorms, she would almost certainly be killed by his divine power. But she insisted, so he gathered his weakest thunderbolts and smallest storms, and revealed himself. Unfortunately Semele was then consumed in flames from Jupiter’s lighting, and died. He rescued the unborn baby, and continued the pregnancy by sewing it into his thigh. Months later, the baby was born, and became Bacchus, who rescued Semele from the underworld, and she was installed as a goddess on Mount Olympus.

Moreau seems to have worked first on an oil painting showing just Jupiter and Semele (1889-95). This contains a curious composite of the story, in which Semele has not yet been harmed by thunderbolts, but the foetal Bacchus appears to be resting against her, and Jupiter has assumed his divine form. At the foot of the painting is Jupiter’s attribute of an eagle.

That composition then formed the centre of his large masterpiece, also titled Jupiter and Semele (1895). Jupiter now sits on a massive throne, with Semele draped over his right thigh. All around them is phantasmagoric detail, drawn from many different myths and cultures, which can be seen better in the following views of details.

Jupiter rests his left forearm on Apollo’s lyre. His right hand holds a lotus flower, and his body or clothing is extensively decorated with further floral and botanical images. He looks, eyes wide open, straight ahead. Behind his left shoulder is a woman deity, perhaps his wife Juno.

Semele is statuesque, her arms cast back in shock. Her left side is covered in blood, presumably from where the foetus has been extracted. Her hair flows off in a long, thick tress, decorated like a peacock’s feathers. Below her is a winged Cupid, its face buried in its forearms, in grief at Semele’s imminent doom.

At the lower left of the painting are two prominent figures: a standing winged angel or deity whose identity is obscure, and a seated woman, who is resting her chin in her right hand. She could, by her modest blue robes, be the Virgin Mary, but her left hand holds a very long sword which is covered with blood.

There are many other smaller figures, putti, and other embellishments scattered around.

At the lower right of the painting are three prominent figures: a bearded man who is covered with flowers and fruit and has small horns on his head, a seated woman who appears to have come from mediaeval legend but is wearing a crown of thorns, and another winged angel at the right edge. The male has a goat’s leg to the left, indicating that he is Pan, half human and half goat – according to Moreau’s notes the ‘symbol of the earth’. The black wings behind him belong to a large bird, probably an eagle, Jupiter’s attribute.

The seated woman is harder to interpret. The crown of thorns would suggest that the figure is actually Jesus Christ, but he would have a prominent halo and would not have long, golden tresses of hair. She is also holding a large white lily in her left hand.

Below them is the world of Hecate, ‘the sombre army of the monsters of Erebus’.

Moreau has placed a dazzling array of other images from many different cultures and beliefs at the left side of Jupiter’s throne, some of which can be made out in this detail.

There are even more on the right, with many faces shown in halos, flowers, and more.

In the autumn of 1896, Moreau’s health started to decline markedly. Although he continued to teach for over a year, until early in 1898, his painting slowed, and from 1897 he worked less frequently, and with the aid of his students. He drew up more detailed plans for the museum, for after his death, ensuring that it was left to an appropriate custodian in his will.

Moreau now had advanced cancer of the stomach, and died of that on 18 April 1898, at his home. His museum was officially inaugurated in 1903, and remains open today.