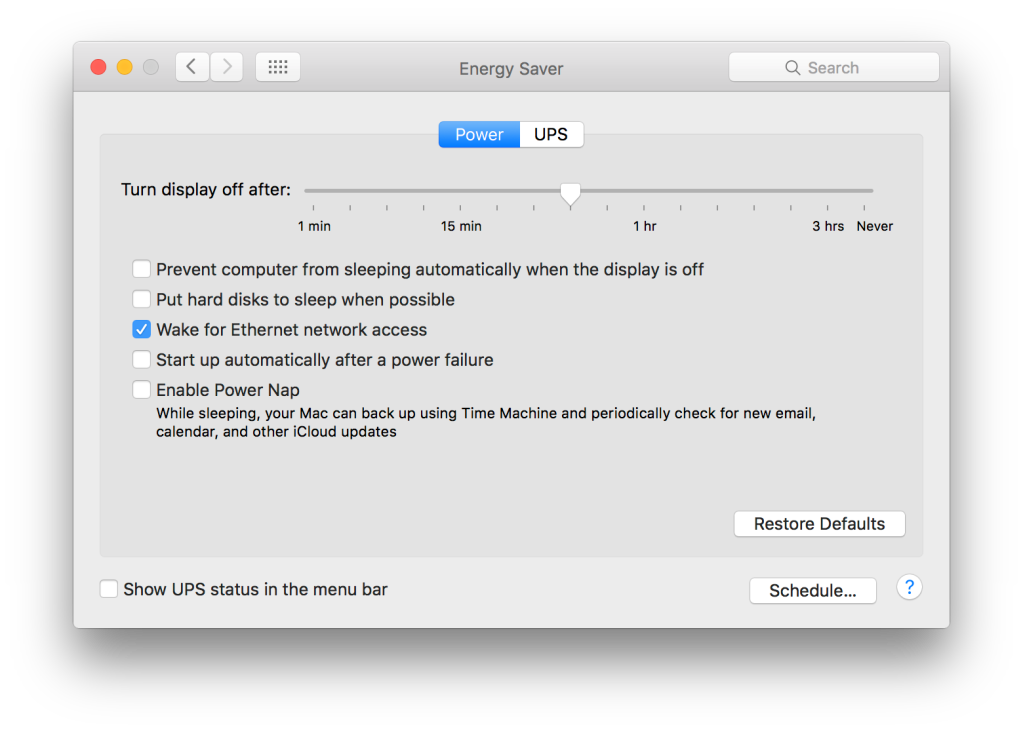 The Energy Saver pane in System Preferences does not give you full access to all the capabilities of your Mac. Even desktop models have more than a dozen different controls to determine their sleep and related behaviours. The best way to gain full access, whether you’re trying to fix your Mac’s aberrant sleeping habits, or tweak something crucial, is to use pmset at the command line.

There is an additional system-wide power setting, DestroyFVKeyOnStandby, which determines whether the FileVault key is destroyed when your Mac goes into standy or hibernate mode. Normally that is set to 0, which preserves the key, but if you want to secure your encrypted hard disk, you will probably want to set it to 1: then waking it from hibernation will require the user to enter the FileVault passphrase, and if they fail to do so, they cannot try to recover the key from memory.

The meaning of these settings is generally obvious:

There are a couple of other settings which you can view using man pmset.

If you have a supported uninterruptible power supply (UPS) connected, you can check its settings using
pmset -g ups
which will typically return something like
UPS settings:
haltlevel off 0
haltafter on 2
haltremain off 0

The three settings here are:

So according to my settings above, when my Mac is running off its UPS battery, it will start making an emergency shutdown after two minutes on that supply. These match the settings you can make in the Energy Saver pane.

Even though you might have your laptop connected to a UPS, portable Macs do not use UPS emergency shutdown settings; in the event of power outage, including the UPS shutting down during a prolonged mains failure, laptops use their internal batteries and follow their own sleep and shutdown settings instead.

You can also schedule automated power on, shutdown, wake, and sleep events, which are detailed in man pmset.

Using pmset to change Power Management settings requires you to have elevated privileges, so must be prefaced by sudo. For example, to set a Mac so that it destroys its FileVault key when going to standy/hibernation mode, you should enter
sudo pmset -a DestroyFVKeyOnStandby 1
then authenticate with your admin password.

When setting values, you will normally need to specify which group of settings are to be affected. This is determined by options:

To set the time before a Mac goes to sleep to 20 minutes, you can therefore use the commands

If you get the settings into a mess and don’t know what to do,
sudo pmset restoredefaults
should work just like the button to restore defaults in Energy Saver (which you could use instead), and sets everything back to the default settings for that model.

To set a desktop Mac to start emergency shutdown when it has been running on UPS power for 5 minutes, you would use
sudo pmset -u haltafter 5

There are a couple of other useful features in pmset:

caffeinate
can create an ‘assertion’ in OS X / macOS which will prevent sleeping of a particular system. It is fully documented by man caffeinate

They are also shown in the Power item in System Information (About This Mac, then click on System Report).

You can use pmset to diagnose odd sleep behaviour in laptops. For example, if your MacBook Pro seems to keep going to sleep suddenly when it has less than 50% of its battery remaining, open a window in Terminal and type
pmset -g pslog

Then when the problem next occurs, wake your Mac and look for sudden falls in the indicated power remaining, such as a drop from 30% to almost nothing. These are typical of an ageing battery which needs to be replaced.