You can tell how a new operating system release went by its attendant coverage in the news media. Windows 10 only needed its Anniversary Update to be plastered all over the BBC and almost everywhere else. iOS 10 escaped fairly lightly, generally with brief mention of the initial glitch, which Apple quickly fixed with 10.0.1.

macOS Sierra has barely got a mention. Search the BBC’s website, for example, and the closest hits are about Sierra Leone.

Looked at in terms of surface features, you might wonder. Siri, Universal Clipboard, iCloud Drive and Optimised Storage, and some fancy features in Photos hardly merit a whole new version, the step from 10.11 to 10.12.

Internally, though, Sierra seems very different. To put it bluntly El Capitan was rapidly becoming an embarrassing disaster. Although many users found it stable and reliable, a rising number were suffering kernel panics and other severe problems. And these seemed most common on Apple’s most recent, and often current, hardware. We never really got to the bottom of those problems, but they were clearly low down, either in the kernel itself or kernel extensions such as Bluetooth and graphics drivers.

El Capitan was also a system beseiged by malware. Admittedly not on the scale of Windows in the past, and most unlikely to trouble the average Mac user, the threat has definitely changed over the last few months. El Capitan’s built-in protection has too many chinks in its armour to be relied upon, and it was only a matter of time before a major hit occurred.

Whether Apple has succeeded in addressing these vital internal issues, only time will tell. What I do know already is that Sierra’s kernel behaves very differently under stress. It seems determined to keep running, even if it has to yield much of the hardware to do so.

In co-operative multitasking, you always get processes which fail to play the game properly, and hog the processor for long periods. When that happened, the busy cursor appeared, the clock usually stopped (or ticked exceedingly slowly), and everything else ground to a halt. That is exactly what I saw happen in Sierra: the processes involved in making a Time Machine backup hogged the four cores in my iMac’s CPU (or perhaps some critically-linked hardware), and stopped the clock and other active processes from running for more than a minute at a time.

Despite this hammering, I left my Mac alone, and the kernel worked through the crisis. The backup completed, and suddenly everything returned to normal. Maybe in similar circumstance El Capitan’s kernel would simply have panicked, my Mac frozen, and eventually automatically restarted.

It is also interesting that one troubled area in the recent past, Bluetooth, was less affected in that incident, and I have yet to see any spontaneous Bluetooth disconnections.

Whatever was going on there, this makes it clear that the heart of macOS Sierra is very different from that of El Capitan. And that certainly justifies it being dubbed a major release – particularly if it fixes the troubles that were making El Capitan so irksome for many.

There are, though, two areas in which Sierra is clearly in need of rapid improvement: its secretive use of iCloud, and logging.

Apple’s human interface guidelines have, over many years, been exemplary, even if they had more recently ignored some important design lessons of the past. By and large, macOS Sierra is a forgiving operating system to run: you can still do many things which are destructive and cannot readily be reversed, but in general the user remains in control, and gets fair warning. 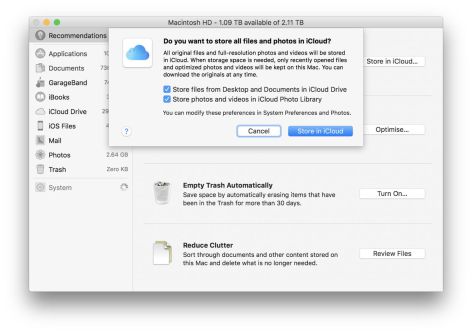 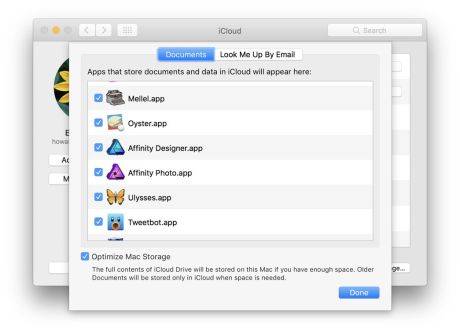 The glaring exception to this is with optimised or managed storage, or iCloud Drive options. For a start, they are offered in two different locations, the About This Mac dialog and the iCloud pane, but appear quite different in each. The options offered are opaque, and can easily lure the innocent into handing control over their documents to systems whose behaviour is remarkably vague.

It is easy to suggest that Apple is just trying to promote iCloud, and lure more users to pay for ever-larger amounts of storage. I don’t think that is necessarily the case: it is rather Apple’s persistent paternalism, patting us on the head like an affluent uncle, assuring us that it’s all fine, and not to worry.

And if things do get into a bit of a muddle, we can always contact Apple Support, who will gently guide us to a happy resolution. That is not how I have ever run my Macs, and not how I intend to. We need proper options, controls, and tools to allow us to sort our problems out, like grown-ups.

That brings me to the one horror story in Sierra: its logs, or rather, lack of logs. I have previously whinged and whined about how El Capitan’s logs had become so full of irrelevant chatter that they were impossible to clean up (a clean log being the sign of a well-running operating system), and decreasingly useful.

What we start the Sierra cycle with – whatever its promises for the future might be – is a step back before even the first public beta-release of OS X. The Console app itself has more features in a smaller footprint, but post mortem diagnosis is currently almost impossible. Read any of the articles here about how to use logs to diagnose startup problems, crash-on-wake issues, and many others, and you will find that Sierra’s logs simply don’t capture the data on which you must rely.

I am not only shocked, but surprised that Sierra’s developers were able to live with this. In operating system development, such tools are normally completed early, as those carrying out the rest of the work are dependent on them.

This again smacks of a paternalistic approach. If we lack the tools to resolve our problems, then we’ll just have to take them to Apple Support, or a Genius Bar, where they can sort us out. Only I’m afraid that they don’t: all too often, Apple blames a third party developer, who is either disinterested, or as baffled as we are. Problems with Photoshop? Well, you’ll have to contact Adobe and see what they can do. Meanwhile we’re left unable to get on with our work, as a bout of blamestorming goes on between support desks.

It is not so long ago that, when asked why Adobe’s Creative Studio apps did not yet support a recent major release of OS X, Adobe blamed Apple for releasing it out of sync with Adobe’s revision cycle. Now that CS has been replaced by the rolling updates of CC, there can be no such excuses. While Adobe Photoshop and Lightroom do now run on Sierra, other apps in the CC bundle are not approved for Sierra, and there has been no announcement as to when they might be so approved.

So if you need to use Adobe CC apps other than Photoshop or Lightroom, you are unable to upgrade to Sierra, and have no idea when you might be able to. It is strange how Adobe has been able to assess and update those two apps to be compatible with Sierra, but seems in no hurry to do that for the likes of InDesign or Premiere Pro. It has not responded to suggestions by users that CC subscribers should not be charged subscriptions for the period between the release of Sierra and Adobe CC becoming completely compatible with and approved for use with Sierra. I think that is the least that it should do.