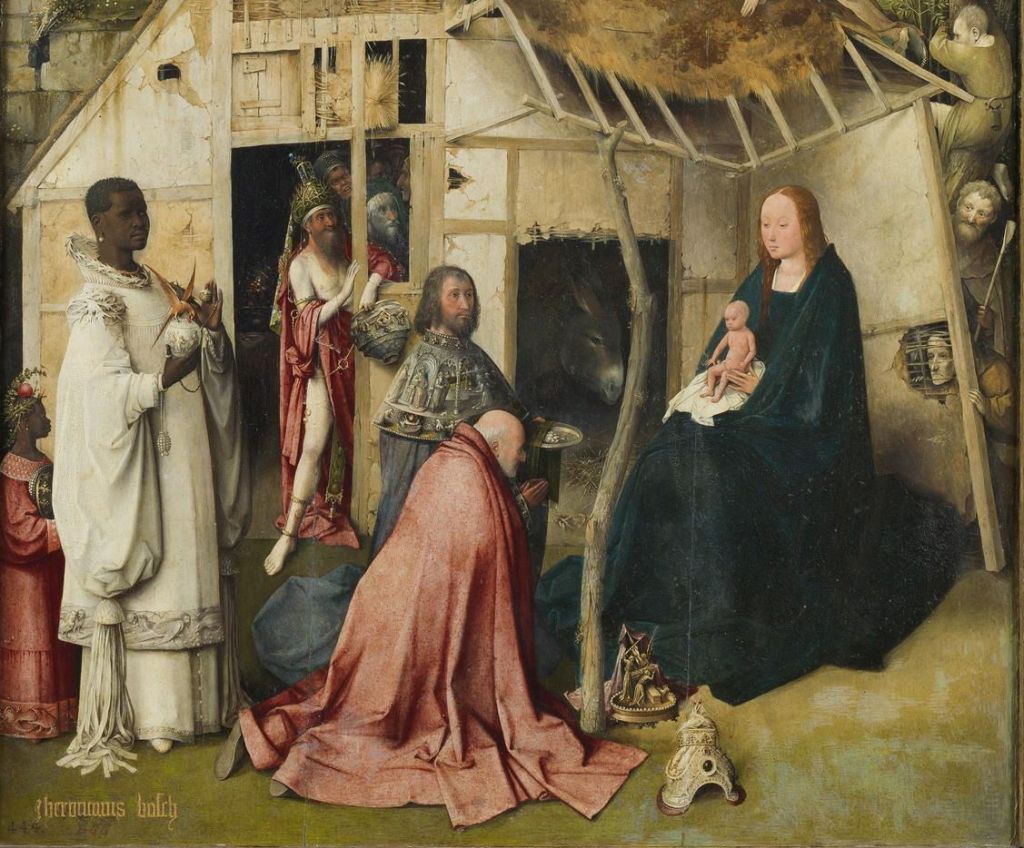 His second surviving painting of this popular motif restages it in the local countryside, which grows ever more sinister. Probably his oldest surviving triptych, it is the greatest of his early works, and must have established his reputation.

This is Bosch’s second known painting depicting the adoration of the infant Christ by three wise men. His earlier single-panel painting, now in The Metropolitan Museum of Art, New York, is detailed in this previous article.

The exterior painting is based on a brown grisaille, and shows the Mass of Saint Gregory. Unusually it is placed inside a painted false frame just inside the physical frame.

Pope Gregory the Great (c 540-604) is seen officiating at the altar. Two men, one older and the other younger, are painted in full colour. They have been identified as the donor’s father and son. Above and behind the altar is the figure of the resurrected Christ, still showing the marks of crucifixion on his side and hands, and wearing his crown of thorns.

Around Christ is a border of angels, and around those an arched area which contains seven scenes of the passion of Christ. These are read from the bottom left (Christ praying in Gethsemane), bottom right (the arrest), through the mid-left and mid-right, to the crucifixion at the top. Outside those narrative scenes are some more unconventional elements, including a winged devil flying off with Judas’s pale body impaled on a long lance.

When opened, the almost colourless grisaille is replaced by the rich greens, browns, and reds of the Adoration scene within.

Overall, the interior is rich in colour, detail, and activity. Its three panels form a continuous view of the local Brabant countryside, with its low rolling hills, and a city in the distance: this may be based on Antwerp (the donor’s city), or possibly ‘s-Hertogenbosch. If the latter, in common with Bosch’s Calvary with Donor, this could be a view from the sandy south, with the river at the right.

The Adoration scene fills the foreground of the central panel, while the left and right panels are devoted to the donor and his wife.

In the foreground is what appears to be a generally conventional if meticulously-detailed depiction of the adoration of the Magi. The Virgin Mary is sat under the tumbledown eaves beside a small cattleshed or stable known in this area as hoekboerderij. The infant Christ is seated on her lap, steadied by her left hand.

The senior of the Magi, an elderly man, has removed his crown, which is to the right on the ground, and prays to the mother and child on his knees. His gift is an elaborate gold table decoration showing Abraham about to sacrifice his son, Isaac. Behind him a second has also removed his headgear and holds his gift of myrrh on a silver platter. To the left is the third, a bare-headed African king wearing immaculate white robes, and bearing his gift of frankincense inside a sphere, on top of which is a phoenix bird; he has a child attendant behind him.

More unusually, a fourth king, identified as an anti-Christ, is inside the shed, wearing an ornate crown, and clutching a helmet with his left hand. His appearance is bizarre because his face and neck are sunburnt, but the rest of his skin is deathly pale. He is partly undressed, and has an old wound on his right lower leg. Several other figures are seen behind this fourth king.

An ass is visible through an opening in the wall of the shed, between the Virgin and the Magi, but the traditional ox which would accompany it is not apparent.

To the right and above this traditional scene are more peculiar events. A group of shepherds are engaged in climbing a tree behind and to the right of the shed. Two, a man and a woman clutching a set of bagpipes, are leaning over the thatched roof to view the scene below, and three others are below them. One of Bosch’s signature owls is just visible too: at the same level as the face of the upper person on the roof, just by the break in the wooden frame of the gable end of the shed.

The background to this panel shows low, rolling hills with small woods and open grassland. In the middle distance is a windmill, behind which are unusual turreted buildings, a moat or river, and a city either based on Antwerp or ‘s-Hertogenbosch. This countryside contains sporadic people, and no less than three small armies, two of which appear to be approaching one another, from the left and right sides of this central panel; their headgear suggests that they come from outside this part of Europe. The third group can be seen back towards the foot of the windmill.

In the sky above, although it is full daylight, the guiding star still burns brightly.

The left panel – which is the heraldic right side, thus the senior – shows in the foreground Saint Peter presenting the donor, as his name saint. The Saint is recognised by his standard attribute of the keys to heaven, his aged appearance, and red robes, and is similar to the version in Calvary with Donor. The donor wears black robes and is kneeling in supplication; he has been identified as the wealthy Antwerp burgher Peeter Scheyfve, a very successful weaver, whose arms are shown at the left.

Behind them Joseph sits on an upturned basket, drying cloths in front of a small open fire, in the shell remains of a building. In the middle distance beyond, a small group of figures is seen on a field. In the far distance is a substantial country residence, with a distinctive spire.

The right panel shows Saint Agnes presenting the supplicant wife of the donor likewise. The donor’s wife’s name saint is recognisable by her attributes of books and red robes. The donor’s wife wears a long black dress with a long white headdress, and is kneeling. She has been identified as Agneese de Gramme, and her arms are shown to the right.

Behind them is a lamb, very similar to that seen in Bosch’s Saint John the Baptist detailed here.

Behind the lamb are the shattered remains of small trees, and low earth ramparts. Beyond them is a path running in an arc through a grassy field. Near the path, a man is being savaged by a wolf. In the far distance, the land drops down to a broad river, perhaps an estuary. There is another city on a promontory or island in that body of water, and further large buildings in the far distance, on the horizon.

Bosch’s other painting of this popular Christian scene, which we must presume was completed some years earlier, is quite different in many respects. However, it too relocated the New Testament story to northern Europe, although not perhaps as specifically as this does.

The later painting of the same scene by Pieter Bruegel the Elder in about 1564 has some common features, the tumbledown thatched cattleshed in particular. But where Bosch has developed a detailed landscape setting, Bruegel packs in a crowd of people. Both paintings diverge significantly from the most common approach, which concentrates on the small group of Virgin, Christ, and Magi.

In that sense, the composition of this later Adoration is a development of his earlier painting, with the surprising and unusual inclusion of an anti-Christ too.

Before considering the fine detail of the interior paintings, it is worth considering the much plainer, but equally detailed, exterior. Bosch painted another Passion cycle, as the reverse to his Saint John on Patmos, which employs complex narrative techniques to great effect.

The Passion shown on the exterior of this triptych is just as sophisticated in its narrative, using multi-frame narrative in the lower four scenes, told bottom to top, and left to right, and a similar multiplex narrative at the top. Although there are differences in the individual scenes, this is strong evidence that these two paintings originated from the same hand. (Another notable link, to Saint John the Baptist, is of course the lamb on the right panel.)

Its directional sense may appear peculiar, but was necessary if he was to incorporate a similar multiplex narrative centred on the crucifixion at the top. If his Passion Scenes is as unusual as I suspect, the scenes shown here make two of a kind.

In addition to his somewhat sinister events, such as the man being savaged by a wolf, Bosch incorporates some gentle humour in the shepherds, and a sense of great forboding in the three armies in the background. At the time, Brabant was a haven of peaceful prosperity, at least from about 1210 to the start of the Reformation from 1560 onwards.

Given the foreign headgear shown, it is more likely that these armies are symbolic of the forces of good and evil, perhaps harking back to sterotypes from the Crusades even.

The Adoration itself is rich in details which add many subtle nuances to the basic story in the painting. These are considered in depth in Ilsink et al. and other full accounts of this masterpiece.

This painting has not apparently been the subject of any dispute as to it being an authentic work by Bosch’s hand. It remains in remarkably good condition, with Bosch’s signature very clear. There is no evidence of any significant alterations made after its completion, although Ilsink et al. trace many changes which took place during its painting.