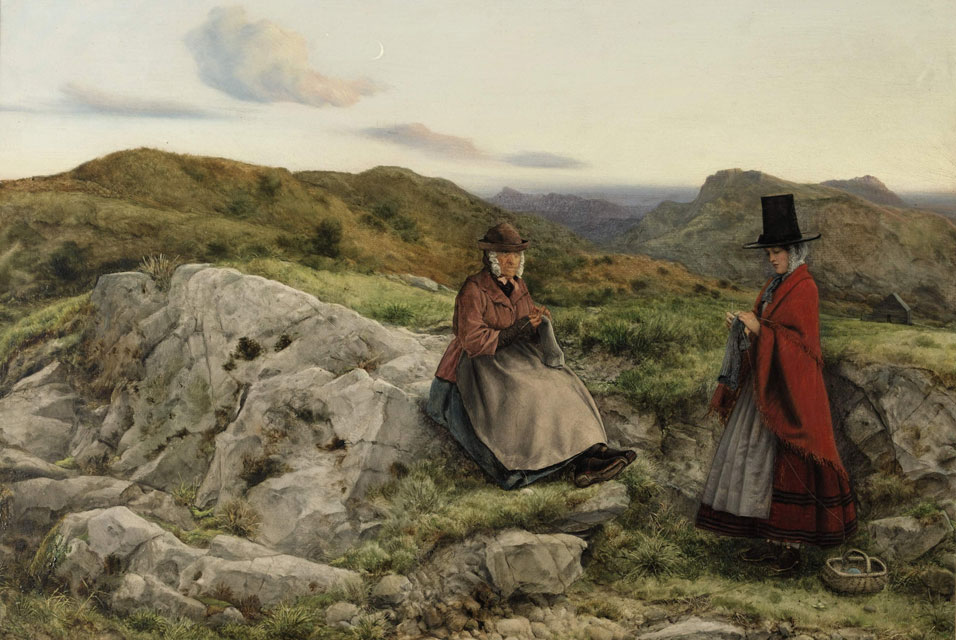 William Dyce (1806–1864) was another very well-trained Victorian British painter. Born in Aberdeen, he was trained in the Royal Academy Schools in London, and spent about two years in Rome between 1825 and 1828. When he returned to the UK, he set up as a portraitist, but started painting religious narrative works as well.

He had a long and significant career in art education, starting with the School of Design in Edinburgh. He was then invited to run the newly-established Government School of Design in London, which later became the Royal College of Art. In 1838 he was commissioned to enquire into the future of art and design education, and formulated what became known as the South Kensington System, which was the dominant model for art education for the remainder of the nineteenth century.

This quite popular story for depiction in paintings is drawn from the Old Testament, the First book of Kings, chapter 3.

Solomon was known as a just and very wise king over the Israelites. Like many kings, he sat in judgement over disputes, assuming the role of the ultimate court of appeal. One day, two young women who lived in the same house came to him seeking his judgement. Both had recently given birth to sons, but one of the sons had died, leaving the mothers in dispute over the surviving infant.

After some thought, Solomon called for a sword, and declared that the only fair solution was to cut the live child in two, so that each mother could receive half of him. The true mother then implored Solomon to give the whole baby to the other mother if that would spare his life, but the liar called on Solomon to go ahead and divide the infant as he had proposed. This could be the first description of what is now known as a classic problem in Game Theory.

Dyce’s composition of what is otherwise a classical narrative painting is unusual: Poussin and most others before him elected for symmetric views directly at Solomon on his throne, with the mothers on either side. Dyce chooses a side-on view which results in a linear sequence of figures, from a very young (rather than visibly sagacious) king high on his throne at the left, and putting the two mothers and their babies in the centre of the painting. This proves very effective.

Otherwise he follows Alberti, with good facial expressions and abundant body language. The view of the sky in the background appears sketchy if not incomplete, though.

This story is one of many embedded in Dante Alighieri’s Divine Comedy, in its first part Inferno (Hell). Paolo and Francesca da Rimini were in the second circle of hell for their sins of lust: she committed adultery with her husband’s brother, Paolo Malatesta. Her husband Giovanni (or Gian Cotto) then killed them both.

This is more conventionally depicted when they are both in hell, for example Doré’s Paolo and Francesca da Rimini (1863).

Dyce’s selection of scene for his painting is strange, in showing the adulterous couple engaged in apparently quite modest lovemaking, fully clad, under a crescent moon. However, an ominous hand belonging to someone else – presumably Francesca’s husband – is seen at the extreme left. There is also evidence of a more complete figure of Giovanni having been at that left edge, now presumably painted over. Without that, there are no real clues as to the narrative, nor to its imminent climax.

Neptune Resigning to Britannia the Empire of the Sea (1847)

In 1845, Dyce was invited to paint frescos for the Royal Family, and he travelled to Italy to learn technique. On his return in 1847, he painted this curious composition in Queen Victoria and Prince Albert’s new and luxurious holiday palace of Osborne House, at East Cowes on the Isle of Wight (just a few miles from where I live).

Neptune stands astride his three white seahorses (with fish tails!), holding their reins in his right hand, and passing his crown with the left. The crown is just about to be transferred by Mercury (with wings on his cap) to the gold-covered figure of Britannia, who holds a ceremonial silver trident in her right hand.

Neptune is supported by his entourage in the sea, including the statutory brace of nudes and conch-blowers. At the right, Britannia’s entourage is more serious in intent, and includes the lion of England, and figures representing industry, trade, and navigation.

The narrative is novel, and a tribute to his monarch, to denote the assumption of power over the seas of the world by Britannia, symbolising the Queen herself. It is undiluted tribute and flattery, of course.

While he was working on this fresco, Dyce appears to have taken a little time off to travel from Osborne, in the north, to the south-east, to paint this fine watercolour sketch from Shanklin looking across Sandown Bay to the distant red and white Culver Cliffs, forming the eastern promontory of the island.

I show this not because I would suggest that there is any narrative in this lovely painting, but for its relevance to his other work. For in addition to painting portraits and narrative works, Dyce was an accomplished landscape artist, with a predilection for coastal scenes featuring cliffs. Osborne House has its own private beach, and a few minutes away, in Cowes, there were ample opportunities for marine views. Yet Dyce chose to travel more than ten miles over quite rough tracks to what was then an undeveloped bay to paint this view.

Piety: The Knights of the Round Table about to Depart in Quest of the Holy Grail (1849)

Dyce also engaged in the popular Victorian sub-genre of Arthurian legend. This watercolour uses the hatching more commonly found in illustration and prints, and was the study for a fresco for the Queen’s Robing Room in the Palace of Westminster (Houses of Parliament).

It shows a melée of knights of the Round Table paying tribute to King Arthur and Queen Guinevere (at the right), as those knights prepare to depart on their quest for the Holy Grail, the legendary chalice used by Christ at the Last Supper, before his crucifixion (or possibly a cup used by Joseph of Arimathea to collect Christ’s blood). It is perhaps the Arthurian equivalent of Frith’s Derby Day.

Unusually, Dyce tried to couple this series of Arthurian frescos with the seven Christian virtues. He completed those for Mercy, Hospitality, Generosity, Piety, and Courtesy, but not for Courage or Fidelity. The links between the narratives chosen and the corresponding virtue are not particularly strong.

The meeting and marriage of Jacob and Rachel is described in the Old Testament, in Genesis chapter 29. Laban, Jacob’s uncle, had two daughters, Leah the older, and Rachel. Jacob was sent to Laban’s town to avoid being killed by Esau, and to find himself a wife. One day he was by the well, where Rachel was about to water Laban’s sheep, and decided to marry her; Laban required him to work for him for seven years to take Rachel as his wife. However, on the wedding night, Rachel’s older sister was substituted by Laban, who argued that it was customary for the older daughter to be given first in marriage, and offered to give Rachel to Jacob too if he worked another seven years for him. That he did.

Dyce follows convention in his portrayal of this first meeting. Rachel is shown as being shy and coy, her eyes and head downcast. Jacob stares intently at her, clasping her right hand to his chest while his left hand holds the nape of her neck.

Shakespeare’s tragedy of King Lear, written in 1605-6, was based on the legend of a pre-Roman British king Leir, and shows gradual descent into madness of old age. As in several of his other plays, the role of Fool gives Shakespeare great scope for mockery, and to give deeper insight into Lear himself.

This particular scene occurs after Lear rages at Regan for putting his messenger in the stocks. Lear rushes out into a storm, accompanied by his Fool, where he rants against his ungrateful daughters, Regan and Goneril.

King Lear is shown having a good rant into the wind of the storm, his body language profuse. Resting with his head propped on the heels of his hands, the Fool also looks up to the heavens. This is another example of Dyce’s classic use of narrative techniques.

Generally acclaimed as Dyce’s finest painting, this shows Pegwell Bay on the Kent coast, during a family holiday visit: a coastal scene with many similarities to that of his earlier Culver Cliff, but worked up into a large finished oil painting for exhibition at the Royal Academy (where it was shown in 1860).

Dominating the view are chalk cliffs, their strata and fine texture rendered in detail. The foreshore in front of them is relatively flat, and consists of rock ledges with intervening sand. The tide is well out, probably close to full ebb. The sun is setting and, although not visible in this image (it is high in the centre), the sky also shows Donati’s comet, which is not due to return until 3811.

Various figures are scattered across the beach. At the foot of the cliffs is a small group of donkeys, a common feature of seaside resorts, and some sheep and their shepherd. Three heavily-dressed women and a small boy are in the foreground. One woman is bent double, inspecting the ground intently by a chalk rib. The small boy, presumably Dyce’s own son, holds a beach spade, but appears to be staring emptily into the distance.

There is no obvious narrative in this painting, which by its title and content might appear to be a straightforward coastal view. Yet it is generally held that there are deep readings: Cregan-Reid, for example, considers that it is about time – astronomical time of the comet, deep geological time of the cliffs and fossils, the more momentary existence of the people, and the regular cycles of tides and sun.

I am afraid that I am not entirely convinced.

If Dyce’s view of Pegwell Bay lacks incongruities which might support a deeper reading, this slightly later painting goes out of its way to be odd.

In the autumn of 1860, Dyce stayed in the Conwy Valley for six weeks, where he sketched and painted avidly. After his return to London, he painted this in oils, showing the rough and rugged scenery above the valley, a rock outcrop filling much of the left half of the painting. In its centre is an old woman, and to the right a young one, each dressed in traditional clothes, and knitting. A sliver of a crescent moon is visible low in the sky.

The younger woman wears a formal ensemble which had recently been revived and designated the ‘Welsh national costume’, as might be worn for Eisteddfods and other special occasions. They are both knitting stockings from scavenged scraps of wool, an activity which might have been common earlier in the century and performed indoors at home. It had largely disappeared by 1860, and is a conspicuously incongruous activity for such an outdoor location.

If there is one of Dyce’s paintings which shouts out that it has a deeper reading, it is this. It is easy to postulate that this too is about time: the contrasting ages of the women and their ‘historic’ costume, knitting (as with Leighton’s Winding the Skein) being an activity used to pass the time usefully, the geology of the rock outcrop, and the moon. But is that Dyce’s intent?

William Dyce was an eloquent if rather conventional narrative artist, when tackling traditional stories. The difficulties in reading his paintings, though, come with works such as his view of Pegwell Bay, and above all his Welsh landscape. Are they about time? Without a recent catalogue raisonné and appropriate studies, it is very hard to know.