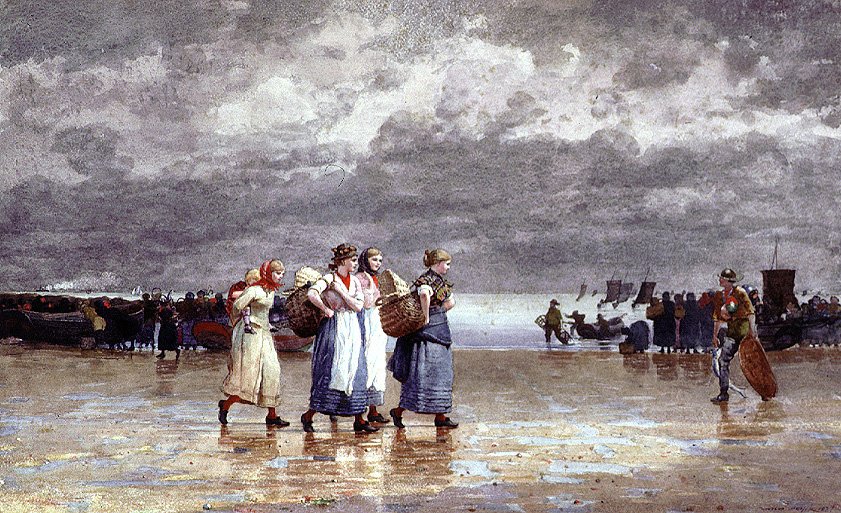 This article rounds off my series looking at Winslow Homer’s paintings from Cullercoats, by setting them into a narrative context.

Many individual paintings have their own, small narratives. What I want to do here is, using some of the best of his work from 1881-2, to see how they assemble into a larger narrative about the life of fishlasses, fishwives, and the fishermen of Cullercoats.

Like many fishing communities at that time, everything in the lives of individuals and the community as a whole was driven by the cycle of fishing activity. This cycle starts with the departure of the men and boys on board their boats, to go in search of a catch – an event which Homer does not seem to have painted.

With their menfolk away at sea, the women and girls returned to their maintenance tasks, of making and mending clothing, nets, and other fishing gear, and of caring for the other members of their families, who were too young or too old to go to sea.

Lighter work, such as preparing lines and tackle, was usually performed by the younger women. When the weather was fine they would sit outside in their yards putting bait onto lines, then coiling the lines carefully into the shallow wickerwork baskets from which they would be deployed.

Once the fishwives thought that the boats might return, they would post lookouts to scan the horizon for them. In fine weather they would take the whole family up on top of the low cliffs, and one would stand and act as lookout.

As they went about their work, wherever they were, they would look out to sea, watching for the boats to come in.

Whenever they had a moment, they would watch, waiting for the next stage in the cycle to begin.

When the weather was bad – in gales, rough seas, or fog – the watching became more tense. They knew that the risks to their menfolk were greater, and that the chances of losing a man overboard, injury, and death were increased.

They knew the violence of the sea, how it could drive large well-found vessels ashore. They feared the winter storms, with easterly gales which could bring shipwreck and disaster. The worse the weather, the more they watched, and the more anxious their watching.

Even when all the Cullercoats boats were safely stowed in harbour, they knew that their menfolk might have to take to the sea in the lifeboat, rowing out to rescue others in distress. They remembered the lifeboat which was lost with all hands, and watched, fearing for their men, and the risks that they took for others.

Once they could see the boats returning, they flocked down to receive them. As the first arrived they looked intently to see their own, poised ready with the fishbaskets, for when their boat comes in.

The whole family went down to greet the boats, transfer the fish to their baskets, and haul the catch back up to the village. There they prepared the fish for despatch to the fishmarket in North Shields, hoping to get good prices so that they could feed and clothe their families. Again, he does not appear to have painted the women processing the fish, nor the catch being despatched for sale.

Their menfolk brought the fishing gear back up, for the women to prepare once again for the start of the next cycle, when those men returned to sea to fish.

There were sometimes a few moments when they could sit up by the boats which were out of service, taking up some of the sunny spells. But always, through force of habit, they remained watching.

So, in eleven of Winslow Homer’s best watercolour paintings from his 19 months spent in and around Cullercoats, he has provided us with the very human and personal story of the fishlasses, fishwives, and fishermen of the community of Cullercoats, on the north-east coast of England, in the late 1800s.