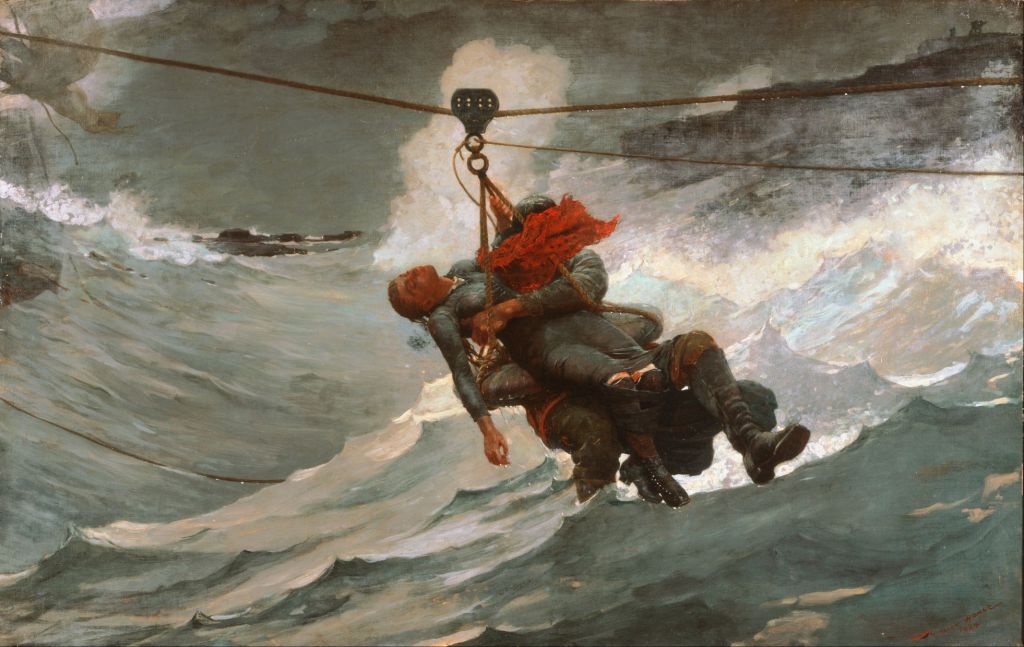 This short series has been looking at Winslow Homer’s paintings from Cullercoats. I have shown how he pictured the fishlasses and fishwives watching for the return of the boats, working ashore, and the bustling activity when their boats came in.

By all accounts, life in Cullercoats changed greatly during the summer, when itinerant musicians and street entertainers toured through the village, and miners from the nearby coalfields visited it as a beach resort. Despite being in the community for two complete summers, Homer showed not even a brief glimpse of that. Instead he concentrated on the fishing community, and its womenfolk in particular.

Every moment that these women and girls are pictured, they are active: here on the cliffs in the summer they are gathering yellow flowers, perhaps to sell to visitors.

Some accounts of Homer’s paintings dwell on the segregation of the sexes which appears in many of them. Apparently drawn further south down the coast from Cullercoats, his sketch Fishing off Scarborough (1882) shows two fishwives at sea with two men.

Although his production of sketches and watercolour paintings appears to have been quite intense and sustained, Homer also painted a few works in oils whilst at Cullercoats. His Hark! The Lark! (1882) was shown at the Royal Academy in London in 1882, but does not seem to have had much impact. It lacks the remarkable freshness and spontaneity of his watercolours, resembling the rustic Realism of Jean-François Millet, perhaps.

It raises the question, though, of how much he travelled away from Cullercoats during the 19 months in which he lived there. Some have claimed that he journeyed significantly further north, perhaps even to Scotland, and as far afield as Wales. In the absence of either paintings or documentary evidence, these appear unlikely.

His production during that time also changed considerably. As most of his sketches and paintings are signed and dated by year, I have looked at the dates attributed to them for the paintings which I have shown here. Twenty-four, almost three-quarters, are dated 1881, and only eight in 1882. The great majority of his paintings included in the references were also dated 1881. Does this mean that he painted fewer in 1882, that many of those painted that year have been lost or destroyed, or that private collectors have amassed his work from that year disproportionately?

Some have pondered Homer’s relationship with his models, although all the evidence is that it was entirely professional. Winslow Homer’s lifestyle was so upright and sober that several potential biographers apparently declined the opportunity to write books about him because of the difficulty they would have in retaining the reader’s interest.

One model, a redheaded girl of 15 years age at the time, has been identified as Maggie Jefferson (later marrying to become Mrs Maggie Storey, and having 17 children), who lived on Bank Top near Homer’s studio. She was often paid the shilling which he gave his models for a sitting. It was a lot of money to them in 1881, and made him a generous donor to the budgets of many Cullercoats families.

Looking through his many gorgeous paintings, there are other faces and figures who start to become familiar too. My own curiosity has been aroused over a young woman, probably slightly older than Maggie Jefferson, with more blonde hair, who is often seen wearing red stockings. The composite image below shows details of what may be the same model from the following paintings:

Winslow Homer was already making the shift from painting in opaque watercolour before he went to Cullercoats, and was adept at the techniques used by Turner and other masters to get the best from them. He had switched to Winsor & Newton’s paints on Whatman paper, considered to be the finest of the day. His studies of Turner’s and other work in London, and his understanding of colour perception, helped him create a succession of superb paintings, with remarkable spontaneity and richness of gesture, masterful composition and use of colour. Individually many are among the greatest watercolours of all time, and viewed as a group they must be almost unique.

He sent paintings home in advance, always mindful of the need to make his market. Initial reception in the US was lukewarm at best. A few critics were positive, but most were dismissive: Mariana Griswold Van Rensselaer is often quoted as stating that they were “neither individual nor attractive.”

Superficially, Homer’s response was to turn back and paint more American themes and scenes. In doing so, he transferred what he had learned at Cullercoats, and often revisited its people and their lives.

Early success came with The Life Line (1884), a work in oils which was ostensibly inspired by the rescue of a young woman from shipwreck off Atlantic City, New Jersey, in the summer of 1883. But look carefully at that provocative, almost erotically-charged woman, and is she not one of the fishlasses from Cullercoats, complete with flashes of red in her shawl and legs? This sold almost immediately it went on show, for $2,500, and marked the start of Homer’s commercial success.

There followed a series from the even harsher conditions fishing off the Grand Banks of Newfoundland, including The Fog Warning (Halibut Fishing) (1885), again in oils. For these Homer went out with the herring fleet in 1884, which must have stirred fond memories of the fishermen of Cullercoats.

Watercolours such as Sharks (The Derelict) (1885) showed that his time at Cullercoats had brought about lasting change, which ensured his well-deserved reputation as one of America’s greatest painters.

In the next and last article in this series, I will try to assemble the large-scale narrative from a selection of the very best of Homer’s paintings of Cullercoats.