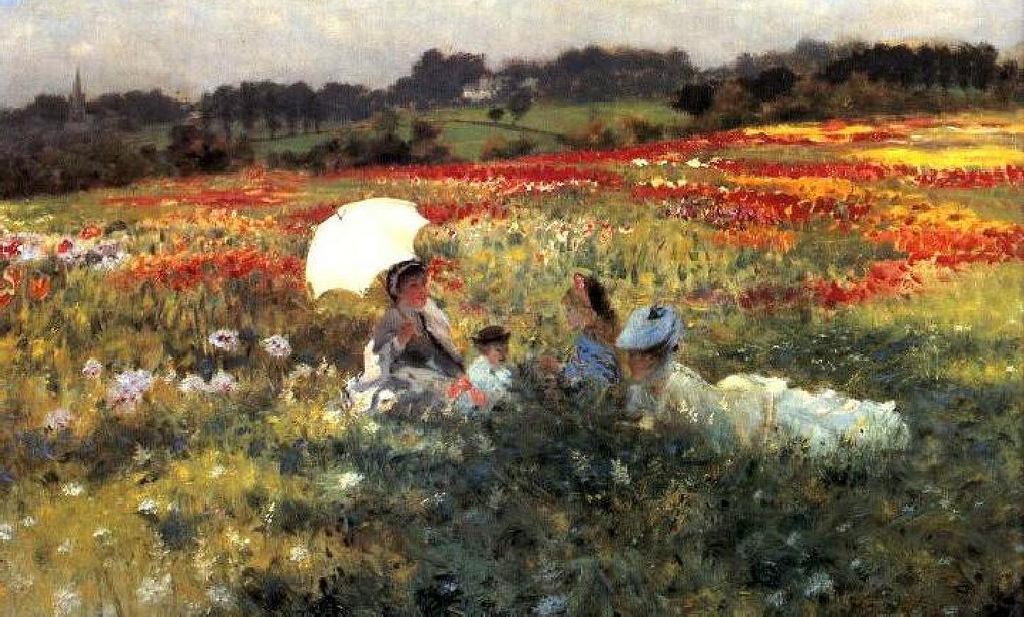 By 1880, De Nittis was well-established and commercially successful, as I have explained in the previous article in this series.

Artistically he had extensive contacts in London, Paris, Naples, and beyond. He remained friends with several of the core Impressionists, although Monet seemed happier dealing with him as a patron and collector than as an artistic colleague. He, his wife and family socialised with other Impressionists, particularly Degas and Caillebotte, and with the small group of Italian Impressionists in Paris.

Although his paintings varied in their facture, when sketching or painting works which were not intended for public exhibition, he could be very painterly indeed. However, he could equally be quite tightly realist, for instance when producing canvases for the Salon or other exhibitions in which brushstrokes were still not quite proper. Technically he was extremely skilled, capable of matching the most able of the other painters of the day.

He showed five paintings at the National Exposition in Turin in 1880, which were very well received. Among them was one, The Passing of a Train, which remains the most difficult to date. Showing a classical Impressionist motif, a steam train in the country, it has the tight realism more typical of his early years, and some have dated it as early as 1869. However it seems strange that, if painted then, he should have shown it as late as 1880.

More typical is this oil sketch, Lady on a Red Divan (c 1880). A number of his winter landscapes have been dated to 1880, although again some may have been painted earlier.

The following year, 1881, seems to have been quieter, with only one notable exhibition, of pastel works with the Circle of Mirlitons.

He painted more at the horse races, including At The Races at Auteuil on the Chair (1881), and it is thought that this was the year that he painted his exceptional and thoroughly Impressionist In the Fields around London, although dates as early as 1878 have been proposed for that.

In 1882, he was in London for a time with James Tissot and Bastien-Lepage, and had his first exhibition at Georges Petit’s gallery in Paris, as part of the first Exposition Internationale which he had helped Petit to plan.

A second exhibition at Georges Petit’s Exposition Internationale followed in 1883, and the Musée du Luxembourg, Paris, purchased his The Place du Carousel Courtyard and the Tuileries in Ruins, now in the Louvre. The same museum wished to purchase his Place des Pyramides but could not afford to; De Nittis bought it back from Goupil and made a gift of it, from where it has now passed to the Musée d’Orsay. De Nittis visited Naples again, where he was saddened to discover copies of his Place des Pyramides being offered for sale.

This pastel Self Portrait probably dates from 1883.

This very ambitious painting of the horse racing at Longchamps was preceded by at least one pastel study. He also painted some quite intimate scenes from the social lives of the famous, including Princess Matilde entertaining in her ‘living room’.

In the Spring of 1884, he painted what was probably his most technically accomplished work, Breakfast in the Garden, in which his wife and young son are seen enjoying an open-air meal. His treatment of the reflecting surfaces of the glass, china, and metal is superb, comparable perhaps with the likes of Janet Fish in recent years. However the ducks and garden behind are wonderfully painterly, and show his control over facture.

This was one of three paintings which he had accepted for the Salon of 1884. However he died suddenly of a cerebral haemorrhage (stroke) on 21 August 1884, at the age of just 38.

The Galerie Bernheim Jeune, Paris, held a memorial exhibition in 1886, and his works featured in the Venice Biennale in 1901, 1914, and 1928. His major retrospective exhibition was held in his home town of Barletta in 1934.

In the next article I will show paintings which are probably correctly attributed to him, but which I have been unable to fully verify.

References (all in Italian)