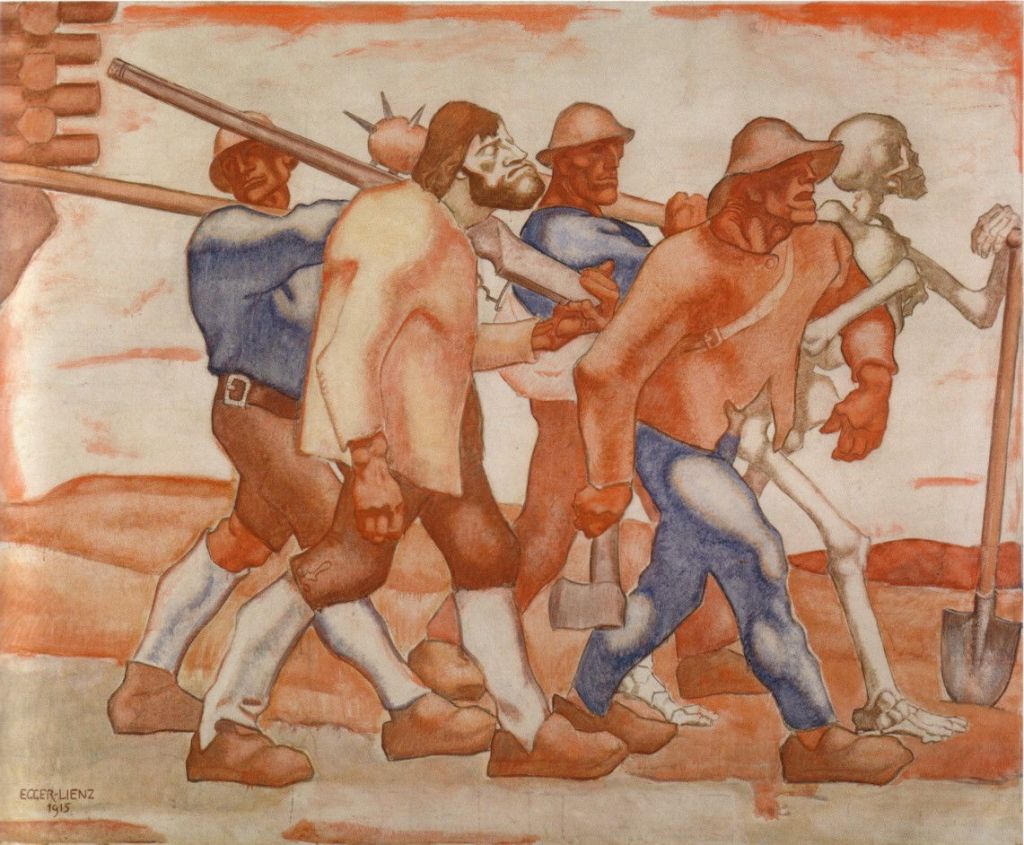 Humankind was nearly wiped out in Europe in the fourteenth century, not just once by the Black Death, but previously by the Great Famine. The latter was a succession of crop failures starting in 1315 and not recovering fully until 1322. Then just twenty-five years later, in 1347, the Black Death pandemic killed maybe as many as two hundred million over the next seven years.

Rulers and the church had to respond, and one strategy used was to tell the people that mass death affected everyone, from kings and cardinals down, that everyone was equal in their vulnerability, and that they were all in it together. Among early records, told in images to the largely illiterate population, was a mural in the Holy Innocents’ Cemetery in Paris, dating from around 1425, now sadly lost.

Elsewhere, in the Nordic countries in particular, the visual record goes back even further, to the time of the Black Death itself.

Remarkable frescoes in Nørre Alslev Church, on the island of Falster in Denmark, dating from around 1350, show what became known as the Danse Macabre, Dance of Death, or Totentanz. A king and bishop are shown here dancing with devilish figures representing death.

This is elaborated in Bernt Notke’s painting of The Danse Macabre from 1475-99, in Estonia. Among the dignitaries are a church leader, king, queen, cardinal, and a secular noble. At the left, one of the devilish figures sits playing a set of bagpipes, giving rise to the motif of the figure of death playing a musical instrument, such as a fiddle.

In 1493, Michael Wolgemut’s print of the Dance of Death was published in Hartman Schedel’s Chronicle of the World. Another famous series of woodcuts is attributed to Hans Holbein the Younger (1497-1543).

The image persisted, here in this wall painting of the Dance of Death from about 1520, in Ingå Medieval Church, Inkoo, in Finland. Like many such paintings, this was covered over with whitewash during the Reformation, and only rediscovered later.

After the Renaissance, the Dance of Death seems to have all but disappeared from paintings until it was revived in the middle of the nineteenth century. For some, the combination of rural poverty, overcrowded and disease-ridden cities, and deadly wars across Europe, brought back the conditions of the fourteenth century. The Dance of Death was also taken up by composers including Liszt, Saint-Saëns and Mahler.

James Tissot’s Dance of Death or the Way of Flowers, Way of Tears was among his earliest successes at the Salon in 1860, and one of several paintings of the Middle Ages he made at that time.

I’m unsure whether Anton Romako’s Dance of Death on the Battlefield in Front of Burning Ruins (1882-85) refers to a specific war, but the artist was spoilt for choice over the previous decades, as weapons became ever more deadly.

Totentanz (Dance of Death) IV (1915) is a motif which Albin Egger-Lienz painted in several different versions, showing the skeletal figure of death walking out with three men armed with hefty clubs and other weapons, the artist’s reinterpretation in the light of his first-hand experience in the First World War.

Alex Akindinov’s contemporary Dance of Death (2008-09) features a giant figure of death playing a violin over some skeletal musicians, for a group dancing around an open fire beside a graveyard.

As with so many of these longstanding themes in visual art, how appropriate this seems in the light of the last few years.