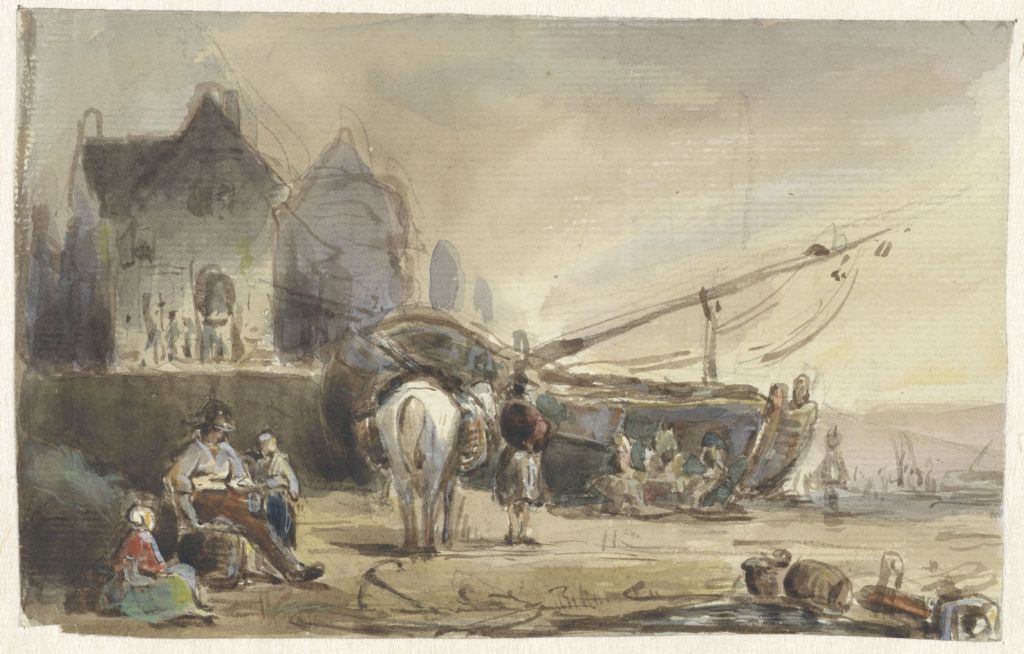 Two hundred years ago today, on 16 February 1822, the popular Dutch painter Herman Frederik Carel ten Kate (1822–1891) was born in the Hague. In the first article yesterday, I covered much of his career with a small selection of his paintings. In this article, I add just one more work for which I have a date, and seven which are unfortunately undated.

The Music Room, painted by Ten Kate in 1871 using oils, shows the fine quality of his very conservative oil paintings. It’s worth bearing in mind that at this time the French Impressionists had already established their very different style, and this work is more typical of paintings from a century earlier. While this music room features a couple singing to the accompaniment of the piano, and there are musical instruments in the centre foreground, everyone else in the room is engaged in decidedly non-musical activities.

The remainder of Ten Kate’s paintings are unfortunately undated.

This watercolour of The Dispute shows the start of a what threatens to be a pub brawl, set in the distant past. As with his other watercolours, he has painted this more loosely than he did his oils.

Officers by the Fire in an Old Dutch Interior is another loose watercolour of a period scene, probably from the Eighty Years’ War.

This watercolour of Two Men Seated at a Table almost merits being termed a sketch.

Most of Ten Kate’s landscapes appear to have been painted early in his career, making it unfortunate that this Beach Scene with Boats and Fishermen is undated. It’s very gestural and appears to have been sketched in front of the motif.

Ten Kate’s oil painting of a Rococo Interior features finely detailed figures, but the large paintings on the wall are pure Rococo.

I wonder if there’s an element of self-portrait in his Painter in an Inn, despite it once again being set during the Eighty Years’ War.

Finally, A Soldier and Men in an Inn is another of Ten Kate’s period scenes, this time showing a room with the walls decorated with blue on white Delft tiles, which became popular during the Dutch Golden Age.

During his lifetime, Ten Kate was hugely popular with the Dutch public, and many of his paintings were turned into prints and used as book illustrations. He died at the age of sixty-nine, on 26 March 1891, in the Hague. Within a decade his work had been almost forgotten as the twentieth century brought Modernism, in the work of artists like Karl Isakson, whose life and untimely death I’ll be commemorating on Friday and Saturday.