In the early days of the original M1 Macs and versions of Big Sur prior to 11.4, installing and setting up a bootable copy of macOS on an external disk was unreliable and often failed. I’m therefore surprised that users still contact me claiming that they’ve had problems with more recent versions of macOS, including Monterey, and with the new M1 Pro and Max models. As a sequel to my article about the basic principles of using an M1 Mac, this explains how to set up a bootable external disk in Monterey on an M1 Pro. Total time taken should be a few minutes, plus the time required to install macOS on the external disk.

My starting point wasn’t a freshly formatted disk, but a SATA/USB-C SSD which has already been divided up into multiple containers (partitions) containing bootable versions of macOS. One happened to be Monterey 12.0, which I was only too happy to sacrifice for this purpose. One important point here is don’t attempt to do any of this with 12.0, as it could well fail miserably.

I erased the Volume Group in that container using Disk Utility. This gives a detailed commentary, which now makes clear that any Preboot and Recovery volumes are also deleted, and that references to xART sessions are also removed. The latter relate to the recognition of that bootable volume, and confirm that it has thoroughly ceased to exist.

I then ran the standard macOS 12.0.1 Installer app downloaded from the App Store, from the main Applications folder. If you really want, you can do this all in Recovery instead. When invited to choose the disk on which to install macOS, I selected the APFS volume in the correct container of my external disk.

Before the installation process can start, the bootable volume needs an owner. As I work from the primary admin account and there are no other users, the choice isn’t difficult. This user doesn’t need to be an admin user as such, but they should already have access to the encrypted Data volume on the internal storage so they can be recognised as an owner. 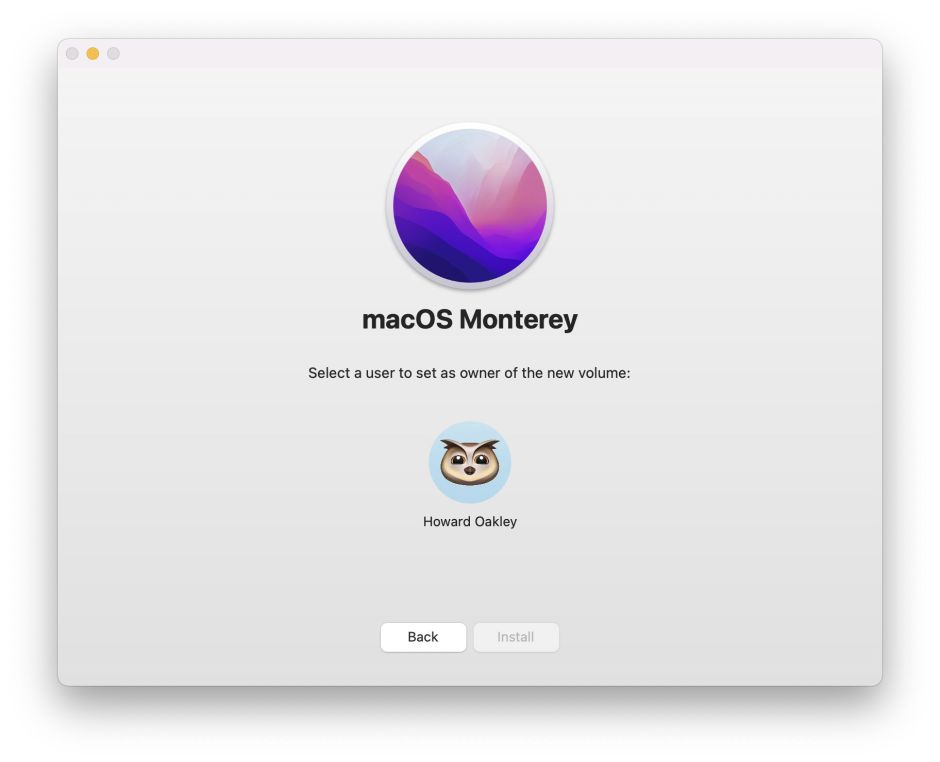 The installer then offers to copy the account settings for that user (as the owner of the external volume). The straightforward option here is to tick that box, which eventually will create the account as the primary admin user with the same settings. If you really don’t want to do that, then life can get more complicated, and I’ve ended up with two different user accounts as a result.

You’ll then be asked to enter the owner’s password for the installation to continue. If you’ve been keeping this simple, that’s the primary admin user who will have an account on the external system, and the current user – you.

The installation follows two phases, as usual. The first, during which the Monterey graphic is displayed in its window, almost reaches the end, when it displays that one minute is remaining. For a while then time stands still. That Cupertinian minute may extend into several Earth minutes, sometimes as long as half a hour. When it reaches an hour, you should suspect that your installation is going to fail, in which case you return to the start, check that you’re doing everything right, erase the volumes and try again.

The second phase takes over, with its black screens, erratic progress bars, and so on. At one time I wondered whether some of this was just done for effect, to make the install process look complicated, when all that was really going on was fairly mundane file copying. That’s certainly not the case now, with the signed and sealed system snapshot (SASSS, more normally termed the SSV).

Your Mac then boots silently from the new installation of macOS on your external disk, and you have to take it through personalisation and setup as normal. One good thing about such external disks, if you opted to copy account settings, is that many of these steps are dropped, because those settings have already been obtained. There’s also the obligatory 2FA step for your Apple ID and iCloud access. Finally you’ve got the Finder up with your new system all ready to use.

To start up from your internal storage, you then either use the Startup Disk pane, or start up in Recovery and select your startup disk there.

There’s one final piece of etiquette concerning bootable external disks with M1 series Macs: don’t shut your Mac down and disconnect that disk when your Mac is expecting to boot from it. Although I gather this has been fixed in Monterey, I underwent Big Sur’s aversion therapy, which consisted of endless boot loops resulting from a kernel panic when the boot disk couldn’t be found. I don’t care how well that might be fixed, it’s something I’d rather never experience again. If you’re going to disconnect the external disk, it’s much kinder to restart from your internal disk, eject the external disk, then shut down.

If you want to read more about ownership and security, this article explains it for Big Sur. I will write an update once details for Monterey have been published by Apple in its Platform Security Guide.

I hope this has dispelled some of the rumours about using external boot disks with M1 series Macs, which seem still to be based on Big Sur before 11.4. Installing, configuring and using them is now highly reliable, quick and simple. I’m sure that someone will be able to find a model of SSD which doesn’t yet work perfectly, but this demonstration is based on a regular retail Samsung SSD fitted inside an anonymous case bought cheaply from Amazon, and a regular Thunderbolt 3 cable. No witchcraft or incantations were involved.