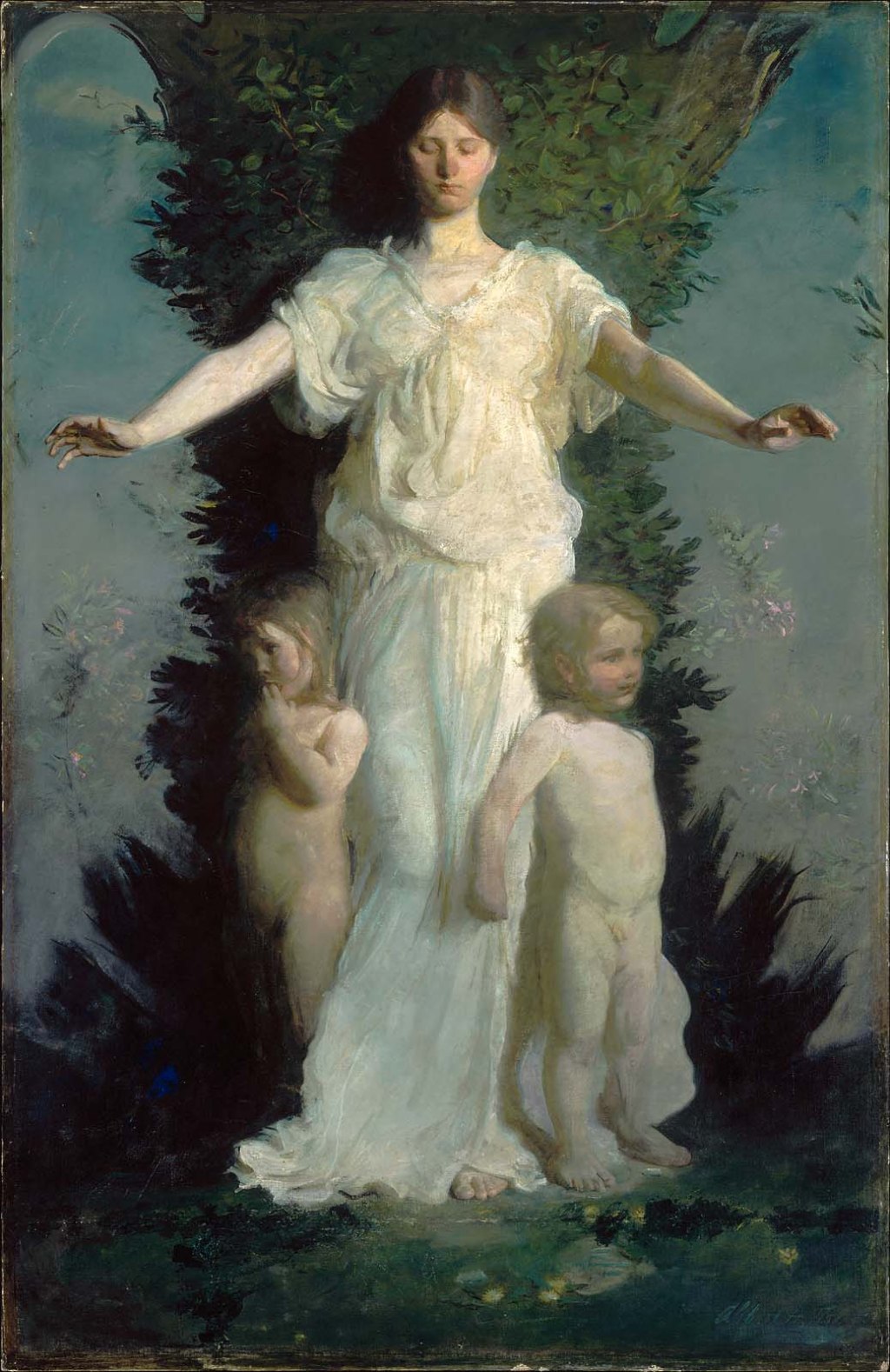 Tomorrow I remember the centenary of the death of one of America’s most popular painters during the 1890s, who surprisingly survived the rise of modernism in the early twentieth century. Since the death of Abbott Handerson Thayer (1849–1921) on 29 May 1921, though, his paintings have been largely forgotten. He’s unusual for being an early advocate of military camouflage; although he made little headway in campaigning for its use during the First World War, by 1939 his ideas had become widely adopted.

Thayer came from a medical family who lived near Keene, in deepest rural New Hampshire. Being surrounded by nature, his first interest was natural history, but he was encouraged to paint by an amateur who painted animals. He gained himself a place at the Brooklyn Art School and the National Academy of Design, so moved to Brooklyn at the age of eighteen. He continued with his preference for painting animals and natural history, and exhibited with the Society of American Artists.

He must have shown great promise at that time, as in 1875, when newly married, he sailed to Europe and won himself a place at the École des Beaux-Arts in Paris, studying under Henri Lehmann and Jean-Léon Gérôme.

The following year he painted this wonderful oil sketch of Landscape at Fontainebleau Forest (c 1876), which is probably his loosest and most Impressionist painting.

Thayer and his wife returned to New York in 1879, and he set up his portrait studio in Brooklyn and started to train his own pupils. He met with early success: in 1881 he went to paint Mark Twain in Hartford, CT, and in 1883 had a summer studio built on property owned by the banker James Stillman.

James Stillman commissioned Thayer to paint portraits of his sisters Bessie and Clara. After painting Bessie alone in 1883, the following year he painted them together in his most successful portrait, The Sisters (1884). He started work on this in the summer of 1883, and found the going slow and the composition far from straightforward. They are shown in a doorway, Bessie in front, Clara behind holding her sister’s waist. Although criticised for technical faults and laboured brushwork, its quiet grandeur makes it one of Thayer’s finest paintings.

Just as his career was developing so successfully, Thayer suffered a succession of personal tragedies. Their two young children died only a year apart. His wife developed severe depression after the death of her father, and was confined to an asylum as a result.

He sketched this simple floral Still Life in about 1886, perhaps as a relief from portraits.

By the end of the 1880s, Thayer started to develop the theme of the idealised woman, as in this Winged Figure from 1889. His model for some of these was his daughter Mary, and for at least one of those paintings she had to stand with feathered wings nailed to a board behind her.

This second floral still life of Roses from 1890 is less sketchy, with the petals worked in detail.

Thayer painted occasional portraits of classical goddesses, here Hebe (c 1890), the youngest daughter of Jupiter and Juno, and goddess of youth. As the youngest of the Olympian deities, she was their cupbearer, and appropriately holds both a cup and jug.

In addition to his single standing figures of winged women, Thayer had a fondness for triple portraits in the form of Virgin Enthroned (1891). His ideal woman is here wingless, and seen with a child on each side.

Thayer’s wife died in the asylum that year. He soon married again, to a long-standing friend and the daughter of the proprietor of The Sun newspaper in New York (not to be confused with the later New York Sun). The family moved back to Thayer’s rural New Hampshire, and ten years later settled in Dublin, close to where Thayer had spent his childhood. They appear to have led an unusual if not eccentric life, sleeping outdoors to enjoy the ‘fresh air’, and Thayer’s idiosyncratic views became more overt as he grew older.

In the summer of 1895, Thayer painted one of his favourite models, the daughter of a Harvard geologist, as the virtue Caritas. This was completed in his summer studio in Dublin. He’s thought to have developed this painting from a figure in an allegorical mural which he painted together with Elihu Vedder and John LaFarge two years previously, in the art museum at Bowdoin College in Brunswick, Maine.

His composition is an intermediate between the single standing figures, without wings, and a triple portrait, as the virtue Charity extends her arms to protect the two infants.

After it was first exhibited in Philadelphia in 1895, when it won a large prize, Thayer seems to have developed a dislike for this painting. He first asked for its title to be changed, then after it had been bought for the Museum of Fine Arts in Boston, he wrote to the director asking if he would trade it in for another, as Thayer then detested it. Fortunately it appears that his offer was declined due to its popularity with other artists and critics.