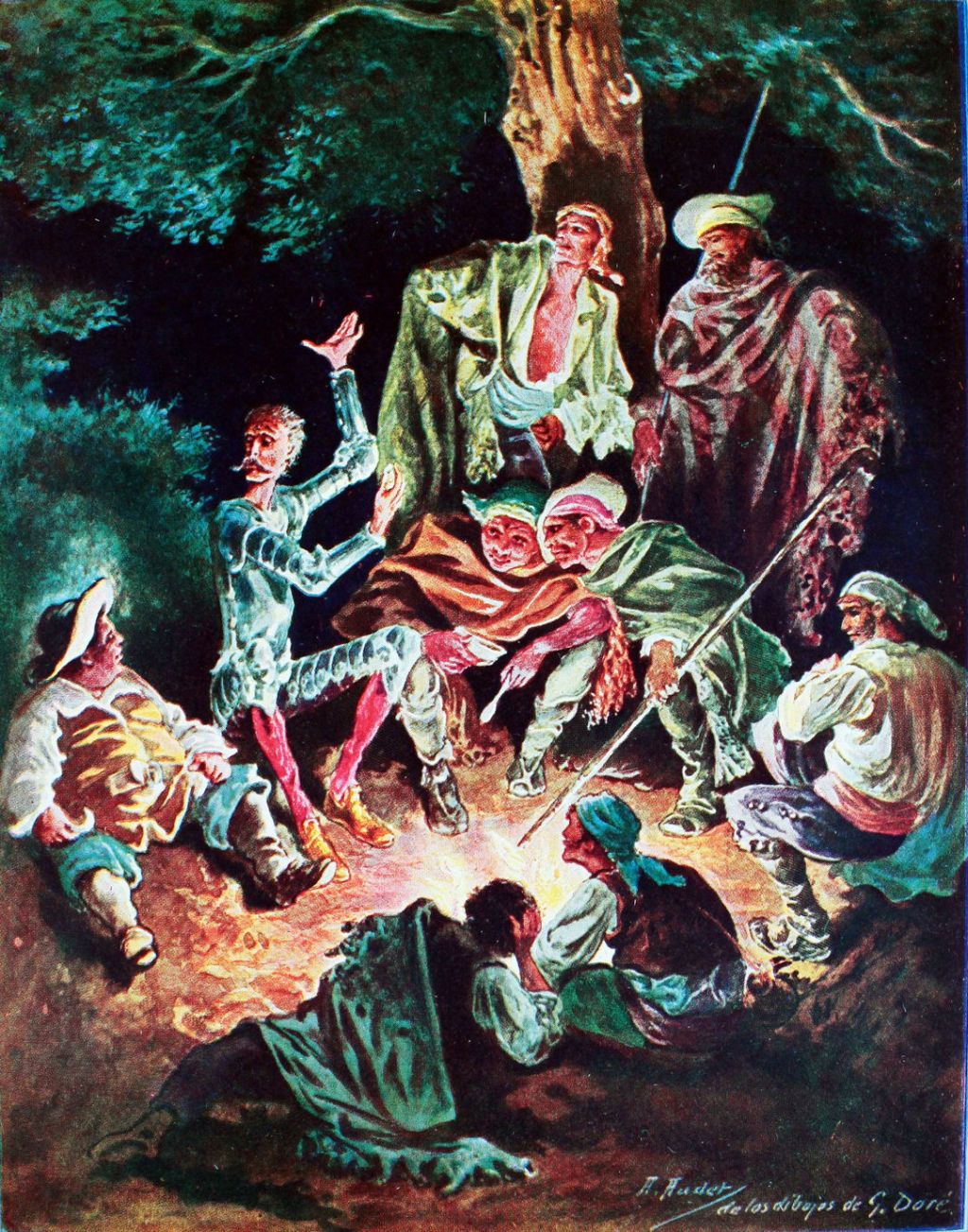 In the previous episode, Don Quixote had stayed at home for a fortnight, during which he recruited his squire Sancho Panza. They rode off and the knight attacked windmills, believing them to be giants. After a night sleeping under some trees, they next attacked a couple of friars on mules, and a party escorting a Basque lady in a coach. She was travelling to rejoin her husband, but Don Quixote believed she was being abducted. Sancho Panza was given a good kicking by one of the friar’s servants before his knight was confronted by one of the lady’s Basque escorts. His battle with that escort intensified to the point where they both charged at one another with their swords raised, ready to kill.

Cervantes opens the second part of the first book with a long and amusing editorial commentary, in which he describes how he (fictionally) discovered and bought notebooks containing the story of Don Quixote from a Moor in Toledo, and hired him to translate them from Arabic. After this aside, he resumes the main story.

The Basque escort delivered the first blow with his sword, but the blade twisted before hitting Don Quixote on the left shoulder, carving away much of his helmet and part of his ear. The knight of La Mancha flew into a rage, and struck the Basque a hefty blow to his head, which was only protected by a cushion from the coach. The escort started to bleed from his nose, mouth and ears, and would have fallen from his mule had he not held tightly onto its neck. This cast his mount into panic, and it eventually threw its rider.

Don Quixote dismounted quickly, rushed over and held his sword at the man’s eyes, telling him to surrender or die. At this the ladies in the coach intervened and pleaded for his life. When the knight demanded that, in return for his clemency, the Basque should put himself at the disposal of the lady Dulcinea, the ladies were only too happy to agree.

As Don Quixote prepared to remount Rocinante, Sancho had got to his feet again. The squire rushed over to assist his master, knelt, and asked him for the governorship of an island which he had previously been promised, which he must have just won in the battle. Don Quixote told him to be patient, then rode off quickly into a wood without bidding farewell to the ladies in the coach.

It took a little while for the squire’s donkey to catch the knight up. When it did, he implored his master to seek refuge in a church to avoid the wrath of the Basques. In the discussion that ensued, Don Quixote revealed that he should have brought with him the Balsam of Fierabras, one drop of which would have healed his wounded ear. The amazed Sancho imagined its commercial potential, but ended up tending to the knight’s ear all the same. After further exchanges, the two shared the meagre food which the squire had with him, then hurried on towards the next village before nightfall.

They reached some goatherds’ huts, where they decided to stay the night after receiving a hearty welcome. Don Quixote and his squire settled with six of the goatherds for a shared meal of boiled goat. Although the knight invited his squire to eat beside him, Sancho told his master that he preferred to eat standing and alone. Don Quixote pulled Sancho’s arm and made him squat beside him, where the two of them gorged first on large lumps of goat followed by sweet acorns and hard cheese. The wine flowed freely.

The goatherds ate in silence, puzzled at the knight and his squire before them. Don Quixote launched into a long and rambling account of the golden age of chivalry, which was lost completely on his hosts.

They brought over a young fiddler who sat on a treestump, played and sang a song about a couple. Sancho was then ready to sleep, but his master asked him to dress his ear again. One of the goatherds applied rosemary leaves and salt, which proved perfect.

That completes the eleventh chapter of the first book of Don Quixote.