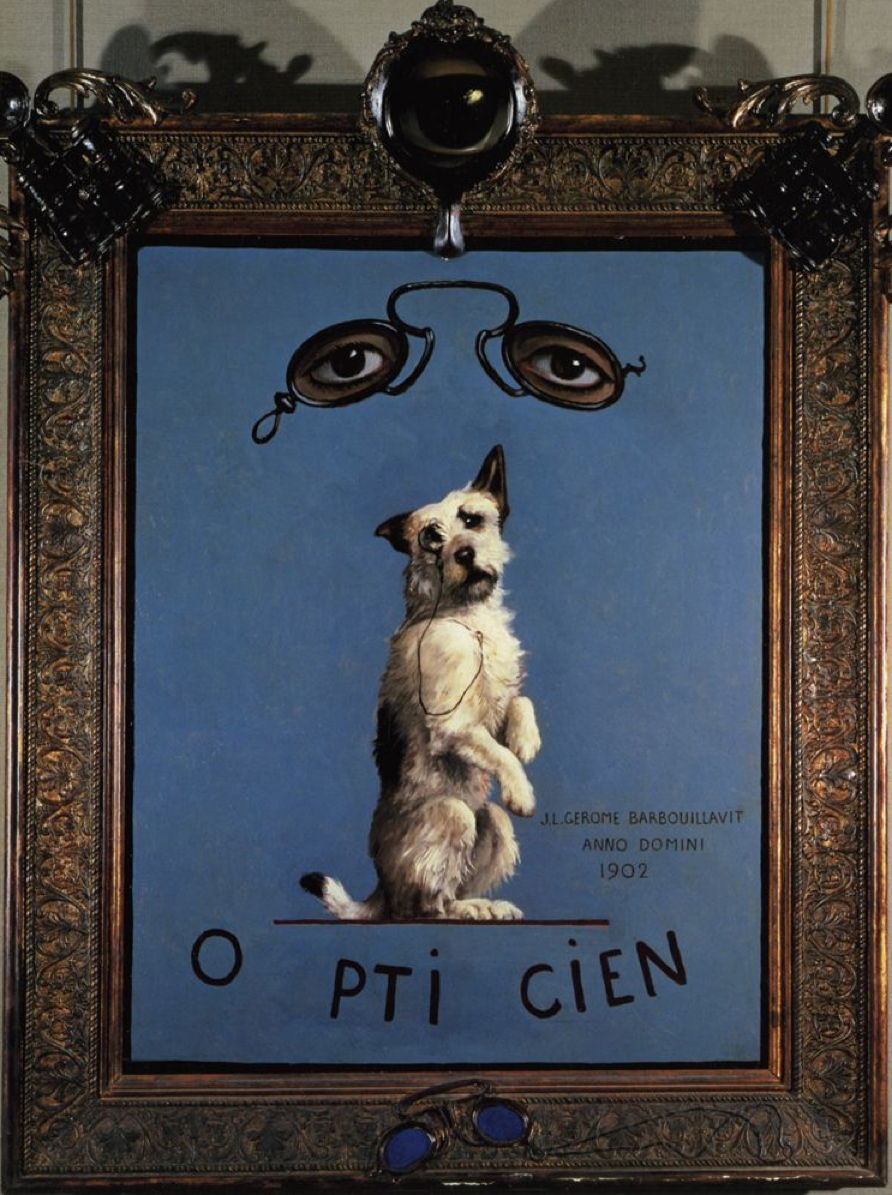 In the first of these two articles looking at some humorous paintings, I started with pioneers Hieronymus Bosch and Pieter Brueghel the Elder, and worked my way through visual and other jokes until I reached the late nineteenth century, where I resume today.

In even the most strait-laced society, animals and children can always raise a smile, and they were popular in ‘lighter’ paintings in the late nineteenth century too.

In Briton Rivière’s Blockade Runner (1888), four dogs are waiting for a cat to try to get out when it stealthily creeps along the top of a wall where they can’t reach.

In his undated The Mask Prank, a young boy is still laughing as his mother scolds him for surprising and upsetting his younger sister, who is now crying at her mother’s skirts. The young girl has dropped her spoon, and mother may have dropped and broken something too.

Chierici’s undated A Scary State of Affairs shows another humorous domestic scene, when an infant has been left with a bowl on their lap, and that room is invaded first by chickens, then by large and aggressive geese. The child’s eyes are wide open, their mouth at full stretch in a scream, their arms raised, and their legs are trying to fend the geese off.

One of the reasons for this pair of articles is my starting a new series telling the stories from Miguel Cervantes’ wonderful Don Quixote. This enjoyed a revival during the nineteenth century, from which I show just two of the many paintings which capture its deep humour when telling the story in which Don Quixote sees some windmills as giants, and charges at them on his long-suffering horse Rosinante.

José Moreno Carbonero’s Don Quixote and the Windmills from about 1900 shows the tragi-comic outcome.

Ricardo Balaca’s illustration from 1880-1883 shows the consequences to the self-imagined knight and his charger.

Several of Lovis Corinth’s paintings are also humorous. My choice involves a story seldom associated with laughter, though, that of Salome and the beheading of John the Baptist.

Corinth’s second and more finished version of Salome from 1900 uses laughter in a more subtle way, as part of an elaborate narrative.

Salome is staring intently at the lower abdomen of the executioner. Her right hand is stretching open the left eye of the severed head of John the Baptist, which appears to be staring up at her. The executioner and the young woman at the top right are laughing at one another, but a third woman beside her has a serious, almost sad expression, as she stands holding a very large peacock fan.

The chain of gaze here is central to the painting’s narrative: John’s eye stares at Salome, who stares at the executioner’s crotch, who laughs at the young woman at the top right, who laughs back at him. Watching sombre and detached from behind is the figure of death.

Corinth’s Homeric Laughter from 1909 is a more obvious platform for humour, this time centred on the age-old jokes surrounding cuckolds and adultery without which Shakespeare’s plays would be dull and dry.

Corinth offers a clue to its reading in the long inscription (originally in German translation):
unquenchable laughter arose among the blessed gods as they saw the craft of wise Hephaestus
together with the reference to Homer’s Odyssey book 8 line 326.

This refers to a section in which Odysseus is being entertained by King Alcinous, after meeting Nausicaä on the island of the Phaeacians. To cheer Odysseus up, the bard Demodocus tells a tale of the illicit love affair between Ares/Mars (god of war) and Aphrodite/Venus (goddess of love), which has featured extensively in art.

The last narrative painting which is securely attributed to Jean-Léon Gérôme is a little joke of his which proved to be his greatest influence on twentieth century art: his Optician’s Sign from 1902. This plays on the French term opticien, and chien, the French for dog, a verbal pun which he translates into the visual, just as Brueghel had done. Gérôme apparently entered this in a competition. Years later, is was seized upon by Surrealists, and proved an inspiration for several of them.

In Bonnard’s The Cherry Tart (c 1908), he has extended one of his still lifes at the table to include two participants, with a delightful touch of humour. At the far right is, I believe, Marthe, and at the far left a young boy. In the middle of the painting is Marthe’s dog Black, his eyes peering longingly at an uneaten segment of cherry tart. I wonder how many slices of cherry tart the dog ate by the time that Bonnard had finished this painting.

My last painting, by Franz von Stuck, parallels Corinth’s Salome, in tackling a traditionally difficult and serious story with a touch of ribald visual humour.

Von Stuck’s second version of Susanna and the Two Elders from 1913 follows the traditional account faithfully, but uses a joke to make the elders look even more ridiculous: the small stream of water emerging from the orifice set in the wall of the pool is readily misinterpreted as the urine of the elder dressed in red.

In any medium, being humorous isn’t easy, and the danger of your joke falling flat or being deemed in poor taste is ever-present. Painting a joke is a gamble: get it wrong and you can’t talk your way out of it, or distract the reader with something else. I hope these have succeeded in brightening your weekend, as they have mine.