When running Big Sur 11.1 on an M1 Mac, making a bootable external disk is entirely unpredictable. Some users seem to have all the luck, and the first external SSD they connect to their M1 Mac works fine with the Big Sur installer, and they don’t look back. For others, the macOS installer just can’t do the trick, and a high-quality SSD is left unbootable.

Now that Big Sur can be updated to 11.2, I’ve been looking at how that affects external boot disks, and whether it finally enables them all to work. However, far from 11.2 solving this problem, it actually makes it worse.

As far as I can tell, macOS 11.2 is no less unreliable at this than was 11.1. Using the 11.2 full installer app, the one SSD (Samsung X5) that worked for me before works still, and the SSD which wouldn’t take a bootable installation of 11.1 still won’t oblige.

The problem occurs at the end of the normal installation phase, when presumably the installer is writing hashes up the Merkle tree, with the installer window claiming that there’s only About a minute remaining. At that stage, Activity Monitor reports that com.apple.MobileSoftwareUpdate.UpdateBrainService is taking lots of CPU, and there’s sustained and intense disk activity for many minutes. When that finally completes, instead of the Mac restarting from the external disk to complete installation, the installer just quits. Trying to restart from the external disk then results in an error.

Updating a bootable external disk to 11.2

As Apple hasn’t provided an update installer for 11.2, the logical way to update an existing bootable 11.1 external disk is to restart from it, and run Software Update. This didn’t work at all, as each attempt to start up from 11.1 on the external disk resulted in a boot loop kernel panic. The M1 Mac started to boot from the external disk, before the display went black for a while. It then tried again, and again, until I forced the Mac to shut down by holding the Power button in.

The only way that I could get that M1 Mac mini to start up successfully was by forcing shutdown uing the Power button, disconnecting the external disk, starting up in Recovery Options, and there setting it to start up from the internal disk.

The kernel panic was apparently because it “cannot find IOAESAccelerator”, which doesn’t seem to relate to the name of any system file.

Given that I couldn’t boot from the external disk, my next step was to try installing 11.2 to it. This failed late during the installation, with the common installation error that ownership of the disk couldn’t be set.

The only option left now was to start from scratch and format the external disk using Disk Utility, then install a fresh copy of 11.2 on it. This eventually worked, but only after encountering further problems. During installation, I elected to copy account settings from my internal SSD, but this failed because “This Mac can’t be used to migrate data”. Additionally, I was informed that “Due to an issue with unlocking this system, you can’t migrate. Please update this Mac and retry.” 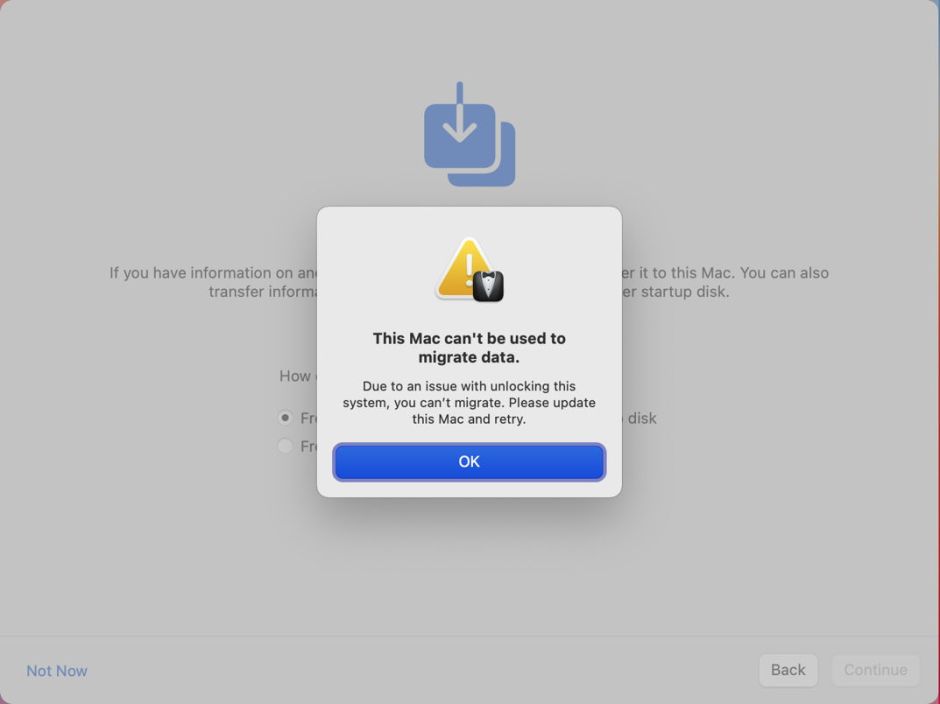 I therefore had to create a new user on the external disk, but was puzzled when that user had to have a different user long and short username. Later I discovered that the migrated user account had been created after all. The bootable external disk therefore now has two admin users: one copied from the internal SSD, the other created afresh.

That said, my Samsung X5 is at last a bootable external SSD running Big Sur 11.2. It also appears reliable switching to and fro using the Startup Disk pane.

Big Sur 11.2 does nothing to make it easier to make external disks bootable. Some SSDs work, others don’t, and it seems a gamble as to which will work with any given M1.

It doesn’t appear possible to update a bootable external disk, only to format it and install a fresh system, as if the disk had never had macOS installed before.

The 11.2 full installer is incapable of copying existing account settings from the internal SSD to a fresh installation of 11.2.

M1 Macs currently don’t work reliably with bootable external disks. Users who want to boot from an external disk would be wise not to buy an M1 model, until Apple has fixed these problems completely.

With the release of 11.2.1, I have tried to update my bootable external SSD from 11.2 to 11.2.1. This fails repeatedly after performing a full download of the update, merely reporting that “some updates couldn’t be installed”. It’s thus still impossible to update a bootable external disk: the only solution is to perform a complete format and install. As the 11.2.1 full installer isn’t yet available through softwareupdate, that too will fail to deliver an update from 11.2.