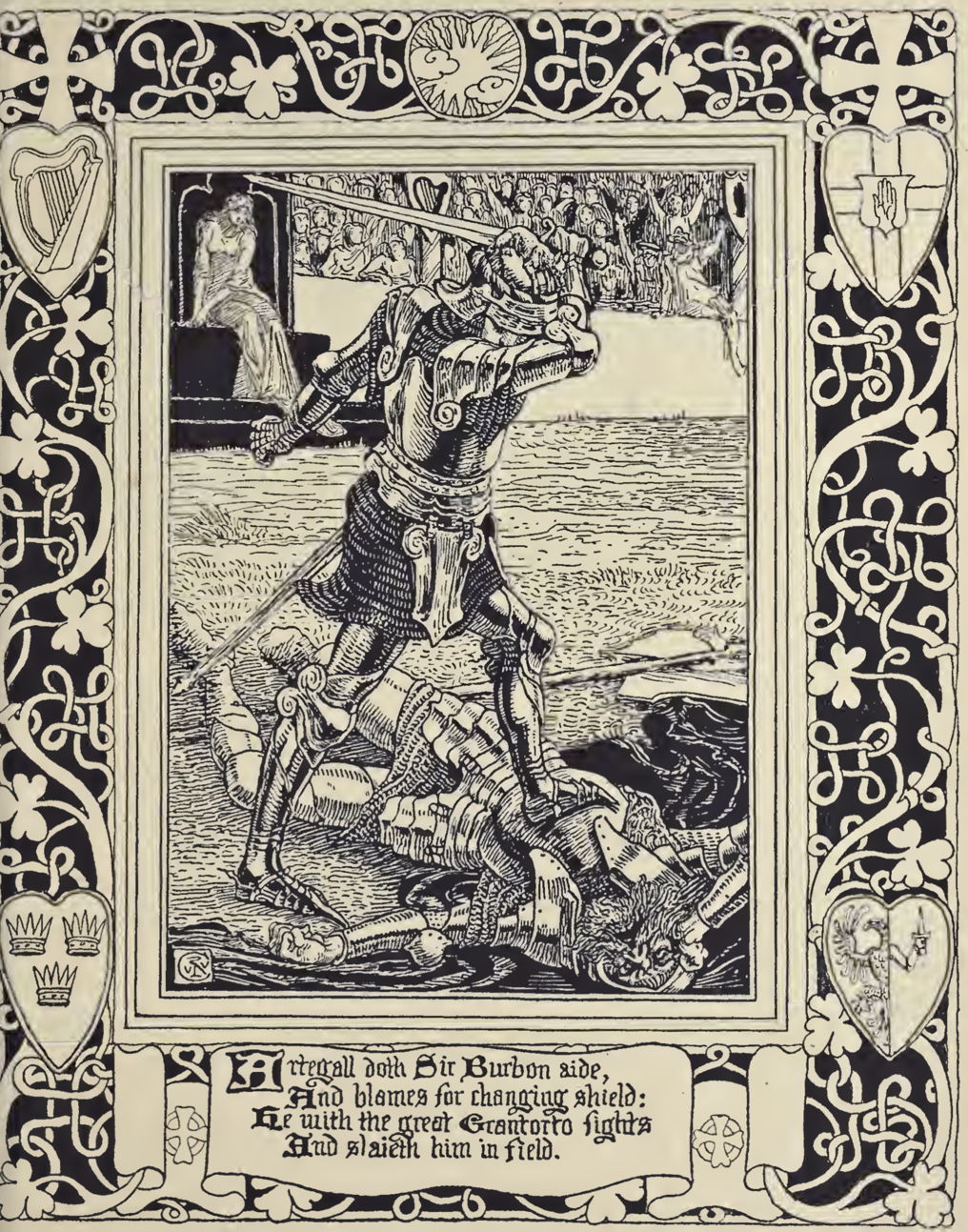 In the last episode, after removing the threat posed by the Souldan, Sir Artegall and Prince Arthur reached Queen Mercilla’s palace, where they gave their verdict in the trial of the evil sorceress Duessa. She was accused of numerous crimes including a plot to overthrow the queen, and they found her guilty. In deep sadness, Mercilla passed the only possible sentence, that of death.

Prince Arthur takes the enterprize
for Belge for to fight;
Gerioneos Seneschall
he slayes in Belges right.

Artegall and Prince Arthur stay with Mercilla for a while, until two young men bring a request to help their widowed mother Belge, whose lands have been taken over by the tyrannical giant Geryoneo. He had conned the widow into letting him protect her, only to dispossess her and kill most of her children. He’s not only a giant, but has three bodies, with three sets of arms and legs to match. Prince Arthur accompanies the two back to aid their mother, while Artegall resumes his own quest.

Once he arrives in the marshlands where Belge is now in hiding, Arthur takes her to a nearby city which is overlooked by one of the tyrant’s castles, where the giant has already set up an altar with a guardian monster which eats human sacrifices. That castle is held by Geryoneo’s seneschal, a fearsome warrior whom Arthur challenges. They are soon in combat, when the seneschal’s lance embeds in Arthur’s magic shield, but the prince’s lance drives home immediately and kills his opponent.

Three more knights ride fron the castle to attack Arthur, but his lance kills one and the other two flee. The prince pursues them, killing a second whose body stops the castle gate from being closed. He kills the third inside the castle’s great hall, causing its other inhabitants to abandon it for Arthur, Belge and her sons to occupy.

Prince Arthure overcomes the great
Gerioneo in fight;
Doth slay the Monster, and restore
Belge unto her right.

On hearing of Arthur’s success, Geryoneo is enraged and rides to the castle, where he demands its return. At that, the prince rides out in full armour and challenges him. The two fight without delay, as the giant swings his huge iron axe at the knight with all six of his hands grasping its haft. Arthur meets each blow with his magic shield, seizing the opportunity to slice one of the giant’s arms off.

The next axe-blow crashes down on the prince’s horse. Arthur leaps from his saddle and continues fighting on foot, cutting off two more of Geryoneo’s arms. In a moment, the giant loses his balance, allowing Arthur to spring forward and bury his sword deep into his side, passing through all three of his bodies and killing him.

To the loud cheers of bystanders, Belge offers her lands to Arthur in return for his actions, but he declines, saying that he only seeks virtue as a reward. She asks the prince to remove the monster at Geryoneo’s sacrificial altar, which he does straight away. It has the body of a huge dog, the claws of a lion, the barbed tail of a dragon and an eagle’s wings, but the head of a woman. Arthur first shines the light from his magic shield to make the monster turn to flee, but it next turns back towards him and clutches his shield.

Arthur slices off its claws, for which the monster lashes him with its tail, which he severs. It spreads its wings and puts its full weight against his shield, providing him with the opportunity to carve open its belly and kill it. Another roar of approval rises from the crowd at his success.

In the meantime, Artegall and his servant Talus are making their way to defend Irena from Grantorto’s oppression. They meet an old knight who tells them that she is now captive, and unless released will be put to death in ten days time. The pair hurry on with even greater urgency.

They see a mob surrounding a knight who bears no shield. The rabble have also captured a lady who is clearly in distress. When Artegall rides up the mob turns against him, but with the help of Talus they’re quickly dispersed. The knight introduces himself as Burbon, whose lady had been seduced by Grantorto, who then sent a rabble to remove her. Burbon had been given a shield by the Red Crosse knight, but as it bore that knight’s emblem it had only brought him trouble, so he had cast it aside, for which Artegall admonishes him.

By this time the mob has reassembled, forcing Artegall and Burbon to disperse them again with the help of Talus and his flail. Burbon then tries to embrace his lady, who shrinks back until Artegall tells her off for breach of honour and faith. Burbon lifts her onto his saddle and they ride off, leaving Artegall and Talus to press on in their quest.

Artegall doth Sir Burbon aide,
And blames for changing shield;
He with the great Grantorto fights,
And slaieth him in field.

When they reach the coast, they sail to Irena’s country, where their landing is blocked by an armed horde. Talus sets about their opposition with his flail, and forces them to flee for their own safety. Their way clear, the pair ride off to encounter an army sent by Grantorto, which they soon conquer and put to rout. Artegall instructs a surviving herald to take his challenge to the despot.

The following morning Artegall is ready to face his enemy, and awaits Grantorto in front of his house. When he emerges, the giant is clad in full armour and wielding a heavy studded poleaxe. The two join battle, with Artegall dodging mighty blows from Grantorto’s fearsome weapon. A few glancing blows draw blood, but the knight bides his time until his opponent swings his poleaxe up for a deadly blow. Artegall then steps deftly forward and carves a deep wound in the giant’s side, causing him agony.

Artegall rains blow after blow on the giant, until he’s able to bring his sword down on his helmet, stunning him. This allows the knight to knock him over and swiftly cut the giant’s head from this shoulders.

Sir Artegall stays in Irena’s land to help restore law and order, as Talus roams at large punishing those who oppose it. Before they’ve completed their task, Artegall is recalled to Gloriana’s court, so they sail back across the sea. During their return, they meet a couple of old hags on the wayside, one holding a poisonous snake which she is gnawing, the other holding a distaff on which she’s spinning lies. They are Envy, who has snake venom dripping from her mouth, and Detraction, who takes delight in spreading false rumours.

With them is a monster with a thousand tongues, called the Blatant Beast. As Artegall rides past them, they turn all their anger and poison against him, accusing him of using treachery against Grantorto, and the Blatant Beast raises uproar. Artegall is not to be distracted by their display, though, and rides calmly past with Talus following.

This completes the fifth book of The Faerie Queene.

Sir Artegall, a mighty and good knight, with a deep sense of justice, who is betrothed to Britomart, but cannot marry her until he has completed his quest for Irena. The subject of this book. Taken to represent Lord Grey of Wilton, whom Queen Elizabeth sent to crush rebellion in Ireland, and the wisdom of fair justice.

Prince Arthur, son of Uther Pendragon, bearer of a magic shield which blinds his enemies and turns them to stone, and future king.

Belge, a lady whose lands have been stolen from her by the evil tyrant Geryoneo. A symbol of the ‘Low Countries’ of the Netherlands and Belgium, which were then ruled by King Philip II of Spain.

Duessa, Una’s opposite, an evil sorceress who personifies falsehood, and is the symbol of the Roman Catholic Church.

Geryoneo, a tyrannical giant with three bodies, three pairs of arms, and three pairs of legs. He cons Belge into trusting him, then occupies her lands and kills most of her children. A symbol of King Philip II of Spain.

Grantorto, an evil tyrant who has wrested all Irena’s lands from her, and is now the subject of Artegall’s quest.

Irena, a lady who went to the Faerie Queene’s court to seek aid to recover her lands from Grantorto.

Mercilla, a wise and graceful ruler who is challenged by the oppression of the Souldan. She sends her servant Samient to negotiate a peaceful settlement with him. Represent Queen Elizabeth I of England.

The Souldan, an idolatrous tyrant who challenges Mercilla for her land. A Sultan, who may represent King Philip II of Spain, England’s greatest enemy at the time.

Talus, the servant of Artegall, made of iron, who cannot stand any form of wickedness, and carries a heavy iron flail with which he enforces justice. Represents the letter of the law.