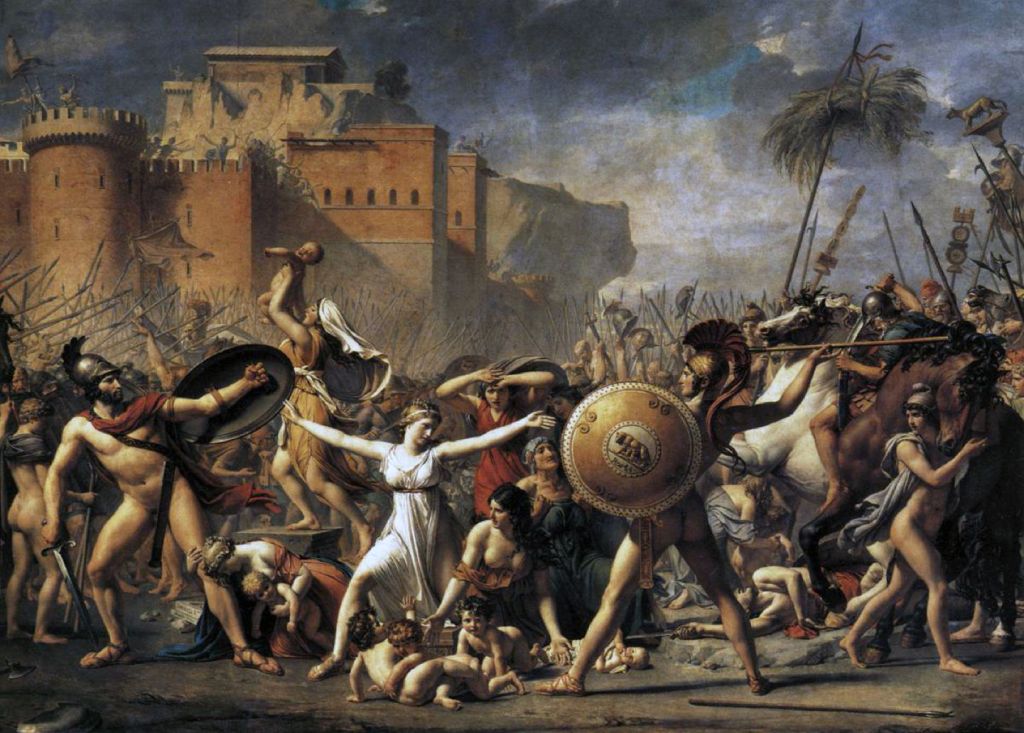 Having outlined the history of ancient Rome in paintings in chronological order, I now turn to the histories of some of its landmarks. This article looks at depictions of what was the centre of the city in classical times, the Capitoline Hill, containing its temples, and the Tarpeian Rock.

The Capitoline is one of the seven famous hills on which the city of Rome was built, although it wasn’t included within the ploughline established as the boundary of the original city by Romulus, according to myth. Around 753 BCE, the walls of the city enclosed only the Cermalus and Palatium (Palatine), and the Capitoline Hill lay outside to the north-west.

As the city expanded, newer walls enclosed the steep and rugged slopes of the Capitoline, and it was incorporated within the city’s defences. Later still, the walls were routed round the Janiculum and Campus Martius (Field of Mars), and the Capitoline became the central fortress within the city.

The hill and its major buildings are shown here in red.

In paintings, the Capitoline rose to fame in depictions of the story of the Sabine Women.

The ‘rape of the Sabine women’ has become one of the great motifs in painting, for which the essential background is the Capitoline Hill and the Tarpeian Rock, because of their importance in the narrative. As the bearded figure of Romulus stands overseeing the Abduction of the Sabine Women, the earlier of Nicolas Poussin’s two paintings of this motif, the hill and its precipitous cliffs dominate the distance.

When the Sabines were eventually ready to go to war against Rome for this outrage, they knew they had to capture the citadel on the top of the Capitoline. The captain of the guard there had a daughter named Tarpeia. In return for the golden armlets which Sabine warriors wore on the left arm, Tarpeia betrayed the city of Rome by leaving its gates open at night, allowing the Sabines to enter.

As the Sabines swarmed in, Tatius told them to leave what they carried on their left arm with Tarpeia. As they also carried their shields, many misunderstood the command, and Tarpeia was buried under so many shields and golden armlets that she was crushed to death. She was buried where she fell, and that became known as the Tarpeian Rock, and became the place from which traitors and other enemies of Rome were thrown to their death.

With the Sabines in possession of the Capitol, Romulus challenged them to fight. There followed a series of indecisive battles, until Romulus was struck on the head by a rock, and his troops started to retreat to the Palatine Hill. He had just regained order and commanded his forces to stand and fight, when the abducted Sabine women invaded the battlefield.

That is the remarkable scene shown in Jacques-Louis David’s The Intervention of the Sabine Women (1799). Looming over the city is the rugged Tarpeian Rock, where the traitorous Tarpeia had just been buried. Highlighted in her brilliant white robes in the foreground, and separating two of the warriors, is the daughter of Tatius, Hersilia, whom Romulus had married. The warriors are, of course, her father and her husband, and the infants strategically placed by a nurse between the men are the children of Romulus.

It’s notable that David doesn’t show a citadel on top of the hill, but the Temple of Jupiter Optimus Maximus, which was first built there in 509 BCE, to be replaced later following its destruction by fire in 83 BCE. Although the rape of the Sabine Women remains mythological, classical histories dated it to some time around 752 BCE, long before the first temple was constructed.

The next major depiction of the Capitoline Hill is from the great fresco painted by Francesco de’ Rossi to celebrate the achievements of Marcus Furius Camillus, around 396 BCE.

De’ Rossi’s frescoes show this as the Triumph of Furius Camillus. The young general rides high on a podium placed inside the chariot, at the left. Four white horses draw this, and the whole of Rome has come out to watch. Again the hill dominates the background, with the cliffs below the Tarpeian Rock on the left.

This engraving published in 1855 gives a plausible account of the hill and temple when viewed from the bank of the River Tiber to the south-west.

Italo Gismondi’s model, made in the 1930s, is thought to be a fairly accurate reconstriction of the hill and its temples.

In classical times, apart from the priests and priestesses of the temples on the Capitoline, their most important inhabitants were a flock of geese sacred to Juno.

Henri-Paul Motte’s Naturalist painting of the Sacred Geese of the Capitol from 1889 shows them being kept in ornate cages, although this loose goose seems to be arguing with one of the priestesses responsible for their care.

They’re claimed to have saved the city of Rome from invasion by the Gauls in about 390 BCE, when they raised the alarm and woke sleeping Roman soldiers with their watch dogs. Two years later the emperor Theodosius I closed all pagan temples in the city, which were plundered by the Vandals when they sacked Rome in 455. That was the start of over a millenium of decline and ruin.

When Piranesi made prints of the classical remains of Rome he included this Veduta with the Temple of Jove from about 1750-58. This shows the lesser of the two temples to Jupiter on the Capitoline Hill. This lies between the larger and more important Temple to Jupiter Optimus Maximus and the Forum to the south-east. It’s seen here in a state of ruin, with trees growing nearby, and livestock.

Francis Towne’s view of the Tarpeian Rock was painted in 1780, by which time most of the classical remains had been replaced with the more modern city.