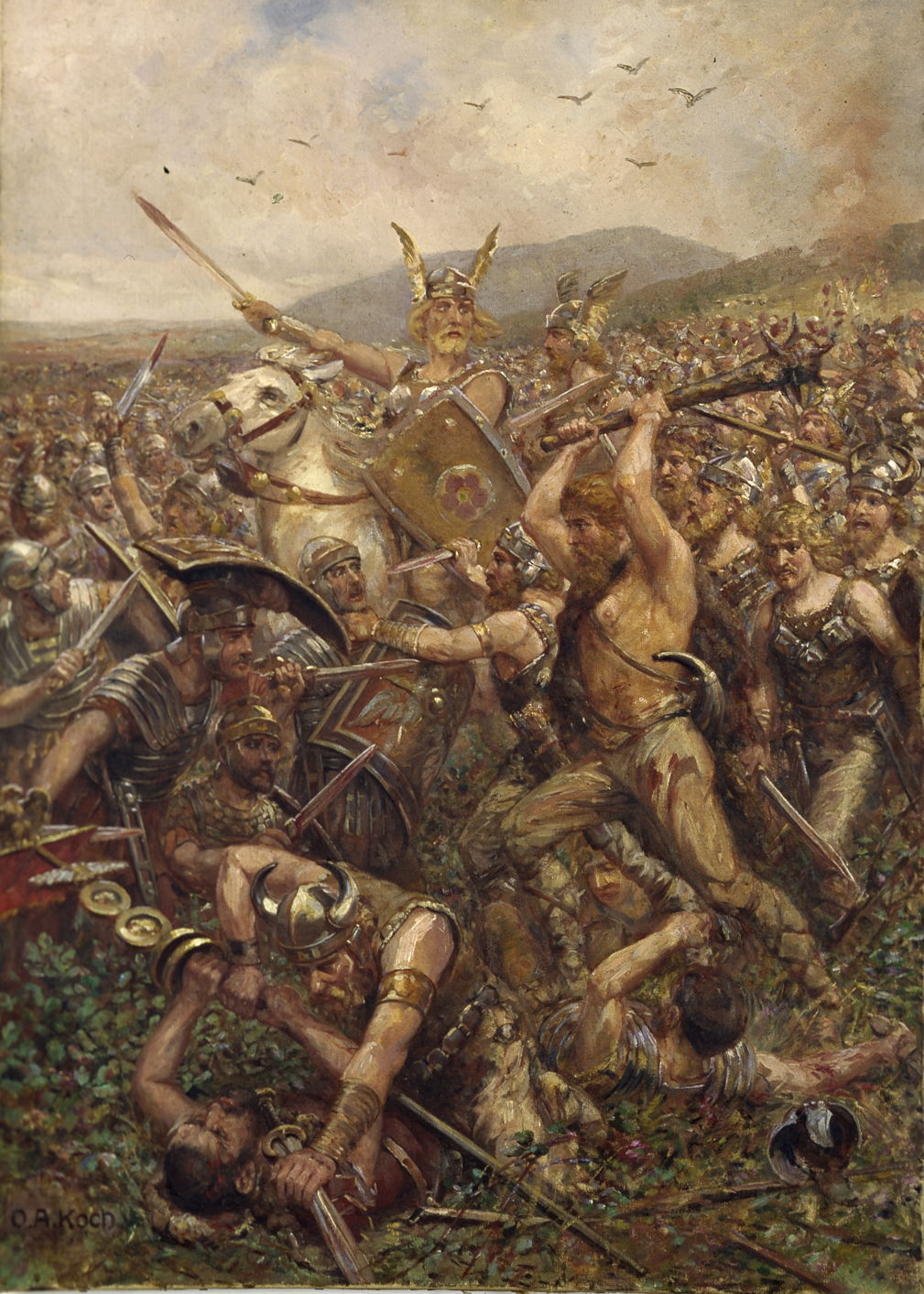 The reign of Augustus is taken as the start the Pax Romana (Roman Peace), but it was only peaceful if you ignored its wars and some bloody murders.

The most disastrous battle, against Germanic tribes led by Arminius, took place in the Teutoburg Forest near what’s now Bielefeld, at the northern edge of the central uplands, on the border between Lower Saxony and North Rhine-Westphalia. At the time, the battle was a military disaster for the Romans, and a singular triumph for the Germanic tribes. But it was also one of the key events leading to what we now know as Europe.

It was recorded in detail by the Roman historians Tacitus (c 56-120 CE) and Cassius Dio (155-235 CE), became forgotten in time, and interest in it wasn’t revived until the Renaissance. Amazingly, the site of the battle was only rediscovered in 1987, and excavated from 1989.

Almost at the opposite end of Germany from the site of the battle is the monumental hall of Walhalla, commissioned as a memorial to the great figures of German history. On its north side is this pediment frieze showing the victory of Arminius and the Germanic tribes at the Battle of Teutoburg Forest. Since its inauguration, the monument has been a focal point of nationalism. Most recently, though, pride of place has been given to those who opposed the Nazis, including a bust of Sophie Scholl, a student who was executed in 1943 for her non-violent opposition to Hitler’s regime.

The Battle of Teutoburg Forest and its hero Arminius have been painted occasionally, most recently in a German nationalist context. Arminius’ name was abbreviated to Armin, and mistranslated as Hermann; he is sometimes therefore known humorously as Hermann the German.

Johann Heinrich Tischbein, the Elder or Kasseler Tischbein, appears to have initiated this nationalist theme, in his Hermann’s Triumph after Victory over Varus (1758). This show’s Arminius’ Germanic tribesmen gathering after the defeat of the Romans, at the edge of the forest. A rather effeminate and pudgy Arminius stands, displaying the armour and distinctive red toga of the dead Roman leader, Publius Quinctilius Varus.

To the right, tribesmen carry the captured ‘eagles’ of the three Roman legions which were wiped out in the battle, and others sort through captured booty.

The reality was a slaughter which would have shocked even Goya. Surviving Roman soldiers were mutilated, executed, and some apparently cooked in large pots; others were taken into captivity. One group of Roman prisoners was not liberated until Publius Pomponius Secundus attacked bands of Chatti forty years later. At least half of the Roman forces of 20,000-36,000 were killed, and the Romans were unable to bury those dead for six years.

When the Roman emperor Augustus heard of the catastrophic defeat, he is recorded as shouting repeatedly Quinctilius Varus, give me back my legions! while butting his head against the wall. It remains one of the most decisive battles in recorded military history.

Johann Heinrich Wilhelm Tischbein, or Goethe Tischbein, chose to contribute to the new myth which was building, in his painting of Hermann and Thusnelda (1822). This conveniently ignores the little that we know of the couple.

According to Tacitus, Thusnelda was the daughter of a pro-Roman tribal leader, who was abducted and made pregnant by Arminius in about 14 CE, five years after the Battle of Teutoburg Forest. By the following year, she had returned to her father, when she was captured by Roman forces and taken to Rome, where her son Thumelicus eventually became a gladiator.

Karl von Piloty’s vast Thusnelda in the Triumphal Procession of Germanicus (1873) is a more accurate artistic invention. It shows Thusnelda and her young son Thumelicus being paraded past the emperor Tiberius during the triumph celebrating Germanicus’ victory over the tribes in 15 CE; this triumph took place in Rome on 26 May, 17 CE, although Thumelicus would only have been two years old at that time.

Von Piloty appears to have been one of the few prepared to portray the more bitter truth of recorded history, instead of nationalistic myth.

Johannes Gehrts, though, preferred to elaborate the new myth, in his Armin Bids Goodbye to Thusnelda (1884). This is presumably intended to show Arminius leaving the princess on his way to the Battle of Teutoburg Forest in 9 CE, five years before he abducted her. The couple are shown with the blonde hair and fair complexions claimed to be characteristic of Germanic peoples, and could easily have stepped out of a Wagner opera.

Paintings which purport to show the Battle of Teutoburg Forest became similarly rich in stereotypes. Friedrich Gunkel’s Hermann’s Battle (1864) shows Arminius mounted on a white charger, leading his tribesmen from the front. In the middle distance, Roman archers are shown, although accounts report that they were unable to use their bows because the very wet conditions made their sinew strings too slack.

Peter Janssen’s painting of The Victorious Hermann (1870-73) closes in on the hero, again on a white charger, but here without any armour.

Otto Albert Koch’s later painting of Varus’ Battle (1909), which coincided with rising German nationalism prior to the outbreak of the First World War, also seats Arminius on a white charger, which here is the only horse in sight. In the foreground, a Norse fighter, whose helmet bears the horns distinctive of a stereotypical Viking, is wresting one of the Roman eagles from the hands of a dying Roman soldier.

For the Germanic tribes, this resounding victory bought a little respite from the Romans, but did not deter them for long. It brought a more political and diplomatic approach, in which there was progressive Romanisation outside the bounds of the empire. Far more important, and of much greater long term consequence, was the effect on the development of Europe beyond the Roman Empire. The defeat of the Romans in the Battle of Teutoburg Forest enabled Europe to start the processes which transformed the continent from Roman territories to the Europe which we know today. It’s not about some imaginary German nation, but about the whole of northern Europe.

After the death of Augustus in 14 CE, his adopted son (and former son-in-law) Tiberius became emperor, until his death in 37 CE.

Known best for his military achievements, as a ruler Tiberius was dark, reclusive, and sombre. Following the death of his son, he left Rome in the hands of two prefects known for being unscrupulous.

The histories of Tacitus claim that the Roman crowd rejoiced when they heard of his death, and again at the suggestion that he had been smothered by Caligula (who succeeded him) and one of his prefects. On his death, the Senate refused to grant him divine honours which were traditionally awarded to dead emperors, and mobs called for his body to be unceremoniously dumped in the River Tiber.

The implication seems to be that Caligula/Macro is helping Tiberius on his way, but the body language is confused. Laurens’ timing seems slightly early too, in that it does not give any clear indication of whether Caligula/Macro is about to murder Tiberius. This may, of course, have been deliberate, as a means of suggesting the possibility but not confirming it.

Caligula succeeded Tiberius as emperor; he was the great-grandson of Augustus, but was murdered in 41 CE for his uncle, Claudius, to succeed him.

Valeria Messalina (c 17/20-48 CE) married Claudius. She was powerful, influential, and had a reputation for insatiable promiscuity, although the latter may have been invented or exaggerated for political purposes. In 48 CE, there was an unsuccessful plot against Claudius, and Messalina was, rightly or wrongly, accused of conspiracy. She was executed forthwith.

In his painting of The Death of Messalina (1916), Georges Rochegrosse chooses the instant before her death, and shows a leader of the Praetorian Guard about to kill her with his sword. She is dressed in bright scarlet, in accordance with her reputation, and tries to push him away with her left hand. At the left, her maid stands, facing away from the scene, her face buried in her hands. A couple of other women of the court are seen in the background at the left edge, looking on in horror.

Behind the imminent execution, Claudius stands, his hands on his hips, smiling wrily at the killing, with the ranks of the guard stood close behind. The immediate foreground has beautiful red flowers, echoing the bloodshed.

More curious is Gustave Moreau’s interest in painting this sordid tale, here in a watercolour study from 1874 which is sometimes claimed to show the execution of Messalina. It doesn’t.

In 1870, Fernand Lematte (1850-1929) had won the Prix de Rome with his painting of The Death of Messalina (1870), and her life and death became a source of motifs for artists in the last decades of the nineteenth century. It seems probable that Lematte’s successful painting inspired Moreau to show her life rather than its bloody end, although this study doesn’t seem to offer much promise of success.

Indeed, when he started to paint a version in oils, Messalina (1874), he seems to have recognised the problems, and quickly abandoned it.

Unfortunately for the Roman Empire, it was figures like Claudius and Messalina who came to be both its making and eventual unmaking.