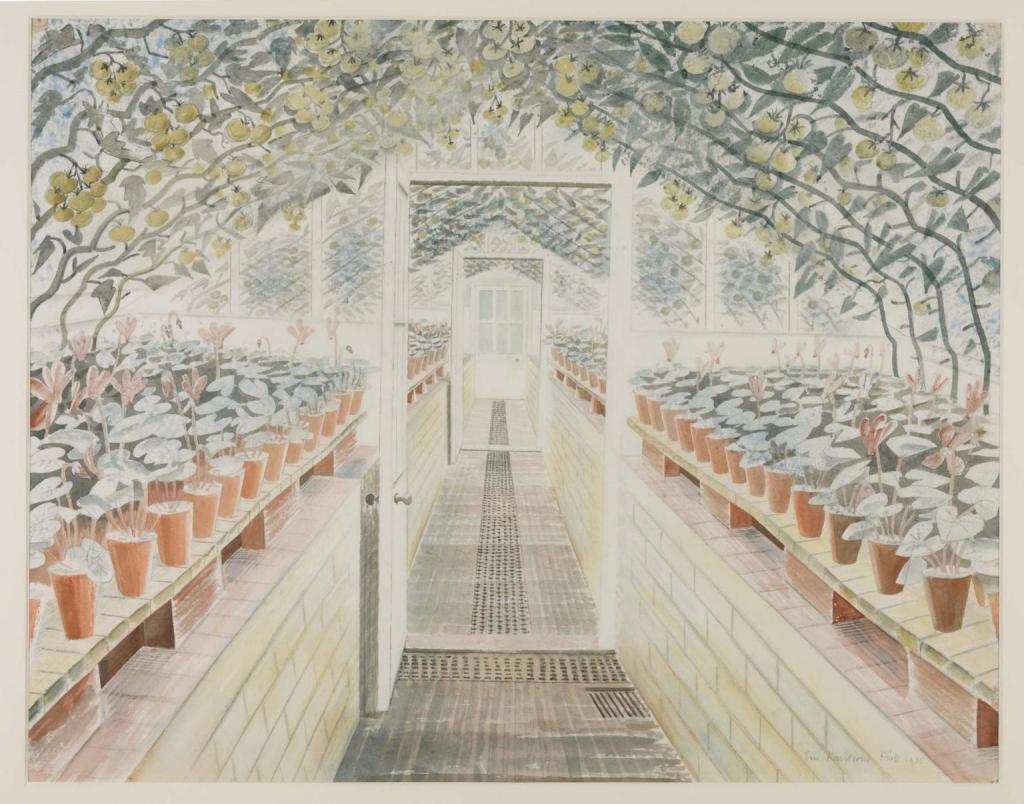 It’s very unusual for a war artist to die in the conflict that they’re covering, but that’s what happened to the British artist Eric Ravilious (1903–1942): on 2 September 1942, he flew in one of three aircraft on a search and rescue mission and never returned. He was only thirty-nine.

Until relatively recently, Ravilious was almost unheard of even in the UK. His design and publishing work was once popular, but he saw himself primarily as a painter. In this and tomorrow’s articles I show a small selection of his paintings which I hope will introduce you to his quietly wonderful art.

He admitted to two major influences in his work: the slightly eery landscapes of Samuel Palmer (1805–1881), whose work was in turn influenced by William Blake, and Paul Nash (1892–1946), who taught Ravilious and has both stylistic and thematic similarity.

Samuel Palmer’s Harvest Moon (c 1833) was one of the works he painted at Shoreham, and shows a team of mainly women cutting corn by moonlight, stacking the sheaves on the wagon seen at the right. Its soft light, night sky, and rich golds and greens create a strong feeling of enchantment and eternity, feelings engendered by some of Ravilious’ paintings.

In 1924 and 1925, Paul Nash taught part-time at the Royal College of Art in London. Among his students there were Eric Ravilious and Edward Bawden, who were both greatly influenced by Nash’s work. He enjoyed some commercial success in his exhibition at the Leicester Galleries in London, which generated sufficient income for the Nashes to overwinter on the Mediterranean coast of France, and visit Florence and Pisa.

Ravilious was born in Acton, London, and brought up in Eastbourne, Sussex, on the Channel coast, where his parents ran an antique shop. After studying at the local school of art, he went on to the Design School at the Royal College of Art in 1922, where he was later to be taught by Nash.

Coincidentally, when Nash was visiting Florence, Ravilious was also in Italy, in Florence, Siena and Tuscany, thanks to a travelling scholarship. Ravilious had learned wood engraving from Nash, and Woodland outside Florence (1925) is a fine example of Ravilious’ early prints. Its trees are strongly reminiscent of those seen in Renaissance paintings, including Botticelli’s Primavera from about 1482.

In 1928, Ravilious’ major work was a series of large murals, which were sadly destroyed in bombing in 1941. At some time he travelled to the Welsh border, where he painted this Wet Afternoon with View of the Church of St Mary, Capel-y-ffin, Powys (1928). This tiny village is about eight miles from Hay-on-Wye. The lone figure walking between high hedges is thought to be the artist.

In 1930, Ravilious married ‘Tirzah’ Garwood, an artist and engraver whom he had first met when he was teaching at Eastbourne College of Art in 1925. The couple moved to Hammersmith in London, where they remained until 1932.

River Thames, Chiswick Eyot (1933) shows influence in its style from Paul Nash. This is an uninhabited island in the River Thames to the west of London, seen here on a quiet winter’s day, with a single figure.

After their stint in London, Ravilious and his wife lodged with their friend Edward Bawden in Great Bardfield, in north Essex, until the Raviliouses bought their own house in Castle Hedingham, which isn’t too far away.

Two Women in a Garden (1933) shows Charlotte Bawden reading under a tree, while Tirzah Ravilious is shelling peas, in the garden of the Bawdens’ house in Great Bardfield.

In November that year, Ravilious had his first solo exhibition at the Zwemmer Gallery in London, which proved very successful with over half his watercolours sold. He had also been busy making woodcut illustrations for books and other publications. If you have ever seen Wisden Cricketers’ Almanack, the definitive annual publication on cricket, every edition since 1938 has featured his woodcut of the game in Victorian times on its front cover.

During the 1930s, he learned lithography, producing a set of lithographs of shops for a popular (and now collectable) book titled High Street, with author J M Richards. He also gained a commission from the Wedgwood pottery for ceramic designs, including coronation mugs. Some of these remained in production for twenty years.

During the 1930s, the Raviliouses started to spend time in Sussex, where they became close friends with Peggy Angus, whose house The Furlongs at Beddingham, East Sussex, became a second home. Eric Ravilious became particularly fond of painting the chalk downs there, as in his Windmill (1934). This isn’t a windmill in the classical sense, but a smaller wind-driven pump to extract water from the chalk, mainly for irrigation.

Ravilious also painted some greenhouse and garden scenes in the nearby village of Firle, including The Greenhouse: Cyclamen and Tomatoes (1935). Firle has a little-known place in gardening history, as the garden where the first greengage (a cultivar of plum) was grown outside its native Iran, in the Market Garden of Firle Place, the estate of Sir William Gage, who gave his name to the fruit.

Like some of his other mature works, this explores three-dimensional visual effects and perspective projection, making the succession of greenhouses look almost infinite.

The Vicarage, Castle Hedingham, Essex (1935) was painted back in north Essex, apparently following a light dusting of snow in the winter. The white weatherboarding on the upper storey of the building at the left is typical of the area vernacular style.

Village Street, Castle Hedingham, Essex (1936) is another view of the village, this time in wet conditions, with two cyclists and a pedestrian – a heavily-populated painting for Ravilious.

For Caravans (1936), Ravilious is back to stay with Peggy Angus in The Furlongs in Sussex, in the late autumn. These old-fashioned caravans were apparently owned by the Raviliouses, and appear to have been intended to be drawn by horses.

The Lifeboat (1938) appears to have been painted on the south coast, and shows one of the many beach-launched lifeboats operated by the Royal National Lifeboat Institution.

During the late 1930s, Ravilious took an ardent anti-fascist stance, and supported Artists Against Fascism. His friends dissuaded him from joining the army, but he remained determined to play his part, as I’ll describe in tomorrow’s concluding article.

There are now several excellent books in print showing his work too.