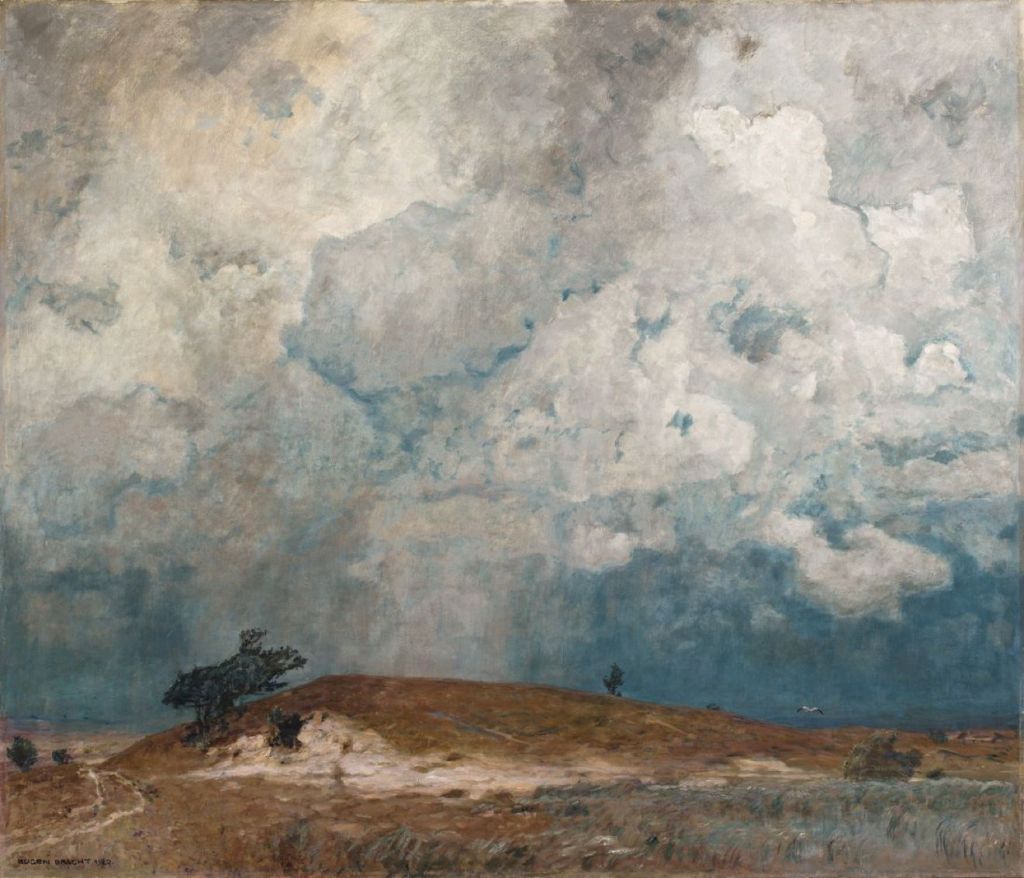 It’s only when you look through hundreds of Impressionist and Naturalist paintings – the movements which dominated European painting in the latter half of the nineteenth century – that you realise how high most of their horizons are. Despite a strong culture of painting in oils outdoors, and the general availability of oil paint in tubes, skying seems to have become much less popular after about 1850.

It’s also easy to mistake the rough facture and overall sketchiness of many of the paintings made by Impressionists as indications that their finished works were no more than the sort of sketches of clouds that John Constable made on Hampstead Heath. Skies weren’t a strong part of the mainstream Impressionist agenda, though, with limited scope for intensified chroma and lightness, leaving them to be relegated to backgrounds. As a result, the most prolific of the Impressionist sky painters were those at the edge of the movement.

In May 1864, Frédéric Bazille and Claude Monet had travelled to the Channel coast, to Le Havre. This was Monet’s home ground, but the first time that Bazille had explored this area. Bazille then painted The Beach at Sainte-Adresse a year later, in May 1865, as one of a pair of paintings for an uncle.

As his style was starting to change from his early realism, Monet painted an almost identical view in The Beach at Sainte-Adresse (1867), but with a very different sky.

Moonlight on the Banks of the Oise (1867) is one of his nocturnes which did survive, and was one of his paintings shown in the First Impressionist Exhibition.

His undated Dieppe Beach is a delightful Impressionist rendering of a beach off-season, with a sky which even Boudin would be proud of.

Also undated, Bureau’s The Road has a vivid sky, although its landscape is perhaps older in style.

Of the core French Impressionists, it was Alfred Sisley who painted the most skyscapes.

Molesey Weir, Hampton Court (1874) shows a weir on the River Thames, and presents an excellent collection of different surface effects of water accomplished by the combination of colour and brushwork. Its horizon is unusually low, and the sky scrubbed in.

Sisley’s long series of paintings of and around the Loing Canal during the 1880s includes most of his finest skies.

This view of The Loing Canal from 1884 is a fine example from near Saint-Mammès. Much of the canvas is occupied by the sky, which Sisley wrote that he always painted first so as to set the scene and mood for the whole painting.

The Canal du Loing, here seen in 1885, also features a low horizon with an expanse of blue sky above.

The Bridge at Moret, Morning Effect from 1891 looks at most of the span of the bridge from the bank of the river, adjacent to a stand of poplars. Sisley maintains his emphasis on the sky, which occupies most of the canvas and once again sets the time and mood.

Camille Pissarro tended to dissect his skies with trees, or set the horizon higher than Sisley. Where he allowed the sky to get the upper hand, though, his skying could be superb.

Among six paintings which Pissarro started work on when he was in England in 1890 was this view of Charing Cross Bridge, London from Waterloo Bridge. For this he made a sketch in front of the motif, then following his return to his studio in Éragny he painted this in oils. This shows the River Thames in central London, looking south-west, with the skyline broken by the Palace of Westminster and the tower of Big Ben.

A few of his extensive series of landscapes painted around Bazincourt feature rich skies, here View of Bazincourt, Sunset from 1892.

Impressionists outside France were sometimes more enthusiastic about skies. For example, Fritz Overbeck’s On the Moor from about 1904 is a view of Teufelsmoor under an intense sky, following rain.

My final Impressionist paintings were made by Eugen Bracht, who seems to have had a career-long enthusiasm for skying.

This longstanding fascination with clouds is reflected in his Evening Clouds from 1911, which is gently Impressionist.

Bracht’s Stormy Day from 1920 is another fine example of his Impressionist skying, with a large bird, possibly a heron, in flight over the inky grey clouds near the horizon.

If many Impressionists were reticent about allowing the sky to dominate in their paintings, attitudes changed among Post-Impressionists, which I’ll look at next week.