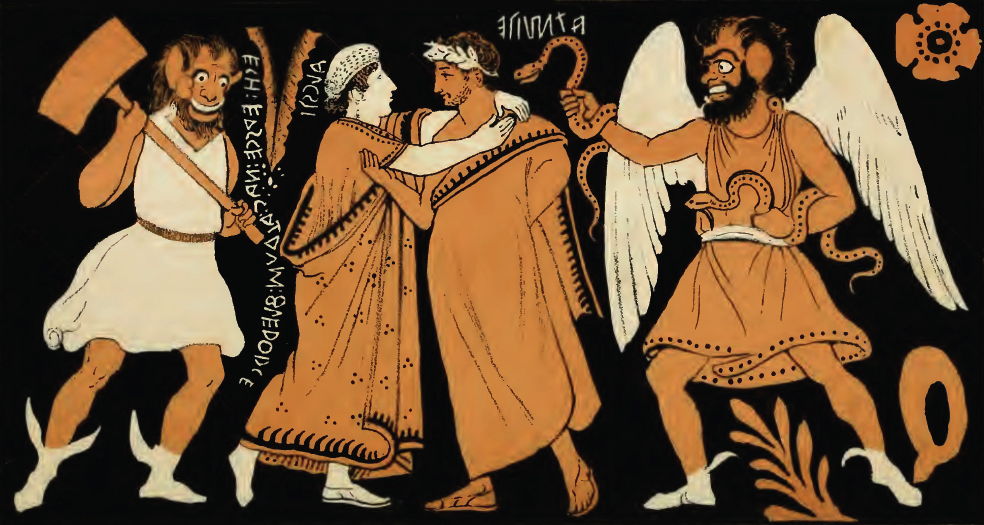 If the origin of Rome and the Romans is rather murky, that of the Etruscans is a total mystery.

Around 800 BCE, the time of the origin of Greek mythology, and the start of the formation of Rome, when that pot bearing Greek letters entered the ground near Rome, the Etruscans (Latin Tusci) formed as a civilisation in the Italian region known after them as Tuscany. This was around five hundred years after the supposed fall of Troy.

Among several proposals for the origin of the Etruscans, it has been suggested that they may have viewed themselves as descendents of the survivors of Troy, and there has been some genetic evidence to support that, and some to contradict it too. There is no doubt that, at the time that they constructed the tombs by which they are now known, these Etruscans were greatly influenced by Greek civilisation, and had earlier been resisting the rise of Rome.

However, the popular idea that the Romans obliterated the Etruscans in a wave of genocide is incorrect: from two centuries before many of their tombs were built, the Etruscans had been steadily integrating with the Romans, and were assimilated (often in positions of power and influence) rather than exterminated.

The tombs of the Etruscans are decorated by wonderful paintings, some of the earliest great treasures of European art. Their content, though, is often strikingly unusual if not downright disturbing, not the sort of thing you’d expect in a family tomb.

The Liberation of Caelius Vibenna (c 340 BCE) shows a captive being freed at the left, then a series of quite gruesome killings.

The first step in discovering what these paintings are about, and how they come to be there, is to identify the figures shown, and the actions taking place. This is difficult for Etruscan art, because, unlike the Greeks and Romans, they left virtually no written texts which might help us, and almost all that we know about them has come from the study of their tombs and grave-goods.

This reads from left to right as:

Note that each Etruscan hero is carefully made to look the same, with the same brown hair and beard, to aid identification.

During the troubled years prior to Macstrna/Mastarna becoming King of Rome, some Etruscans allied themselves with Rome. The killings shown here were part of a surprise attack by loyal Etruscan warriors on those allies of Rome, which the heroes inevitably won. This painting is therefore a celebration of that victory as an achievement of loyal Etruscans some two centuries previously.

Those who fancied even more gore could peek around the corner into the vestibule of the tomb, where there is a painting of Marce Camitlnas thrusting his sword into a subjugate Cneve Tarchunies Rumach, better known as Gnaeus Tarquinius, a Roman who may have been involved in the capture of the brothers Caile and Aule Vipinas (Caelius and Aulus Vibenna).

These paintings appeared on one side of the tomb; the other side contained the far older Greek narrative of the sacrifice of the Trojan prisoners, a more sophisticated painting which was almost certainly copied in part from a Greek original. Other similar images have been found in Italy, such as the Revil Cista shown further below.

Reading this from the left, we have:

To understand these, we must go back to the legend of the Fall of Troy.

Troy was a legendary (and probably historical) city which ruled over a substantial area of the west of what is now Turkey. Designed to be impregnable, it had accumulated considerable riches when the early Greek civilisation was becoming established. Following the (ill) Judgement of Paris, the winner Aphrodite had promised the Prince of Troy the hand of the most beautiful woman in the world, Helen, who happened to be married to the King of Sparta, Menelaus. Aphrodite then helped Paris seduce and abduct Helen back to Troy.

When Helen was being courted, her unsuccessful suitors formed a pact to return her to Sparta in the event that anyone dared try to seduce her, and Agamemnon, King of the Mycenaeans and brother of Menelaus (so brother-in-law of Helen) raised a fleet of more than a thousand ships (“was this the face that launched a thousand ships?”) and a great army to attack Troy.

For ten years, the Mycenaeans (Greeks) and their allies laid siege to Troy, during which many of their heroes were killed in battle. The war was not just long, but very bitter, and the warriors became vengeful, and both sides committed atrocities. At the end of this period Odysseus (Ulysses) had the idea of building a wooden horse, into which Greek soldiers would be placed, in order to get them into the city: the Trojan horse.

The Greeks landed this horse on the shore, and sailed off, apparently leaving it as a peace offering. In fact they sailed only just out of sight, and waited.

The Trojans hauled the horse up and into the city, dismantling some of their defences to get it through the walls. They then went and drank and feasted what they had presumed to be their victory.

While the Trojans were busy getting drunk, the Greek soldiers inside the horse let themselves out through a trapdoor, lit signal bonfires to summon the Greek ships, and opened up the rest of Troy’s defences. The Greek army poured into the city as its inhabitants were still recovering from their partying. The city was sacked: all the precious metals and jewels were stripped, the temples desecrated, most of its population murdered, and the buildings were set alight.

Some prisoners were taken. Andromache, widow of the great Trojan warrior Hector, was given to Neoptolemus, and Hecuba, Priam’s widow, to Odysseus. Astyanax, infant son of Hector and Andromache, was killed by being thrown from the city’s walls.

The dominant aim was to completely destroy the city of Troy and its lands, and to kill almost all of its people. It was calculated genocide.

(It is commonly supposed that the legend of Troy is told in Homer’s epic Iliad. In fact, that covers only a small fraction of the whole, and does not, for example, even mention the Trojan horse. However the overall legend remains deeply embedded in much of European culture – even in our language, and in computer security.)

If this scene makes a direct literary reference, it is to Book 21 of the Iliad:
[Achilles] drew twelve youths alive out of the water, to sacrifice in revenge for Patroklos son of Menoitios. He drew them out like dazed fawns, bound their hands behind them with the belts of their own shirts, and gave them over to his men to take back to the ships.

There are two halves or faces to this ancient tomb: the Etruscan, celebrating heroes who fought against allies of Rome, and the Greek/Trojan, recording the Greek sacrifice of Trojan captives. The story behind the paintings as a whole thus depends on whether the Etruscans thought themselves to be Trojan, or Greek.

If they thought themselves to be Trojan, one explanation is that the paintings told the story of their survival against the odds, the few who escaped the genocide, and the heroes who resisted against Rome.

If they thought themselves to be Greek (or Greek sympathisers), they could be paying respect to the Greek warriors who ensured the destruction of Troy, just as their own local heroes had stood up and fought against Roman allies.

It all depends on where the Etruscans of that time thought that they had come from. Moreover, we don’t know who these paintings were made for, but they were certainly never intended to be seen by the likes of you and I.

You may also be surprised to see a winged angel of death in the paintings. Vanth, that goddess of death, is one of the more common figures shown in Etruscan tombs.

Vanth and Charun have been identified as the Etruscan deities associated with death. They are often seen as a couple, accompanying those who have just died, or are about to die. They certainly had their work cut out as Achilles carved his way through the necks of Trojan captives.

The Farewell of Admetus and Alcestis (c 325 BCE) is an Etruscan vase painting of the Greek myth of Admetos, the King of Pherae, and his wife Alcestis, described in several sources, including Euripides’ play Alcestis. When Admetos’ fated day of death came, Apollo intervened to help him – according to Aeschylus, by making the Fates drunk, so that they agreed to reprieve him from death if he could find a substitute. His wife Alcestis substituted for him.

In this painting, Alcestis is shown making her farewells to her husband, as two versions of Charun (Etruscan, not Greek!) await their victim. Charun on the left wields his trademark hammer, while Charun on the right holds his characteristic snakes, but seems to have borrowed Vanth’s wings.

In Euripides’ version, as Alcestis is being taken to the underworld, Admetos decides that he does not wish to live. Heracles intervenes and Alcestis’ life is saved. Being a Greek, Euripides has Alcestis being taken down by Thanatos, the Greek (and male) version of the Etruscan Vanth, complete with wings.

This wall painting from the Tomb of the Charuns (or Demons) shows a typical appearance of Vanth (left) and Charun (right), either side of a door in an Etruscan tomb, although here the door itself is painted rather than an opening. It is also interesting to note that Vanth appears to have a halo above her head, although given the condition of this painting it is far from certain (and unusual too).

Returning to the original scene of Achilles killing Trojans, the version of Charun shown there is fairly typical, but not stereotypical, in that he does not have snakes with him there. His distinctive hammer or mallet is used to open the bolt on doors, particularly that to the underworld, it would appear.

This painted krater was also found in the François Tomb, and shows Charun alone, without a partner Vanth.

Vanth is by no means the only Etruscan deity to come with wings attached, although she is probably the most consistently winged. In this wall painting of Typhon, from much later, around 150 BCE when the Etruscans had been assimilated into the Roman Empire, the Greek monster Typhon has acquired wings in his Etruscan form.

Although we commonly consider Roman deities to be direct descendants of their Greek equivalents, in many cases the Roman deities were more influenced by Etruscan ancestors, who also may have been the origin of their Roman name.