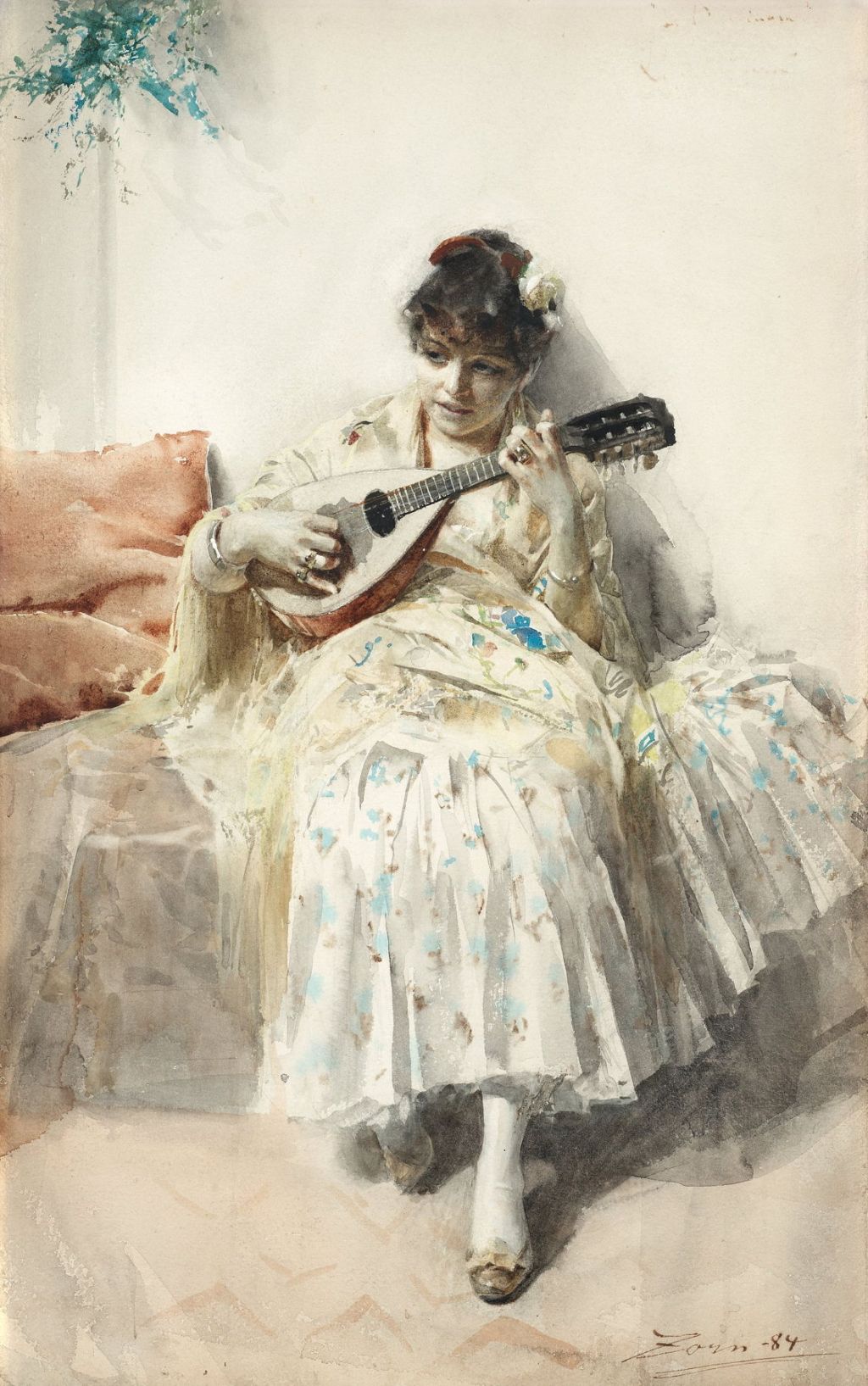 Sometimes getting a clear answer to a simple question involves a trip through the history of painting. When writing last week’s article about the paintings of Anders Zorn, I noticed that one of them purportedly showed a Girl Playing a Mandolin. But is the instrument she is playing a mandolin, a plain lute, or another from the lute family?

After consulting various authorities, including Wikipedia’s excellent article, I was really none the wiser. Mandolins didn’t really emerge from the lute family until the eighteenth century, and apparently disappeared again after the Napoleonic Wars. I don’t know whether Napoleon was in any way responsible, but mandolins didn’t become popular until well into the nineteenth century.

Armed with that information, I was able to identify the string instruments in Gerard van Honthorst’s merry Concert on a Balcony from 1624 as lutes, which was a start. In fact, the lute here is on the right; the lute-like instrument on the left looks like a theorbo or one of its relatives, also members of the lute family.

The mandolin became really popular following the Paris Exposition Universelle of 1878, it seems. On that basis, I should be suspicious of any painting purporting to show a mandolin any earlier than that.

Sure enough, here’s Mary Cassatt’s early and successful painting of The Mandolin Player, which was one of the first two works by American women artists to be accepted for the Salon, in 1868. The instrument shown is small for a lute, and appears to have eight metal strings, but they’re not arrayed in pairs. On balance, I suspect that the title is accurate, and this is a mandolin.

As for Camille Corot’s Gypsy Girl with Mandolin from about 1870, it too was painted well before the Exposition, but shows a small member of the lute family which could well be a mandolin. Its unusual headstock seems quite distinctive, but doesn’t help identification, and Corot’s painterly brushwork obscures the detail of its strings.

I don’t have a date for Valentine Cameron Prinsep’s Mandolin Player, which may well have been painted after the Exposition. Although this does look like a genuine mandolin, without a clear view of its strings it might still be a lute.

The first painting clearly dated after the Exposition is Paul Gauguin’s Study of a Nude (Suzanne Sewing) from 1880. Hanging from the inside of the window behind her is an instrument which could well be a mandolin. This is a puzzling painting: the model is undeniably sewing, with a thimble on the middle finger of her right hand, so why is she not clothed? It is perhaps understandable that the artist’s wife is recorded as refusing to allow it to be hung on the wall of their home.

So we come at last to Anders Zorn’s marvellous watercolour of a Girl Playing a Mandolin, most probably painted when Zorn visited Madrid in 1884, well after the Exposition in which the mandolin apparently took Europe by storm. The instrument shown is a traditional bowlback mandolin, which has four doubled string runs, here seemingly strung in metal. That’s good enough for me.

My last painting for today shows a more unusual instrument: in Pompeo Massani’s The Orchestra Rehearsal from around 1900, the woman in the left foreground is holding another instrument from the mandolin family: this appears to me to be the rare piccolo or sopranino mandolin, which is to the mandolin what a piccolo violin is to the violin family.

At this point I stand back and wait for someone who knows what they’re talking about to shoot me down in flames.