If you have many items in a folder, navigating them in the Finder can get time-consuming. Recent versions of macOS have added an option to organise the contents of Finder’s windows not just as continuous arrays, but in groups of items. This is combined with sorting controls in the Sort tool, and set by the Use Groups command in the View menu. This article explores its features, with particular regard to the grouping of apps.

Using Groups does what it says: depending on which type of Finder window (Icons, List, Columns or Gallery), items are sorted first into groups, then sorted within each group according to the sort order set for that window. Group options are essentially the same as those for sorting, with one significant addition, Application. That groups items according to the default app set to open each type of document or other item.

Whether you find grouping an advantage over its equivalent sort order is a matter of personal preference. In windows showing the results of Find, they can be advantageous in handling pooled items from many different locations. However, there’s one adverse interaction which can at first seem annoying: grouping is performed in a fixed order of groups which may not match the selected sort order within each group.

In this, for instance, if you group by size (fixed with largest at the top) but then sort in the opposite size order (from smallest to largest), the order of items shown is less than helpful. Similarly, grouping by size but sorting by name can be disorientating until you realise what you’ve done. 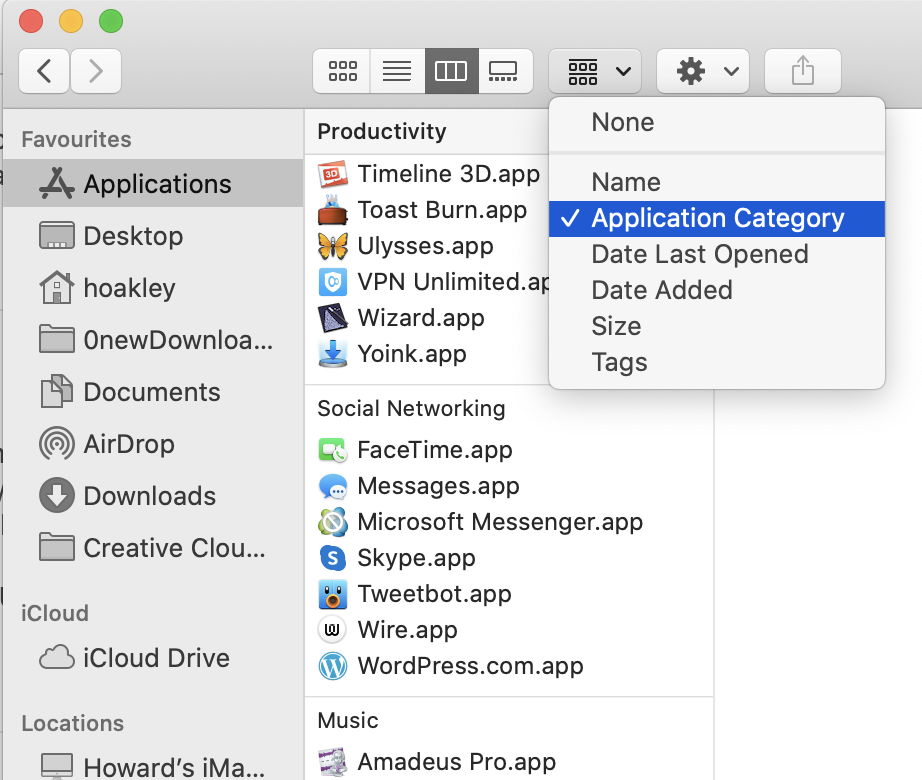 There are two problems with using Application Categories: many apps don’t have an assigned category, and are lumped together in Other, and the list of categories can’t be customised at all. Together they greatly limit its usefulness, to the point where many users will find grouping their apps pointless.

An app’s Application Category is baked into the app’s Info.plist by its developer. It’s set in the LSApplicationCategoryType key, which has a string value containing a UTI to a defined category, such as public.app-category.utilities, which assigns that app to the rambling Utilities category. Although this value is a string and could in theory contain a custom category, by using UTIs here Apple has limited the possibilities to those for which it has assigned UTIs. If a developer uses their own UTI such as public.app-category.disk-utilities, macOS doesn’t recognise it.

Apple’s fixed set of categories is based on those used in its App Store, and represents its commercial interests there. For example, there are 19 sub-categories of Games, but none of Productivity or Utilities. Each app can only be assigned to one category: Apple’s spreadsheet Numbers appears in Productivity (a word which only seems to have meaning to marketing departments), not in Business (which is surely also Productivity) or Finance. These problems are bad enough in the App Store; in Finder app groups they limit its usefulness.

An app’s Application Category is neither shown to the user, for instance in Finder’s Get Info dialog, nor does a user have any control over it. A great many apps supplied outside the App Store have no value assigned to the LSApplicationCategoryType key in their Info.plist. Unless you sell your app in the App Store, there seems little point and no incentive to set that key.

A user can edit the Info.plist of many of those apps which don’t set a value for this key. But doing so breaks that app’s signature, and sooner or later macOS will decide that it won’t open that app because of that. In the case of Catalina, that refusal is likely to happen sooner, requiring you to replace the copy of that app if you ever want to use it again.

Grouping apps by Application Category is therefore only going to be of much value if the great majority of your apps have been obtained through the App Store, and their individual categories are appropriate. If you develop apps, then you should set their LSApplicationCategoryType key to assist those users who are trying to make use of categories. If there are any who haven’t become disillusioned with this missed opportunity.

Thanks to Áron for asking about this in the first place.