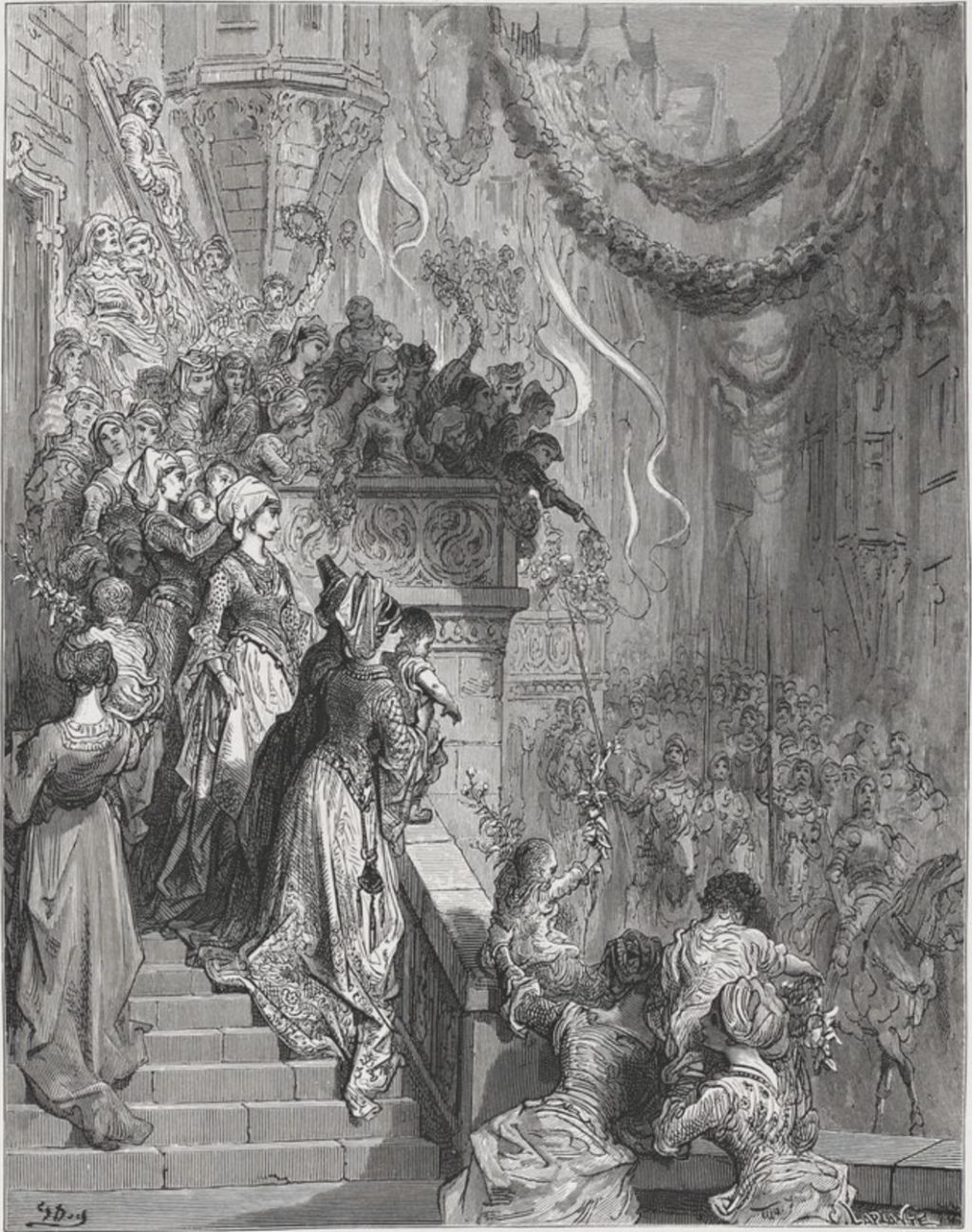 Rinaldo has raced down the length of Italy and caught a ship to take him to the island of Lampedusa. He arrives there just as Orlando and Oliver have won their victory, and Agramante and Gradasso lie dead. When he sees the mutilated body of Brandimarte lying on the ground, Rinaldo cries. The bodies of the Saracens are then taken to Biserta, where they’re hidden away.

The night before Brandimarte’s death in combat, his wife Fiordiligi had dreamed of the surcoat she made for her husband being covered with crimson spots which she had sewn there.

Orlando and Sansonetto break the news to her. She collapses with shock, then tears her cheeks and hair in anguish. She cries out to her husband, telling him that she could have saved him if only she’d been there.

Meanwhile Orlando and his brother Oliver start arranging Brandimarte’s burial. There, the Count laments the loss of his friend and comrade, praising him as the greatest champion of the church and empire. The coffin is then raised and carried at the head of a great procession to the cathedral, where he is laid to rest. Between them, Orlando and Fiordiligi order marble and stone for his sepulchre. Fiordiligi stays by his tomb night and day, rejecting the offer of a place in the convent of her choice, and dies shortly afterwards.

Oliver’s crushed foot is in bad need of medical attention. On the recommendation of the pilot of their ship, Orlando decides to take his brother to a hermit who lives on a lonely rock near Sicily – the same who had recently baptised Ruggiero after his shipwreck. The hermit gives his blessing, and Oliver’s foot is miraculously healed. They have also taken with them the badly wounded King Sobrino, who confesses, converts to Christianity and is baptised. They then discover Ruggiero, who is hardly recognisable as he has been living rough with the hermit.

Rinaldo has particular affection and respect for Ruggiero, having met him in combat. Ruggiero had rescued Rinaldo’s brother Ricciardetto, and had also freed the sons of Buovo from Saracens. As a result of his baptism, Ruggiero is accepted as Bradamante’s fiancé, although none of them knows that Charlemagne has already approved that his bride-to-be should be married to a young Greek prince. After a couple of days with the hermit, the paladins and knights leave for France, returning to Ruggiero his arms, armour and mount.

In North Africa, Astolfo has released Senapo the Nubian with all the men he had brought for the campaign there. His fleet which had destroyed the ships of the retreating Moors pays off its crews and it reverts to the leaves from which it had been created. As Astolfo thanks Prester John for his help, he gives him the bladder-skin of wind which he had captured earlier.

His duties done in Africa, Astolfo mounts the hippogriff and flies back to Provence, where he releases the animal at last, as had been decreed by Saint John the Evangelist. He arrives in Marseilles at the same time as Orlando and his party are landing. Their news is taken to Charlemagne, who is greatly relieved that most have returned safe and sound, and heads south to welcome the victors with his full court. Ruggiero is presented to him, as are Marfisa and Bradamante.

Charlemagne, his victorious paladins and court then make a triumphal entry into Marseilles, with crowds lining the streets, and great celebration.

Rinaldo later raises the question of his sister Bradamante’s marriage with his father Count Aymon, proposing that she should wed Ruggiero, as he’s still unaware that the Count has already arranged her marriage to Prince Leon. As Ruggiero isn’t a monarch, he has no land or wealth, the Count argues. Rinaldo’s mother rebukes her son even more, but neither will change their mind, and the Duchess tells Bradamante that if she doesn’t comply, she’ll be disowned for ever.

Bradamante is speechless. She would never dare to contradict her mother, but cannot undo her own heart. Rather than say yes or no, she sighs, exits and weeps in private. She wrestles with her impossible dilemma, whether to obey her mother and part from Ruggiero, or to oppose her mother and follow her heart.

Ruggiero is equally distressed, and laments his lack of wealth. He can’t understand how courage and noble deeds are of such little account. He reasons that Leon and his father would be deposed in a year or so, so if the arranged marriage could be postponed, it might never happen. He considers killing Bradamante’s father, but that would hardly help his claim to her hand in marriage. He worries that her parents’ obsession with lands and wealth could corrupt their daughter. As his mind is in turmoil, a maid arrives with a letter from Bradamante. In this she affirms her love for him to death, and reassurance that no one will ever replace him.

Bradamante then goes to Charlemagne and asks a boon of him; he recognises her valour and offers her part of his kingdom should she wish. She instead asks him to require that no man can marry her until he has demonstrated his skill at arms in combat with her, by forcing her to submit. He is happy to grant her that. When her parents hear of this, they’re angry, so take her to Count Aymon’s recently acquired fortress in Rochefort to await despatch to Prince Leon in the Levant.

Ruggiero comes up with a plan in which he expects both Prince Leon and his father to be killed. He dons his arms and armour, and decides to do this incognito wearing a different surcoat, and with only his most trusted esquire. Together they travel east, through Austria, Hungary and on to Belgrade. There they find Leon’s father the Emperor Constantine and his massed army about to take the city of Belgrade back from the occupying Bulgars.

As Ruggiero arrives, battle commences, and Constantine’s Greeks try to cross the river. Leon leads twenty thousand of them around and across the river. Constantine then builds a bridge of boats over the river, and joins his son with the main body of his army. Outnumbered four to one, the Greeks start massacring the Bulgars. Leon claims the life of their king, and the remainder quickly turn and run for their lives.

Ruggiero decides to lead the Bulgars back into battle, and turns their fleeing knights back to face the Greeks. He kills Constantine’s nephew, then slaughters many of their knights. This turns the tide against the Greeks, who are put to rout. Leon withdraws to a hill where he watches his own men dying, and is full of admiration for the knight who turned Bulgar defeat into victory.

Recognising the imminence of disaster, Leon orders his men into full retreat to the other side of the river, and sends a messenger to his father imploring him to do the same. The Bulgars then gather around Ruggiero and show their appreciation of his leadership and valour. As they had lost their king so early in the battle, they quickly call for him to be their leader. But this isn’t part of Ruggiero’s plan, so he makes his excuses and heads off in pursuit of Leon.

Ruggiero looks for somewhere to stay the night, but can’t see any dwellings for miles, so he decides to ride through the night until he reaches a town. At dawn he sees a city, and decides to rest himself and his horse there. The city’s ruler is Ungiardo, a loyal servant of Constantine. After Ruggiero enters his lodgings, another knight arrives; he has also been at the battle of Belgrade, recognises Ruggiero, and quietly sneaks off to tell Ungiardo who’s staying in his city.

Agramante, King of Africa, who is leading the war against Charlemagne in revenge for the killing of his father, Troiano. Non-Christian.

Astolfo, son of the King of England who is abducted by Alcina, turned into a myrtle bush, then released when Alcina’s magic is undone.

Brandimarte, knight and close friend of Orlando, husband of Fiordiligi.

Fiordiligi, daughter of the King of Lizza and wife of Brandimarte, who has gone missing.

Leon, Prince of Greece, the son of Emperor Constantine, with whom Bradamante’s marriage is arranged.

Oliver, Orlando’s brother and almost as effective in combat as him.

Orlando, the hero, Charlemagne’s nephew, a Count, and his most outstanding paladin.

Senapo, Emperor of Ethiopia, also known as Prester John. Although a Christian, punished by blindness and harpies for sins as a young man.

Sobrino, an African king, a ‘pagan’.

Julius Schnorr von Carolsfeld (1794-1872) was a German painter who trained at the Vienna Academy, from where he went to Rome in 1815 to join the Nazarene movement there, with Johann Friedrich Overbeck and others. He was involved in the campaign to re-introduce traditional fresco painting, and in 1822 was commissioned to paint frescoes depicting Ariosto’s Orlando Furioso in the entrance hall to the Villa Massimo in Rome. He completed these by 1827, when he returned to Munich to paint frescoes for the new palace there showing scenes from the Nibelungenlied. He later turned to Biblical illustrations and designs for stained glass windows.