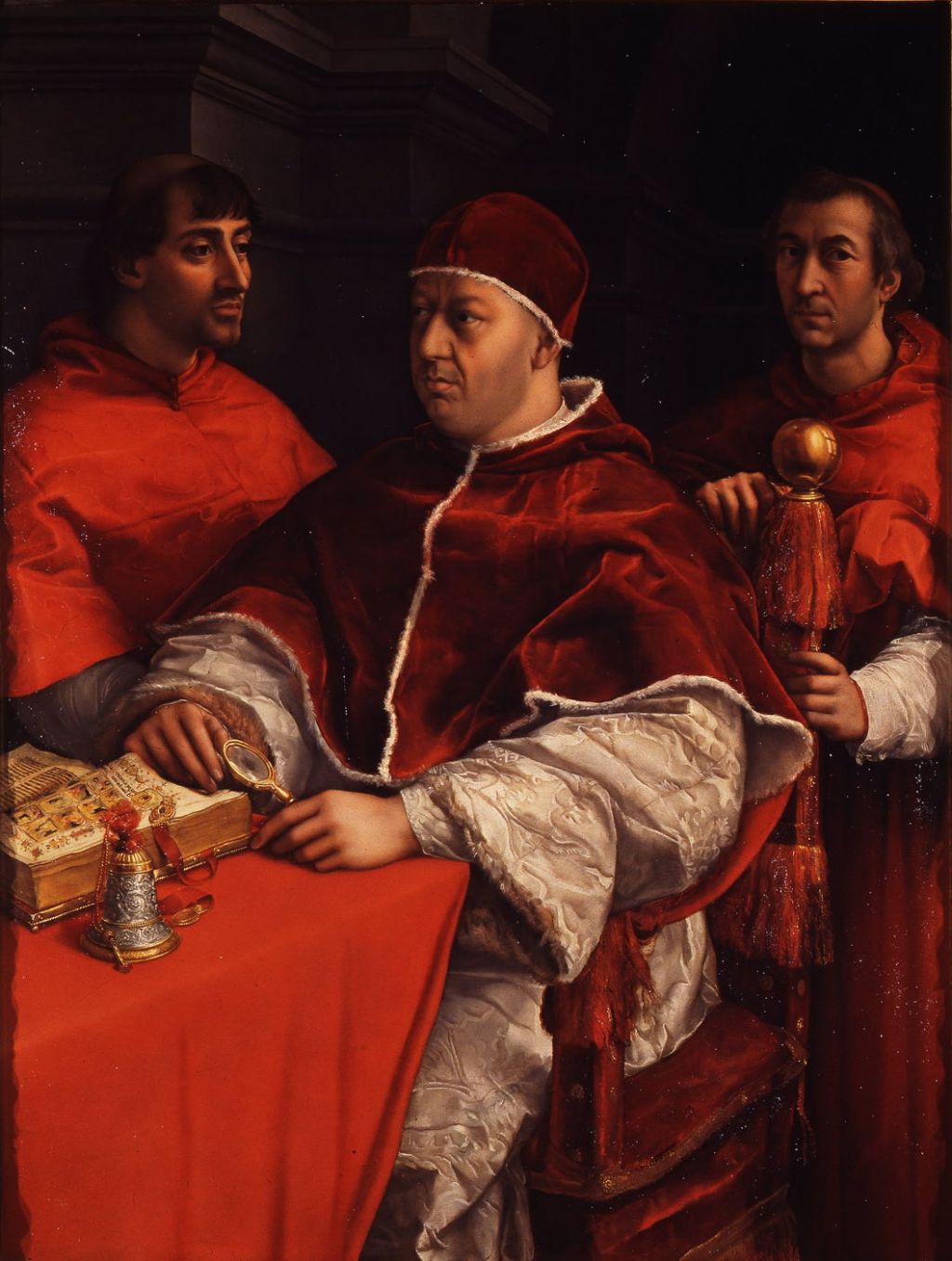 By the mid-1510s, Raphael and his large and skilled workshop were benefiting from major commissions of the new Pope Leo X. Work continued on the frescoes in the stanze, and ten cartoons were being woven into tapestries for the walls of the Sistine Chapel. He was also involved in architectural projects, including the design and decoration of interiors for the Pope and his inner circle. In 1515, Raphael was made Prefect over all antiquities in the city of Rome, and proposed mapping and documenting what remained of the ancient city.

There was also no shortage of commissions for easel paintings: this article looks at a selection produced by Raphael and his team between about 1514 and 1518.

The Ecstasy of Saint Cecilia, probably painted between 1513-14, is another of Raphael’s masterpieces. It was commissioned by Elena Duglioli dall’Olio, a Bolognese lady who wanted it for the altarpiece in her family chapel in the church of S. Giovanni in Monte, Bologna. She was advised by a Bishop who had an uncle who was a cardinal in Rome, who in turn was a close friend of Raphael.

It is probably this painting more than anything else which secured the popularity of Saint Cecilia as the patron saint of music and musicians, and the first records of her association with music festivals and schools date from more than fifty years later.

Raphael’s composition is based on the words of a chant traditionally sung on the day of the saint’s commemoration, which refer to Cecilia singing a prayer to the sound of an organ. She is shown in a state of religious ecstasy holding, rather precariously, an organetto or portable/portative organ. Beside her are, from the left, Saints Paul, John the Evangelist (patron saint of the church for which the painting was destined), Augustine, and Mary Magdalene. At their feet is a collection of musical instruments including a damaged viola da gamba, triangle and tambourine. Thus the overall theme appears to be the heavenly music which is only heard by the most devout.

Christ Carrying the Cross from about 1516 is an unusual treatment of this popular subject, in that Raphael uses an upright or ‘portrait’ orientation. This painting was intended for the church of Santa Maria dello Spasimo in Palermo, Sicily, hence its alternative name of Lo Spasimo di Sicilia. It has been suggested that it may have been commissioned by the Olivetan monks of Palermo as a replacement altarpiece, which could account for its orientation and composition.

As Christ struggles under the burden of his cross, he is comforted by the group of women at the right; the muscular man behind Christ and the cross is Joseph of Arimathaea, who is energetically lifting the load from Christ’s shoulder. There’s a wealth of fine detail in the other figures, stretching deep towards Calvary in the distance, and the letters SPQR appear reversed on the large red flag at the upper left.

The opening chapter of the first book of Ezekiel describes an elaborate vision, in which the prophet drives a battle chariot drawn by four creatures, each of which has four faces, of a man, lion, ox and eagle, and four wings.

Raphael simplified that for his Vision of Ezekiel (1516-17), which was probably painted by his workshop from the master’s design. He settles for the prophet being borne on the back of a large eagle, reminiscent of Jupiter perhaps, with two winged mythical beasts underneath. Within these are symbolic associations with the four Evangelists to come in the future. Portentous events are also shown on the earth below, and the faces of cherubs are embedded in the clouds above.

As Raphael had painted his previous pontifical patron, so some time between 1517-19 he painted this Portrait of Pope Leo X with Cardinals Giulio de’ Medici and Luigi Rossi. The three figures are grouped closely together and in rich colour. The Pope sits not on a throne, but more informally, a magnificent illuminated book (thought to be the ‘Hamilton’ Bible from about 1350) open in front of him and a magnifying glass in his left hand. Every surface texture is lifelike, from the polished metal sphere on the back of the chair with its carefully projected reflection, to the hair and fur.

Pope Leo X was a Medici; at the left, Giulio de’ Medici later became Pope Clement VII. Cardinal Rossi, on the right, died in August 1519, putting an end date on this painting.

Saint Margaret was probably painted by Raphael’s workshop in 1518, one of a number of works at that time destined for the French court. This is thought to have been for the King’s sister, Margaret of Valois. Vasari reported that this was painted by Giulio Romano from a drawing by Raphael, but its long history of restoration makes that difficult to determine. The wide gape of its dragon is delightful.

One thoroughly controversial painting from around 1518 is this Portrait of a Young Woman, which became known as La Fornarina during the seventeenth century. This may well have been painted by Giulio Romano after a composition by Raphael, and almost certainly shows an unidentified woman rather than the baker’s daughter implied by its nickname. The woman appears similar to the figure of Mary Magdalene in The Ecstasy of Saint Cecilia, above, but there doesn’t appear to be any evidence that this is a portrait of Raphael’s partner, as is widely held. Indeed in the seventeenth century it was supposed that the woman was a courtesan.