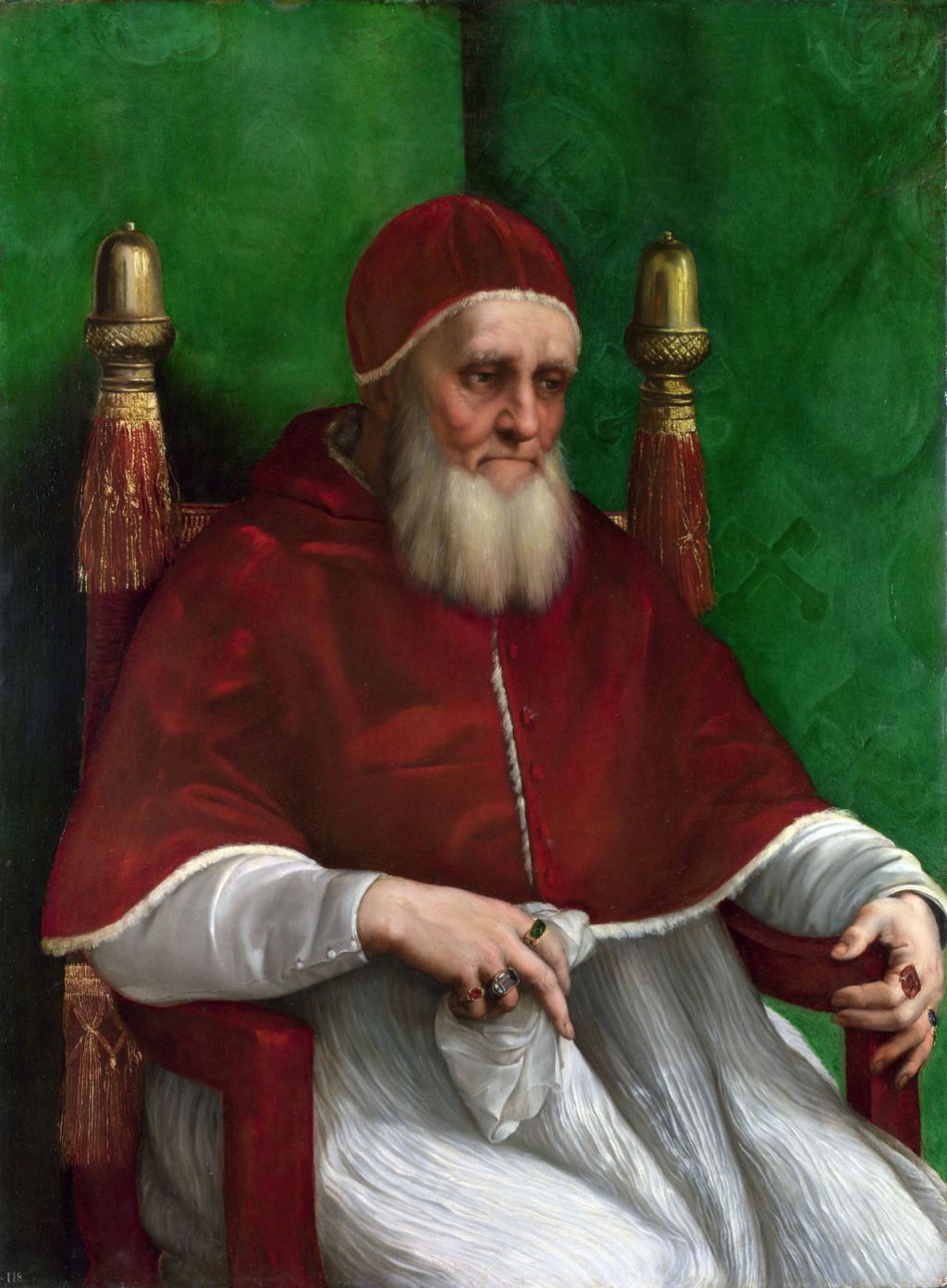 The huge frescoes painted by Michelangelo and Raphael in the Vatican between 1508 and 1513 are among the greatest works of the High Renaissance. These were commissioned by Pope Julius II, and there is no doubt that in doing so, he became one of the most important patrons of European art. This article considers how much his patronage influenced these works of art, and his place in the history of art.

Giuliano della Rovere became Pope in November 1503, and died while still in office on 21 February 1513. Then and now he had a fearsome reputation for his temper, and inflexibility. He had been made a Cardinal in 1471, and in 1484 he started negotiations with Francesco Gonzaga, Marquis of Mantua, to let Mantegna go to Rome. These were successful in 1488, when the artist was commissioned by Pope Innocent VIII to paint the chapel of the Belvedere.

As Cardinal he also undertook an extensive building programme. This included much of three palaces, the restoration of two ancient basilicas, and extensive work at a third. He had gathered a collection of antique sculpture, and commissioned Pollaiuolo to make sculptures, including gilded bronze doors with reliefs for his titular church of San Pietro in Vincoli. Even before becoming Pope, he had been a significant patron of the arts.

No sooner had Julius been elected Pope than he engaged the architect Donato Bramante (1444-1514), and commissioned him to design a complete replacement for the Basilica of Saint Peter, on which building work started in earnest in 1506. While Bramante was busy on that, Julius invited Michelangelo to return to Rome, and commissioned him to build his tomb, with forty statues, a task which he eventually worked on over a period of forty years.

Bramante resented the presence of Michelangelo, and took the opportunity to recommend the young Raphael to the Pope. In 1508, Raphael was also invited to Rome to work on commissions for Julius.

With two of the finest painters of the day in Rome, Julius decided that he wanted frescoes. When the Pope first invited Michelangelo to paint the ceiling of the Sistine Chapel in 1506, the artist was reluctant, preferring to sculpt instead. It has been claimed that Bramante tried to set Michelangelo up to fail, and pressed Julius to insist; given Michelangelo’s earlier apprenticeship with Domenico Ghirlandaio that seems unlikely. The Pope’s attention was also diverted by military campaigns, in which he personally led troops into battle at Bologna. But in 1508, six months or so before Raphael arrived in Rome, the Pope finally got Michelangelo to agree to this extraordinarily ambitious commission.

Julius already had the intention that Michelangelo would paint twelve large figures of the Apostles on the chapel ceiling, but the artist had other ideas. He seems to have been one of the few people to have successfully negotiated with this Pope – who modelled himself on Julius Caesar – and was allowed to paint what he wanted. I suspect that’s a little exaggerated, and Michelangelo’s preparatory work would still have been closely monitored and approved before he applied any plaster and paint, but it’s clear that what we now see on the Sistine ceiling is Michelangelo’s vision, not that of Julius.

Michelangelo painted a total of 343 figures on the 41 by 14 metre (130 x 45 feet) ceiling over a period of four years, standing day after day on his scaffolding. The end result is one of the greatest artistic accomplishments of mankind, and a major influence on painting ever since, including Raphael’s own frescoes.

The most famous individual scene, The Creation of Adam, has probably been quoted more than any other single work of art, before or since.

With Michelangelo fully occupied up his scaffold, Julius turned to the young Raphael, and commissioned him to paint the first of a series of rooms which became known not as the Pope’s but as those of the artist: Raphael’s Stanze in the Vatican Palace. As I have already covered these in my current series on Raphael’s paintings, I will here show a couple of examples to consider the influence of Raphael’s patron.

The large frescoes in Raphael’s first Stanza, the Stanza della Segnatura, show his greatest artistic independence, both from his patron and workshop. The themes were almost certainly determined for him, and preparatory drawings approved, but there’s more in what was probably the second of these to be completed, The School of Athens, over the period of about 1509-10. In its assorted collection of Greek philosophers, the artist worked in numerous diverting scenes in which the viewer is challenged to recognise the participants. This is all set in an extended fantasy based on Bramante’s architecture.

Like other wise patrons, it’s most likely that Julius obtained specialist advice from intellectuals in his circle, in this case most probably from Tommaso Inghirami (1470-1516), a humanist scholar who was a distinguished orator and member of the papal court. Raphael painted Inghirami’s portrait in about 1513, and is believed to have modelled the figure of Epicurus in The School of Athens on him.

Raphael’s later stanze, completed after the death of Julius, showed greater influence of his patron over their themes and content, and more involvement of the members of the artist’s workshop. The Liberation of Saint Peter in the Stanza d’Eliodoro was probably finished in the year after the Pope died, but refers to a story from the Acts of the Apostles, chapter 12, verse 6ff, which was dear to Julius. When he had been a Cardinal, he’d been in charge of the early Christian church of San Pietro in Vincoli in Rome, which was dedicated to this legend.

Michelangelo and Raphael were not the only famous painters whom Julius commissioned: when Raphael was still working on his first stanza, his former master Perugino was busy painting the ceiling of what was later to become Raphael’s third stanza, Stanza dell’Incendio.

Raphael completed at least two additional commissions for Julius: the inevitable portrait in 1511, and what is now known as the Sistine Madonna.

Julius donated this portrait to the church of S Marcello in Rome. It’s a remarkably familiar and informal image, with the Pope sat not on his throne dressed in pontifical robes, but on a more everyday sede camerale and in working rig, as if in an audience. This was the friendly image that Julius wanted to leave the world with.

The Sistine Madonna (1512-13) is now recognised as one of Raphael’s greatest and most important paintings. It was donated by Julius to the Benedictine basilica of San Sisto in Piacenza, where the relics of the two saints shown, Saint Sixtus II and Saint Barbara, were preserved. Raphael’s model for Saint Sixtus was perhaps inevitably Julius himself, and the association is strengthened by the embroidery on the saint’s clothing.

Otherwise I have no idea how much influence his patron may have had over the content of this wonderful painting, but it was made as its patron was in terminal decline.

Julius did a great deal more than just fund these paintings. It was he who persuaded Michelangelo to paint rather than sculpt, and in doing so allowed him the licence to create one of the great paintings of European art. It was he, on Bramante’s recommendation, who brought the young Raphael to Rome and gave him rooms to paint. And in most of those frescoes, it was Julius who supplied the theme, and a guide as to what he should paint.

The papacy of Julius II was a rare confluence of patronage with two of the finest artists of all time. Without the patron, the world really would be a poorer place. If it was the Pope’s intended legacy to mankind, what riches Julius left us.