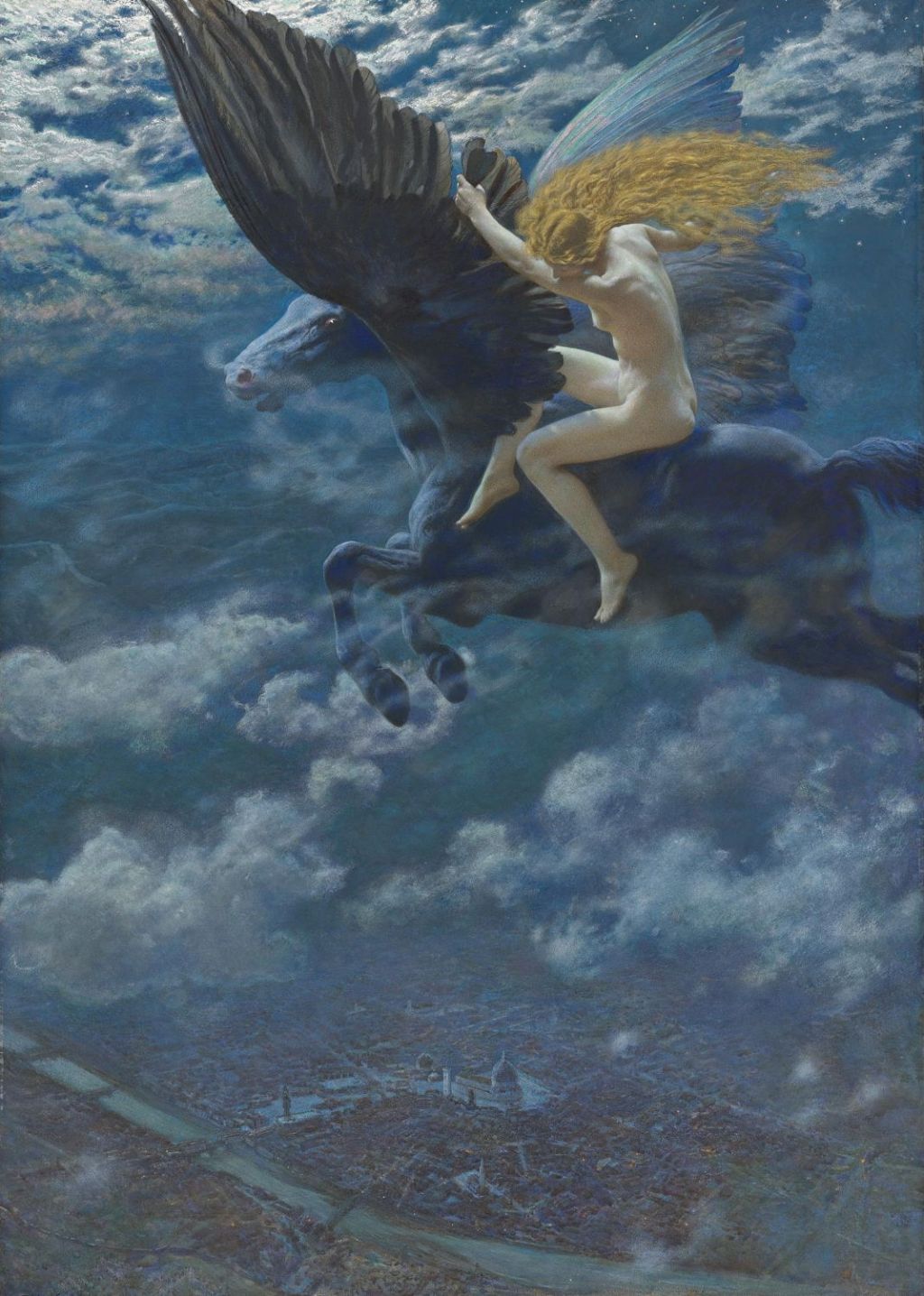 In yesterday’s article I looked at paintings of the winged horse from classical Mediterranean mythology, Pegasus. He wasn’t alone: among the mythical menagerie are others, most notably the hippogriff, or hippogryph. Its name reveals that it is a composite of horse (‘hippo’) and griffin, itself a composite of eagle and lion. Although references to this beast are scant, it seems likely that it was intended to have the head and wings of an eagle, and the body and hindquarters of a horse, but some have turned it into a winged horse like Pegasus instead.

In Western culture and art, the hippogriff is best known through its starring role in Ludovico Ariosto’s epic poem Orlando Furioso, in which he describes it as being a cross between a mare and a griffin, which would at least give it an eagle’s wings and the body of a horse.

Girolamo da Carpi must have read Ariosto’s description of the hippogriff soon after its publication in 1516-1532, and gives his image of the beast substantial wings. Its head doesn’t look particularly aquiline though, neither is this just another Pegasus. He shows an episode in Orlando Furioso in which one of the epic’s supporting heroes, Ruggiero, flies in on a hippogriff to rescue the heroine Angelica, in a story closely modelled on the myth of Perseus and Andromeda.

In the early nineteenth century, Louis-Édouard Rioult also sticks closely to Ariosto’s lines, as he shows Ruggiero flying away with the rescued Angelica.

Eugène Delacroix’s watercolour sketch shows a beast more like Pegasus, though. This is supported by Ariosto’s later account of the hippogriff, which is only brought under control when fitted with a bespoke bridle, something you’d be hard-pressed to fit to the head of an eagle.

Enthusiasm for painting hippogriffs lasted well to the end of the nineteenth century. At the time that French Impressionists were making their impact felt, Paul-Joseph Blanc painted this very detailed Salon-pleaser of Ruggiero Rescuing Angelica (1876). If he had equipped Ruggiero with a kibisis containing the head of Medusa, and the orc had looked a little less feline, it could readily have passed for Perseus and Andromeda, with Pegasus.

One common mistake is assuming that Ariosto has the hippogriff fly all the way to the moon when Astolfo goes there to obtain Orlando’s lost wits. As shown here in one of Gustave Doré’s fine illustrations for the poem, Astolfo and Saint John travel to the moon and back in Elijah’s chariot, drawn by a team of horses. That doesn’t stop Doré from putting wings on their backs.

I suspect that it was Doré’s illustrated edition of Orlando Furioso which first interested the Nabi artist Paul Ranson to paint this Hippogriff in 1891. What Ranson paints seems to have little to do with Ariosto’s beast, though, as it has multiple human faces, a bishop’s mitre with cuneiform marks around the base, and its wings seem more like those of a peacock, with a small eye at the tip.

There are also a few Symbolist paintings of what are simply horses with wings: not Pegasus in one of the classical myths or a derivative, nor hippogriffs.

A winged horse plays a role in Pierre Puvis de Chavannes’ Fantasy from 1866, which he painted as a reaction against the popular trend towards realism. Two naked people of indeterminate gender are in an idyllic wooded landscape near the foot of sheer cliffs. One sits plucking flowers to form a wreath, the other uses a length of ivy to ‘train’ a winged white horse. In almost every respect, this was the antithesis of social realism, pre-Impressionist landscapes, and Academic painting.

Gustave Moreau’s undated Travelling Poet shows an androgynous poet with an Indian musical instrument on their back, a winged horse, and a brilliant star in the sky immediately above them. This too may simply have been the artist’s Symbolist reaction against the trend.

Perhaps we should all keep a close watch on the skies above us.