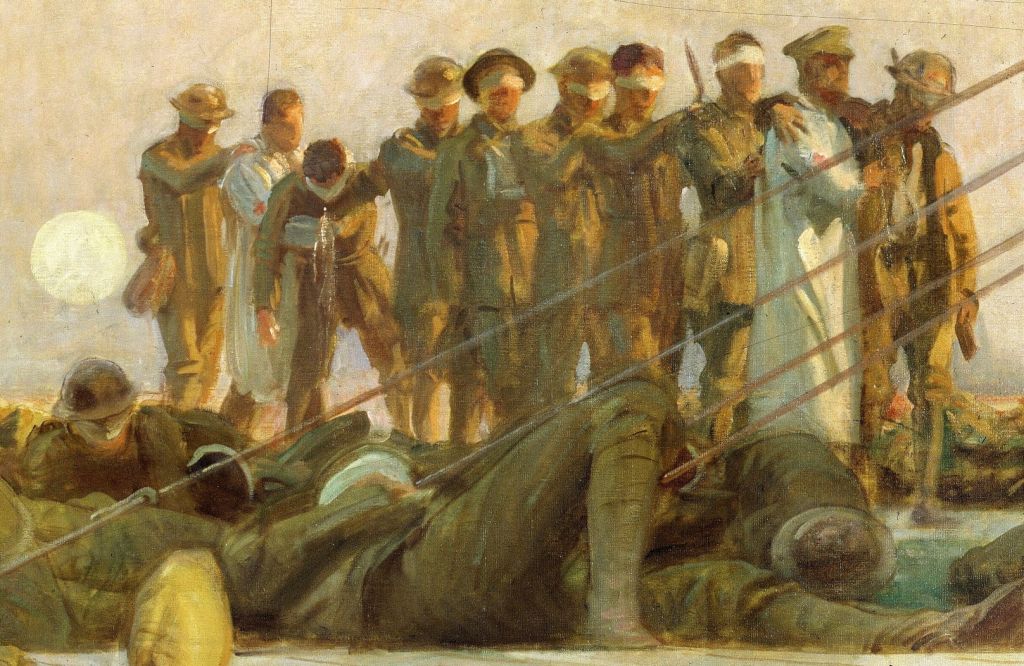 In 1919, the Great War continued to dominate much of art, with those painters who had been war artists completing major works for visual memorials to the millions who had died, and others recording the labours of those who had supported the war effort and reconstruction afterwards. In this selection of paintings completed in the year after the war, I look at some of the best of those memorials.

Paul Nash’s The Menin Road (1919) was commissioned by the British War Memorials Committee in April 1918 for its Hall of Remembrance, for which John Singer Sargent’s Gassed (below) was also intended. It shows a section of the Ypres Salient known as Tower Hamlets, after what is now a part of eastern London. This area was destroyed, reduced to barren mud, during the Battle of the Menin Road Ridge.

Sargent, as an American who had worked much of his career in London, was commissioned by the same War Memorials Committee to paint a large work showing Anglo-American co-operation in the war. This was originally destined for a Hall of Remembrance as its very large if not monumental painting; the hall was, in the end, never built. In July 1918, Sargent set off for the Western Front with Henry Tonks, a distinguished British artist, and they visited units near Arras and Ypres, close to the area painted by Nash.

According to Tonks’ recollections recorded in a letter two years later, they both witnessed the result of a mustard gas attack during the opening of the Second Battle of the Somme on 21 August 1918 (although records suggest that may have been on 26 August). In the late afternoon, they heard that many casualties were arriving at a Corps dressing station at le Bac-du-Sud, so went there. Lines of gassed casualties were being led in, in parties of about half a dozen, with a medical orderly in front. Apparently, Sargent was “struck by the scene and immediately made a lot of notes.”

When Sargent came to work on this epic painting for the commission, he apparently had the idea of a work involving “masses of men”, along the lines of Signorelli’s fresco The Damned (1499-1505), but he feared that trying to combine separate images of British and American troops in such an epic would look “like going to the Derby.” His solution was to borrow from Pieter Brueghel the Elder’s The Blind Leading the Blind (1568), taking the lines of casualties that he had seen, and making them the central theme of the painting. This change to his commission required the approval of the War Memorials Committee, which he obtained before he started work on the painting in his studio in Fulham, London, in late 1918.

There are several fascinating details in the finished painting, including the game of soccer taking place in the distance, seen in the detail above. Sargent probably added that as a reference to the activities of normal life, contrasting with the horror that is taking place throughout the rest of the painting.

Most remarkably, there is only one pair of eyes visible in all the soldiers present, in the medical orderly near the head of the second line at the right. He even turned the orderly who is tending to the nearer line of casualties so that he faces away from the viewer. This emphasises the blinding effects of the mustard gas, and develops the painting’s theme of vision and art.

Sargent’s monumental painting was completed in March 1919 and the Royal Academy of Arts voted it the picture of the year. It remains one of the most important paintings of 1919.

Henry Ossawa Tanner’s The Arch (1919) is a record of events in the evening of 13 July 1919, when a cenotaph in memory of French soldiers, built under the Arc de Triomphe in Paris, was dramatically lit for a large public gathering. His slight readjustment to that reality may have been the symbolic addition of a widow and orphan in the foreground at the left, and a couple of uniformed veterans to the right.

Robert Sterl’s oil sketch of Ironworkers shows workers at one of the Krupp plants in Germany who had been so important during the war, and whose labours were so essential to the peace afterwards too.

In Spain, Joaquín Sorolla was very busy working on a commission for Archer Milton Huntington, an American philanthropist who had founded the Hispanic Society of America in New York, to paint fourteen huge canvases to cover the walls of the society’s library. This became his epic cycle Visions of Spain, which drove the artist to exhaustion during the later part of his career.

Ayamonte, Tuna Fishing (1919) is a section from one painting in this series, showing the tuna market in the town of Ayamonte, Spain, which must have reminded Sorolla of his own summers in Valencia, with the local fishermen there.