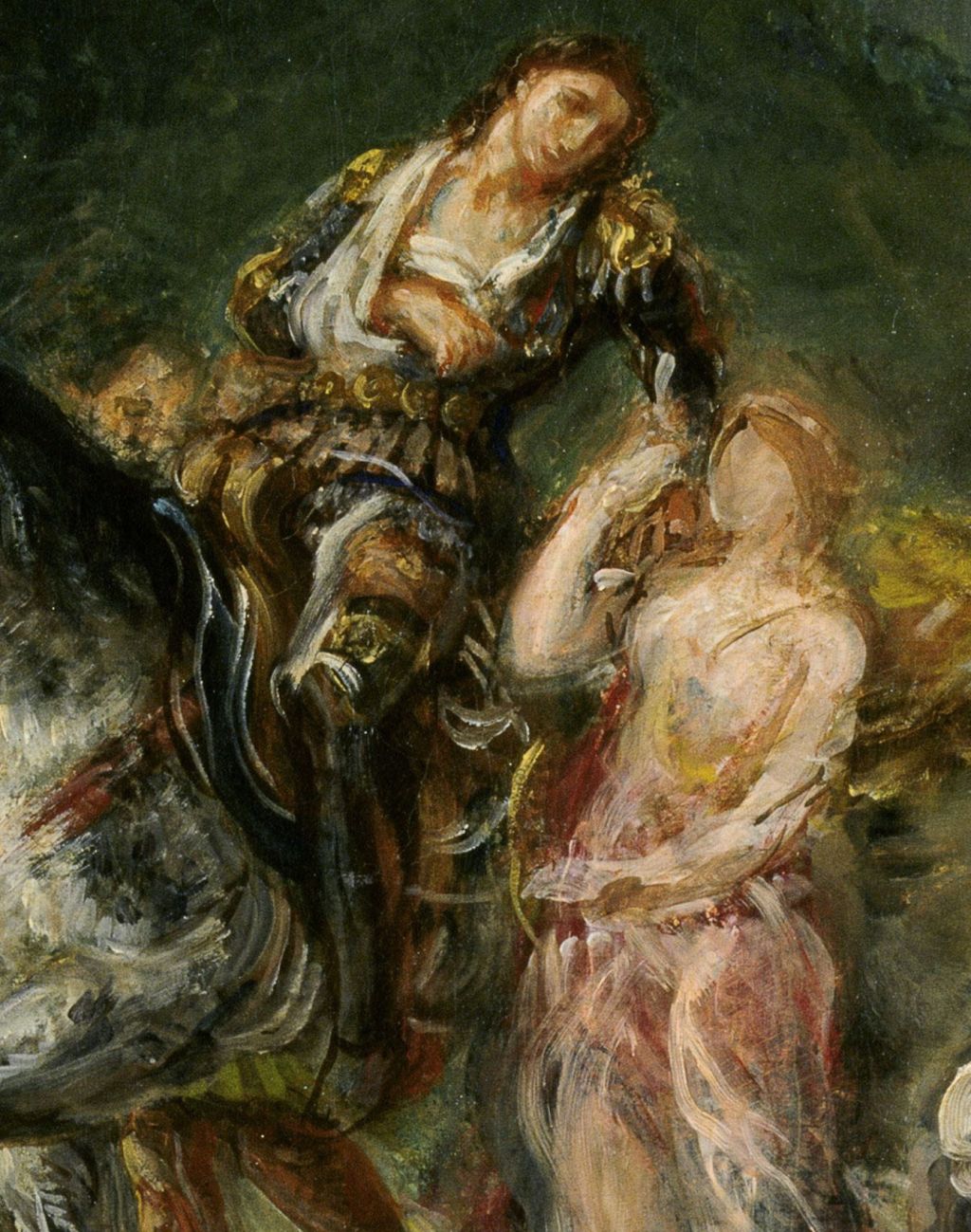 The story of Angelica and Medoro is one of the most painted sections of ‘Orlando Furioso’. To allow for a reasonable selection of its paintings, I have therefore divided this account into two articles. I hope you enjoy this wealth of fine paintings.

Medoro and his friend Cloridano were fighting for the Saracens at the siege of Paris. When their leader, Prince Dardinello, was killed in combat, they resolved to cross into no-man’s land, search for his body, and give it a proper burial. After dark, they set out, silently murdering sleeping Christians on the way.

When they prayed to the moon, its light revealed the prince’s corpse, which they collected and started to carry back between them. As they did so, the first light of dawn appeared, and some of the Christian forces started to wake for the day. Cloridano panicked and ran, leaving Medoro to take the full weight and hurry on faster.

Medoro and Cloridano now enter a wood. Weighed down by the body, Medoro falls behind and becomes lost in the undergrowth. Cloridano runs like the wind, until he looks back and can’t see his companion, so turns and re-enters the wood. There he hears the hooves of horses in pursuit: a hundred horsemen now stop Medoro, and their commander Prince Zerbino orders them to capture him. Medoro is forced to abandon his prince’s body, as he is tiring.

Cloridano looses an arrow from his bow and shoots through the temple of one of the Scottish horsemen pursuing Medoro. A second arrow strikes another in the throat. Zerbino is angered by this, and pulls Medoro along by his long golden hair. The young Saracen begs the Scottish prince that he be permitted to bury his leader. As Zerbino is about to agree to this, a brutal knight strikes Medoro in the chest with his lance, and leaves him for dead. At that, Cloridano rushes out of the bushes, swinging his sword at the Christians, and is quickly killed before the Scots horsemen ride away.

Medoro lies near-dead in the wood, by the corpse of his friend Cloridano. Later that day, Angelica, dressed as a shepherdess, passes by. She has recovered the magic ring which had been stolen from her by Brunello, and is now riding alone, unmoved by Orlando’s love for her. She comes across the two soldiers, and recognises that Medoro is only just alive.

Angelica remembers seeing a herb to stop bleeding a litle way back on the path, so gathers its leaves to take back to treat Medoro. She bumps into a shepherd on horseback, who is looking for one of his heifers, and enlists his help in trying to resuscitate the young soldier.

She applies the herb to his wound to stop it from bleeding, and he starts to improve quite rapidly.

Once he is strong enough, Medoro is ready to ride the shepherd’s horse, but he insists that both Prince Dardinello and his friend Cloridano are buried first.

Angelica and her patient then stay in the shepherd’s home until Medoro is fully recovered. Over this time, Angelica’s initial pity for the young man turns into a burning passion for him.

Her desire for Medoro reaches the point where she gives up her virginity, and they marry, the shepherd’s wife acting as Angelica’s bridesmaid.

Angelica, beautiful daughter of the ruler of Cathay, who is loved and pursued by innumerable knights both Christian and not.

Dardinello, son of King Almonte and cousin of King Agramante, a ‘pagan’ prince.

Medoro, one of Prince Dardinello’s Moorish soldiers, a ‘pagan’.

Zerbino, son of the King of Scotland and the leader of the Scottish forces.

Eugène Delacroix (1798–1863) was a major French painter whose Romantic and painterly style laid the groundwork for the Impressionists. In addition to many fine easel works, he painted murals and was an accomplished lithographer too. Many of his paintings are narrative, and among the most famous is Liberty Leading the People from 1830. This article looks at some of his narrative works.

Giovanni Lanfranco (1582–1647) was an Italian painter of the Baroque period who was born in Parma and trained in the Carracci workshops. He moved to Rome, where he worked for most of his career. He painted a wide range of narrative and religious works, in fresco and oil on canvas. His style reflected that of the Carraccis and of Correggio, although he also painted some ‘tenebrist’ works.

Simone Peterzano (1540–1596) was a Venetian painter who trained under Titian, and is now best known for his frescoes, and for being Caravaggio’s master. His own paintings are in Mannerist style.

Mihael Stroj (1803–1871) was a Slovenian painter, who was born in Ljubno but soon moved to Ljubljana with his family. He trained locally before moving to the Academy of Fine Arts in Vienna. He specialised in portraits and religious works, working almost entirely in oils. He spent periods in Zagreb, and is now considered one of the most important Slovenian artists of the nineteenth century.

Giovanni Battista Tiepolo (1696–1770) was a major and prolific painter who was born and worked mostly in Venice. He trained in Venice, where he became painter to the Doge. His works are generally luminously chromatic, quite painterly and decorative in approach. He completed several major semi-decorative commissions, including some in Würzburg and Madrid, as well as in the palazzos of Venice. His son Giovanni Domenico was also a well-known painter.