Making Macs more accessible is a minefield of conflicting requirements in which it’s so easy to address one requirement and lock many other users out. Following a couple of comments here, I’ve turned my attention to dictation and voice control, and how they’ve changed in Catalina.

In Mojave, Dictation is controlled in the tab of that name in the Keyboard pane. For this, I turned on Enhanced Dictation; although I don’t use this regularly, I have used it over several versions of macOS and am familiar with its performance. 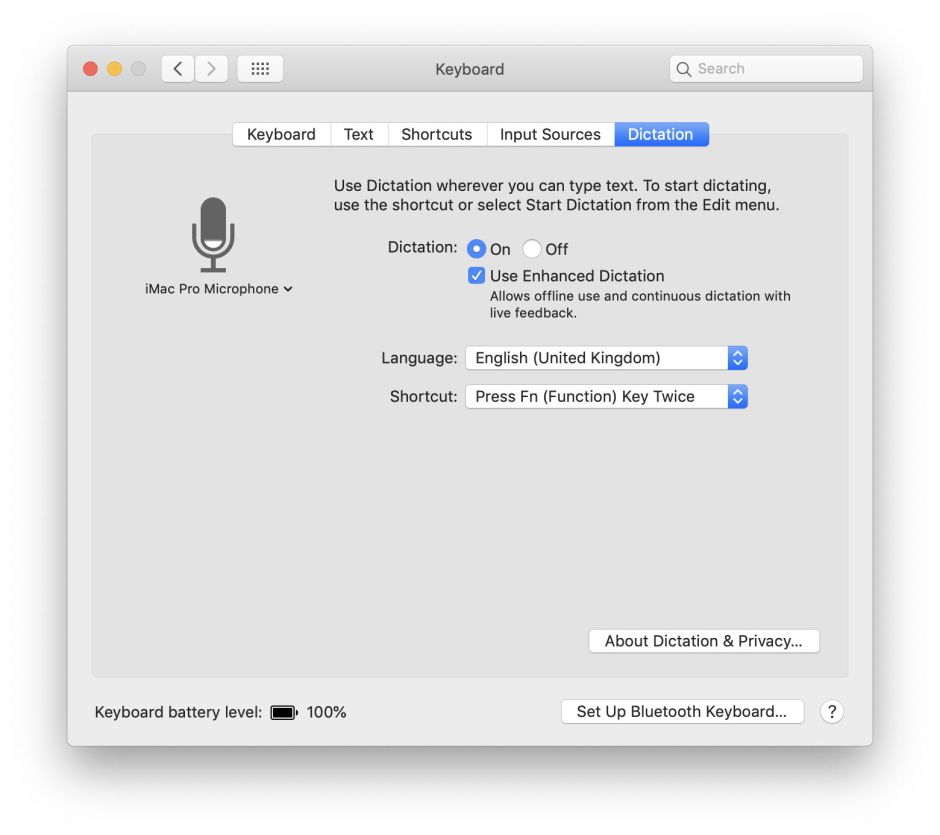 Oddly, to access the commands available when dictating, you have to switch to the Accessibility pane, where the Dictation item offers a button Dictation Commands… which displays the set of built-in commands such as Select previous word. There’s an option to enable additional or ‘advanced’ commands there, and you can enable/disable individual items from the list, but you can’t add any custom commands.

Once enabled and set up, to use dictation all you do is press your designated key, by default the Function key pressed twice, and speak away when you’ve placed the insertion point in a view which accepts text input.

In my experience, Enhanced Dictation is a very effective way to enter and edit quite substantial documents. For someone with limited use of the wrists, hands or fingers it is a realistic alternative to the keyboard they would struggle with. Accuracy is always a problem, and macOS doesn’t appear to ‘learn’ your voice or vocabulary. As its performance is specific to individuals, you may find it too inaccurate, but it’s quickly set up and can work really well for dictation.

Where previous versions of macOS have fallen short is in voice control. Dictation is no substitute for a general input device such as a mouse or trackpad. If you’re looking to be able to control your Mac entirely by voice, then Dictation isn’t much help: you’ll need an alternative input device or third party software, most probably both.

Apple’s goal in Catalina has been to address that gap, but in doing so it is dictation which has suffered. The old Dictation tab is still in the Keyboard pane, but Enhanced Dictation has been removed. This means it lacks all the useful formatting commands, like ‘new paragraph’, and will turn itself off after a few moments without speech input. For someone used to Enhanced Dictation, this is very poor indeed.

Instead, go to the Accessibility pane, to its new Voice Control item, where you should select which language you want to use and tick Enable Voice Control. Your Mac will then download additional software – for UK English, 422 MB – and you are then ready for both voice control and dictation.

Click on the Commands… button and you’ll discover how these not only include an extensive suite for editing text, but a great many for controlling your Mac. And you can add your own, which can be app-specific or global, and can invoke scripts and perform all sorts of useful actions.

When Voice Control is enabled, a small floating window with a microphone is its on-off control. Activate it by saying “Wake up” or clicking on its button, and deactivate it using “Go to sleep” or clicking Sleep.

Apple details this extensively in this support note; although not a comprehensive reference, it’s a good starting point for exploring what Catalina can offer. The snag is that it doesn’t work at all well at the moment, as far as I can tell, and there are significant differences in performance between languages too.

Apple’s note states that the speech recognition for Voice Control is performed by the Siri engine when you have opted for US English, but for all other languages the same engine is used that was in Enhanced Dictation. Given how well Enhanced Dictation performs with UK English, I was expecting even better performance than in Mojave. I was bitterly disappointed.

I tested this out using the internal microphone in my brand new MacBook Pro 16-inch, which has an 8-Core i9 processor with 16 GB of memory, and at the time was otherwise very lightly loaded. When dictating in UK English, I could only speak 3-4 words at a time, then had to wait a few seconds until they had been correctly recognised, before I could continue.

Abandoning dictation as frustration, I then tried out Voice Control using UK English, which is rather better. The round trip time for each command is quite noticeable: you say “Click Cancel”, for example, and a few seconds elapse before the Cancel button is magically clicked, but it does work a great deal of the time.

What was more surprising was how much better my very Eastern Atlantic speech worked with Voice Control switched over to US English: dictation was far more usable than with UK English, and straight control seemed to work first time with almost everything. This may reflect insufficient development and testing of non-US speech.

Catalina’s Voice Control is an extremely frustrating product. I can see what it’s trying to achieve, which is commendable, but it’s too far away from that to have abandoned Mojave’s highly usable Enhanced Dictation. If you rely on the latter, don’t upgrade to Catalina until this has improved substantially. Even then, you may find that some languages are bad news. If you’re looking for full Voice Control and can get on with the US English setting (or another language which works as well), then Catalina should be a big step forward.

Whatever you do, please tell Apple about your experience with Catalina’s new Voice Control: it’s only through feedback that it will change to meet your needs better.