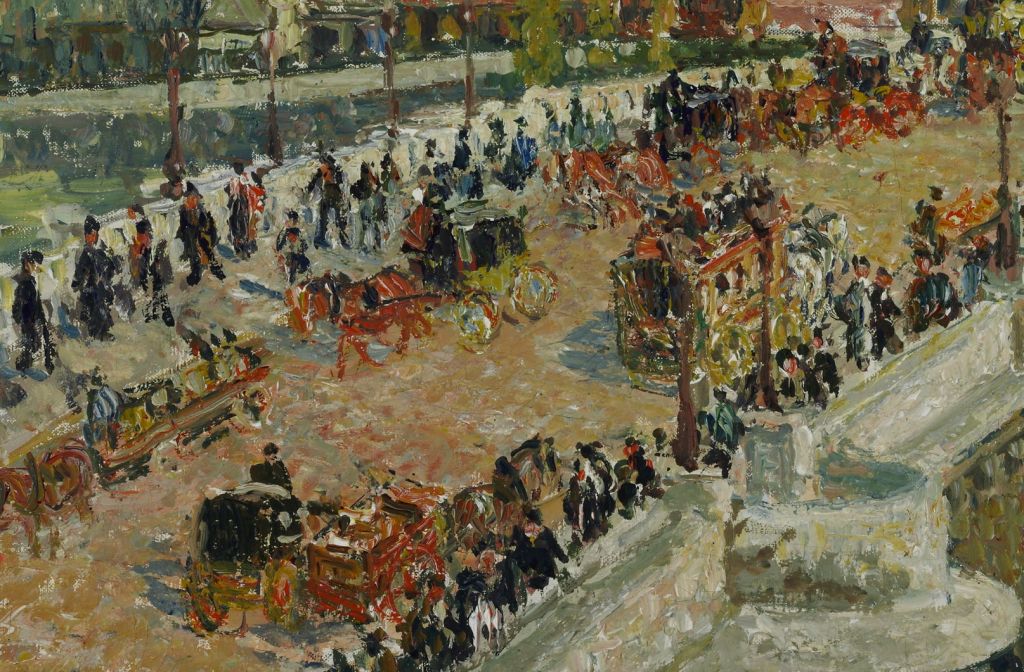 Pissarro’s eye problems were demanding more medical attention, but as he entered the twentieth century, there seemed no holding back his painting. His series of cityscapes made from behind the windows of hotel rooms and apartments were proving highly successful: at the end of March 1900, Durand-Ruel bought nine that he had painted when the Pissarro family had stayed in an apartment on the Rue de Rivoli in Paris.

He was honoured at the Exposition Universelle in Paris that year, where he was included in a large section dedicated to Impressionism. Seven of his oil paintings and a drawing were exhibited alongside the work of other leading artists from Manet to Sisley. In these opening years of the new century, few months seem to pass without Pissarro’s paintings being exhibited somewhere in Europe or North America.

Pissarro travelled frequently over these years too, to continue painting series of cityscapes, and at times like the autumn/fall to return to Éragny for its rich colours. In early June 1901, Pissarro left Éragny to explore the Channel coast in search of a suitable location to paint during that summer. He settled on Dieppe, which was within easy reach of Paris and his eye care there. He stayed in the port from late July to the end of September, during which he made nine oil paintings from the window of his hotel.

During this visit, he concentrated his attention on the nearby church, as in The Church of Saint-Jacques in Dieppe, Sunlight, Morning (1901). Here the streets beside the church are uncharacteristically almost deserted, and there’s little human landscape to be seen.

His visit did, though, coincide with a summer fair, which he painted in The Town Fair by the Church of Saint-Jacques in Dieppe, Morning, Sunlight (1901). This is a late example of Pissarro’s enduring affection for markets and fairs, as well as an exceptionally dense human landscape.

Among the series which he completed in the city of Paris is this amazing view of the crowds on the Pont-Neuf bridge in Paris, in 1902.

Many here even have faces, with different skin complexions. There’s a brown horse harnessed in to a posh-looking green-gold and black carriage, another charabanc with a sub-crowd on its open top, and dozens and dozens of pedestrians.

From early July to the end of September 1902, Pissarro paid a return visit to the port of Dieppe, where he turned his attention to its harbour, a theme developed from his earlier series showing docks in Rouen.

The Outer Harbour at Dieppe, Morning, Overcast Sky (1902) shows a small steam packet which is unlikely, even in summer, to have crossed the Channel, but may have taken tourists on day cruises along this stretch of coast. At various times, there were also ferry services from Dieppe to the Channel Isles, on the other side of the Cherbourg peninsula.

Pissarro’s quayside is still lined with people in this view of The Outer Harbour of Dieppe, Afternoon, Sunlight (1902). This painting was given to the Mayor of Dieppe in appreciation by the artist, and was the only work which he donated to a public collection.

He continued to paint series in Paris in 1903. The Quai Malaquais and the Institute of France is one of several views which he painted from windows over the centre of the city. Just as in his landscapes made thirty years before, its leafless trees break the view of the bridges and river. In the right distance the dome of the Institute of France stands over the vanishing point of the quay.

At the end of September, Pissarro returned to Paris from his summer travels. Shortly before moving to a new flat, at the age of seventy-three, he painted this last Self-Portrait with Hat (1903).

In early October, Pissarro fell ill, perhaps with influenza. His condition slowly deteriorated despite medical attention, and on 13 November 1903 he died in Paris. A Father of Impressionism, and one of the greatest landscape artists of the nineteenth century, was dead.