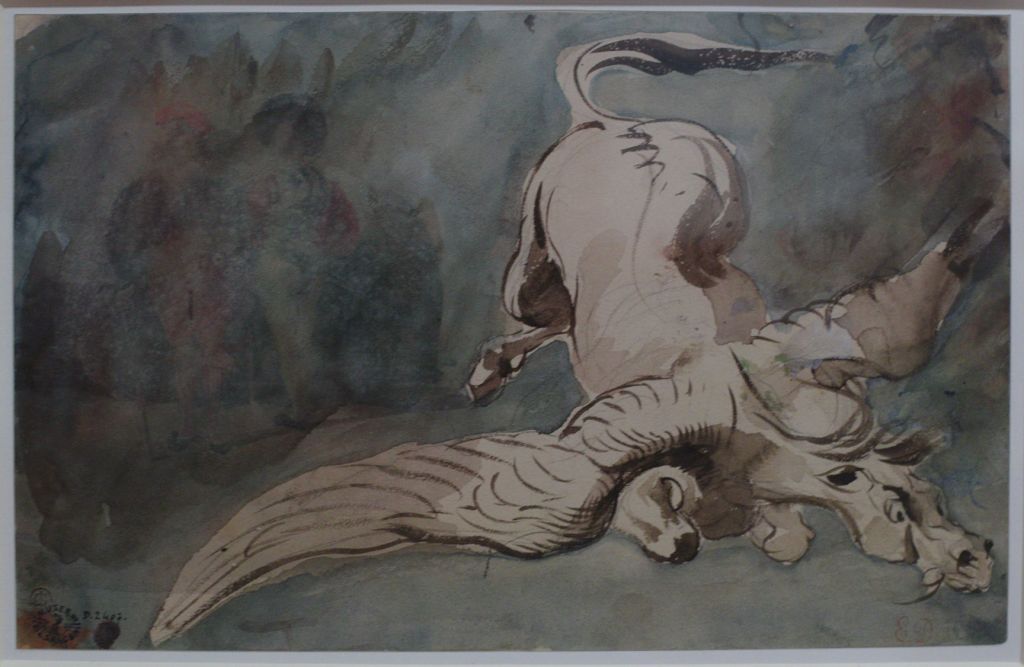 Ariosto continues the story of Orlando Furioso from the end of Matteo Maria Boiardo’s Orlando in Love, but it stands alone. In that earlier epic, Angelica, beautiful daughter of the king of Cathay, attends a tournament at Charlemagne’s court, where she offers herself as the prize for anyone who can defeat her brother Argalia. When he is killed by Ferraù, she flees, with Orlando and Rinaldo in hot pursuit.

Angelica falls in love with Rinaldo, but he hates her. She is besieged by another admirer, and Orlando frees her. Rinaldo then tries to persuade Orlando to return with him to fight for Charlemagne.

The Saracen king Agramante has invaded France in order to avenge Orlando killing his father Troiano. In response, Rinaldo returns in haste to help defend France; chasing him is Angelica who is still in love with him, and following her is Orlando who is in love with her. With the two paladins duelling for Angelica, Charlemagne puts her in the care of Duke Namo of Bavaria, while offering her hand to the paladin who fights best for his cause against the Saracens.

Ariosto’s poem opens with a brief recap of those events, and an introduction to some of its major characters.

When Angelica foresees impending defeat for Charlemagne’s Christian forces, she escapes from Duke Namo on her horse. As she rides through a forest, she meets the knight Rinaldo in full armour but without his horse Baiardo, which has slipped away. Angelica rides away at speed until she reaches a stream deep in the forest, where Ferraù the Saracen sits on the bank, resting after battle, and without his helmet. Angelica screams at the sight.

When Rinaldo arrives, the two knights fight on foot, allowing Angelica to ride off. Rinaldo and Ferraù agree to pursue Angelica on the latter’s horse, until they reach a fork in the road where they separate. Eventually Ferraù returns to the spot where he had started, and looks for his helmet in the stream there. He see the ghost of Argalia, Angelica’s brother, whom he had killed in that very place. Ferraù then sets off to find Rinaldo again. Meanwhile, Rinaldo finds his horse, which gallops on ahead of him.

Angelica rides deeper into a dark forest, feeling that Rinaldo is close behind her in pursuit. She is now lost, and wanders aimlessly until she reaches a grove, where she falls asleep. She awakes to the sound of another knight approaching; that knight cries in grief. He is Sacripante, king of Circassia, another who has fallen hopelessly in love with Angelica. She decides to use him as her protector, so reveals herself and reassures him of her chastity.

Sacripante then decides that he will deflower her, but just as he is about to woo Angelica, a knight in white armour appears. Sacripante fights that knight, but when the white knight’s charge kills his horse, he is ignominiously trapped under its body. The white knight rides off, leaving Sacripante to gather his senses and deal with his shameful defeat.

While Angelica consoles the fallen Sacripante, a horseman rides up asking after the white knight, who is revealed to be Bradamante, a woman, which embarasses Sacripante even more. A little further on, Angelica and the knight come across Rinaldo’s horse Baiardo, who calms to Angelica’s hand, allowing her to mount his saddle. Sacripante joins her.

Ariosto opens the second canto by reflecting on how cruel love is, in making Rinaldo love Angelica, with her feelings towards him exactly the opposite, those of repulsion; this reverses the earlier situation, in which Angelica had loved Rinaldo but he had hated her.

Rinaldo tells Sacripante to dismount from his horse, accusing him of being a thief, but the Circassian challenges him. They then fight, Rinaldo still on foot, with Sacripante on Baiardo, who refuses to let his master come to any harm. Sacripante therefore dismounts and fights Rinaldo in close combat, taking a heavy blow from the latter’s sword Fusberta. Recognising that Rinaldo has the upper hand, Angelica flees on her horse into dense forest.

She comes across an old hermit riding a donkey. Although the elderly man looks pure, the sight of Angelica arouses desires which he thought had long gone.

She asks for directions to the nearest port so that she can leave Rinaldo in France. The hermit turns out to be a magician, and when he digs in his pockets, out pops a genie who flies off to where the knights are fighting, where he misinforms them that Orlando is now escorting Angelica to Paris.

Rinaldo mounts Baiardo and they gallop off in pursuit of Angelica. When they reach her, Rinaldo dismounts and lets his horse follow her, while he keeps further behind. But the genie deceives them both, forcing Rinaldo to head straight for Paris, where Charlemagne is preparing the city for siege. The King has sent to England for reinforcements, which he hopes to deploy later, so despatches the reluctant Rinaldo to Calais to cross the Channel and secure those extra forces. Rinaldo’s crossing of the Channel is stormy, and the ship is threatened repeatedly with capsize.

After Bradamante had left Sacripante trapped under his dead horse, she rode on until she reached a stream. There she met a knight who was crying with grief, and he told her his story.

This knight had been leading his troops to Charlemagne’s camp when he saw in the air a knight in full armour riding a horse with wings. This airborne knight swooped down and snatched up the damsel who the knight had also been escorting.

The grieving knight left his troops to search for the missing damsel, looking for six days and nights until he came upon a castle made of steel overlooking an isolated valley. As he was wondering how he could enter this apparently impregnable fortress, two knights and a dwarf arrived.

The knights were Gradasso and Ruggiero, and the dwarf announced that they were going to try their strength against the castle’s owner, who flies across the sky on a four-legged beast. After a short wait, the castle’s doors opened and its knight took to the air on a horse with wings. He soared high before diving with his lance drawn, and knocking Gradasso into the air with it. The same happened to Ruggiero, and the airborne knight continued to land blow after blow against the two knights below him.

Finally, at dusk, the hostile knight ceased his aerial attacks and used his shield to dazzle Gradasso and Ruggiero with a blinding red light. All those on the ground lost consciousness as a result.

When the grieving knight recovered consciousness, the others had vanished, and he feared that they too had been taken prisoner in the castle of steel. He therefore left that isolated valley and returned.

Bradamante had listened very carefully, particularly to mention of Ruggiero, who was in love with her although they had only met once. She comforted the grieving knight, whose name was Pinabello. He offered to take her to that castle of steel in quest for the missing knights. Just as they were about to ride off, though, a messenger called for them to wait. He asked Bradamante to return to give the French her support. She was then in a quandary, and decided to continue in her quest to rescue Ruggiero. She didn’t realise how treacherous Pinabello was, nor that at the first opportunity how he’d abandon her alone.

With Bradamante following him, Pinabello’s concentration lapsed, and they became lost in a dark forest, in the middle of which was a barren mountain peak. He told her to stay where she was while he went on and looked for shelter for the night, giving him the opportunity to leave her there. He found a cave in which to hide from her, but she was too sharp to be outwitted and followed him in.

Inside the cave the entrance led to a larger chamber from which there came a glow. Inside that was a fair damsel in fine clothes, so Pinabello entered the chamber. This prompted the damsel’s captor to hide her away from his prying eyes. Bradamante meanwhile cut a branch from an elm tree to secure her descent into the cavern with Pinabello’s assistance. As she was dangling from it, he seized the opportunity to let go, so that she fell to the bottom of the hole. Fortunately for her, the branch dropped first, and broke her fall. Although she was knocked unconscious briefly, she quickly recovered.

There ends the second canto, almost a literal cliff-hanger.

Angelica, beautiful daughter of the ruler of Cathay, who is loved and pursued by innumerable knights both Christian and not.

Ferraù, nephew to Marsilio, King of Spain, and a non-Christian.

Pinabello, son of Count Anselm Altaripa, a treacherous Maganzan who doesn’t follow the laws of chivalry, although a Christian.

Sacripante, King of Circassia, an ‘oriental’ and non-Christian.

Eugène Delacroix (1798–1863) was a major French painter whose Romantic and painterly style laid the groundwork for the Impressionists. In addition to many fine easel works, he painted murals and was an accomplished lithographer too. Many of his paintings are narrative, and among the most famous is Liberty Leading the People from 1830. This article looks at some of his narrative works.

Julius Schnorr von Carolsfeld (1794-1872) was a German painter who trained at the Vienna Academy, from where he went to Rome in 1815 to join the Nazarene movement there, with Johann Friedrich Overbeck and others. He was involved in the campaign to re-introduce traditional fresco painting, and in 1822 was commissioned to paint frescoes depicting Ariosto’s Orlando Furioso in the entrance hall to the Villa Massimo in Rome. He completed these by 1827, when he returned to Munich to paint frescoes for the new palace there showing scenes from the Nibelungenlied. He later turned to Biblical illustrations and designs for stained glass windows.