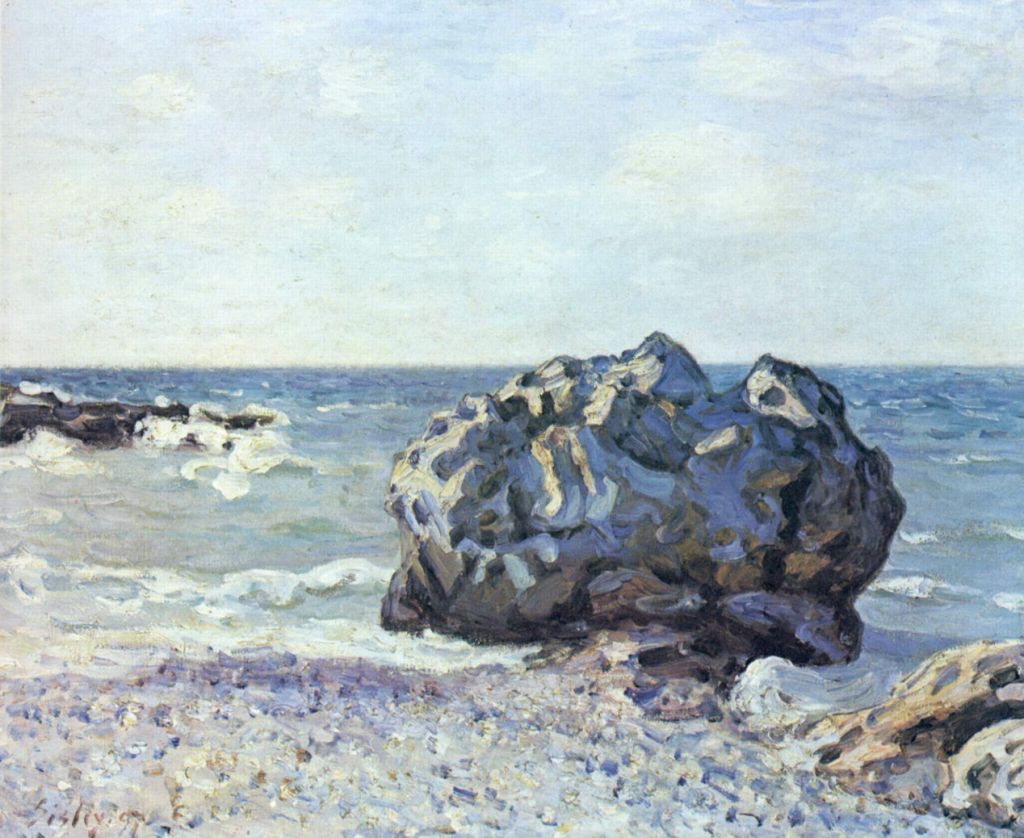 In stark contrast to Camille Pissarro and his family, the Sisleys continued to live in poverty in Moret-sur-Loing, earning just enough from Alfred Sisley’s paintings to feed themselves and pay for painting materials. His work was exhibited at St Louis and Pittsburgh in the USA, the Ghent Triennial in Belgium, in Hamburg, and at the Société Nationale des Beaux-Arts. However, in the summer he fell ill.

His Haystacks seems to have been painted at the end of the harvest in 1895, and is unusually rich in colour.

During 1896, Sisley was preoccupied preparing for a solo exhibition which was held in February 1897 at the Galerie Georges Petit in Paris, with 146 paintings and five pastels on display.

In the summer of 1897, when Alfred was fast approaching sixty, still unmarried to his lifetime partner Eugénie Lescouezec, and their children officially illegitimate, the Sisleys had a stroke of good fortune: his patron François Depeaux funded the couple to visit Britain.

They arrived first at the Cornish port of Falmouth, and moved on to Penarth, the seaside town to the south of Cardiff, Wales. After painting there, they moved west to Langland Bay, just on the Gower Peninsula and not far from the Mumbles, to the south-west of Swansea, then a popular series of picturesque cliffed bays. In all, Sisley returned to France with seventeen oil and about eight pastel paintings, each made in front of the motifs at Penarth and Langland Bay.

Although it was summer, Sisley’s visit seems to have coincided with poor weather. Penarth Cliff, Evening, Stormy (1897) shows the low cliff overlooking the Bristol Channel. Lavernock Point is in the centre distance, and the two low islands on the horizon are Flat Holm and Steep Holm.

Lady’s Cove, West Side, Wales (1897) shows a small stretch of sandy beach at the eastern end of Langland Bay also known as Rotherslade. The large rock on the beach is Storr Rock, then probably known as Donkey Rock.

Langland Bay (1897) shows the plentiful shipping just off the coast, with vessels bound for and from the industrial port of Swansea.

Windstorm (1897) shows the coast, presumably in Langland Bay, during a gale.

Storr Rock (1897) is another view of this rock in Langland Bay.

In August, Sisley legitimised their children, and married Eugénie at long last in Cardiff Town Hall. They arrived back in Moret-sur-Loing on 1 October 1897. Later that winter, Sisley developed chronic pain. In early 1898, he once again tried to progress his application for French citizenship, but ultimately proved unsuccessful.

On 8 October 1898, Eugénie Sisley died at Moret. By then, Alfred had already developed his terminal illness, cancer of the throat, and by the end of that year was gravely ill himself. He died at Moret on 29 January 1899, still the only British national among the French Impressionists. Their two children were left almost penniless, but later that year an auction of Sisley’s work – with contributions from others including Monet, Degas, Pissarro and Renoir – raised over 150,000 Francs, probably more than the lifetime total of Sisley’s sales.