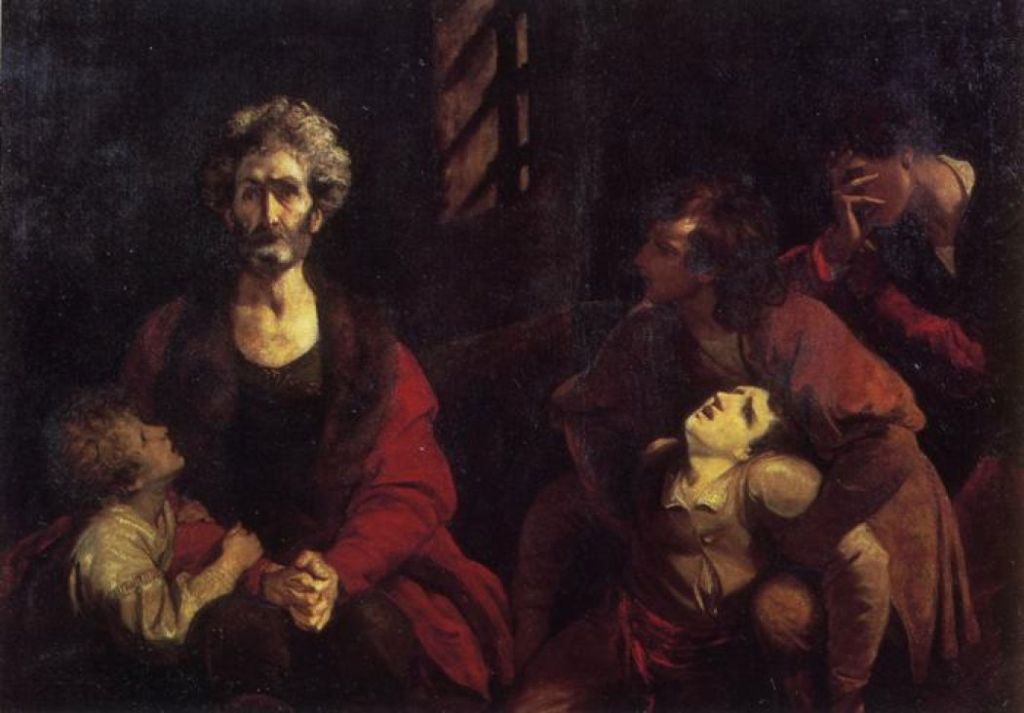 After meeting some political traitors, Dante and Virgil come across Count Ugolino, who is gnawing the back of the head of Archbishop Ruggieri as a dog chews a bone. Their story is one of the most horrific and famous in the whole of the Divine Comedy.

Ugolino raises his mouth from the cleric’s head and wipes his lips on his victim’s hair. He then introduces himself and the Archbishop. He explains how he, a leading politician at the time, was imprisoned with his young sons and left to starve to death. He tried gnawing his own hands, but his sons suggested that their father should eat them.

This glue tempera painting by William Blake is one of the few which isn’t taken from his last works illustrating the Divine Comedy, but from an earlier work. Its equivalent in Blake’s last series got no further than a pencil sketch, unfortunately.

Ugolino stopped gnawing his own flesh, and sat in silence day after day, watching his sons die in front of him. By the time that the last was dead, the Count himself had gone blind. Once confident that there was no life left in their bodies, his hunger overcame his grief.

In history, Ugolino was born into a Ghibelline family in the city of Pisa. He soon changed allegiance to the Guelphs, whom he helped in their quest for power in Pisa. When that was unsuccessful, the Count was imprisoned and exiled, but later he led Pisan naval forces against its rival Genoa, for which he was made the leader of Pisa.

In an act of political expediency, Ugolino then handed over Pisan castles to Lucca and Florence, following which he conspired with Ghibellines including Archbishop Ruggieri. This backfired on him, and the Archibishop had him imprisoned with his two sons, two grandsons, and another young man. After eight months there, the door was locked and nailed shut, and its key thrown into the river. Ugolino and the five young men died quite quickly of starvation.

As far as I’m aware, this painting of Count Ugolino and his Children in the Dungeon is the only work by Joshua Reynolds taken from Dante’s Divine Comedy. Exhibited at the Royal Academy in 1773, nearly five hundred years after the death of the Count, I’m not aware that Reynolds had access to any contemporary images of his subject.

It’s therefore revealing that this slightly later copy was one of many images of the faces of the famous and infamous on which Lavater based his textbook of physiognomy – which in turn was popular among painters, making it a self-fulfilling fantasy.

Dante and Virgil move on from Ugolino’s tragedy to meet some more traitors frozen into Lake Cocytus in Hell, as they make their way towards the bottom of its pit, and Lucifer himself.

Pierino da Vinci (1530–1553) was an Italian Renaissance sculptor, the son of Leonardo da Vinci’s younger brother. He died of malaria, which was still endemic in much of Europe at that time, at the age of only 23, leaving few examples of his work.

Joseph Anton Koch (1768-1839) was an Austrian landscape painter, who worked mainly in Neoclassical style. During his second stay in Rome, he was commissioned to paint frescos in the Villa Massimi on the walls of the Dante Room there, which remain one of the most florid visual accounts of Dante’s Inferno. He completed those between 1824-29. He also appears to have drawn a set of illustrations for Dante’s Inferno in about 1808.

Johann Caspar Lavater (1741-1801) was a Swiss poet and philosopher who was a friend of the painter Henry Fuseli. Between 1775-78, he published an early textbook on physiognomy, in which he related physical appearance, particularly of the face, to specific character traits of individuals. He did this using many illustrations of famous and infamous people. This attracted a popular following, including many artists.

Sir Joshua Reynolds (1723–1792) was the major portrait painter of his day, one of the co-founders of and first president of the Royal Academy of Arts in London. He enjoyed royal patronage, and moved in the highest of artistic circles. However, his work and teaching were lambasted by William Blake, and some of his paintings have suffered serious problems in their paint layer as a result of his experimentation with technique and pigments.

Jan van der Straet, also commonly known by his Italianised name of Giovanni Stradano (1523-1605), was a painter who started his career in Bruges and Antwerp in Belgium, but moved to Florence in 1550, where he worked for the remainder of his life. Mannerist in style, he worked with printmakers in Antwerp to produce collections of prints, including an extensive set for The Divine Comedy.