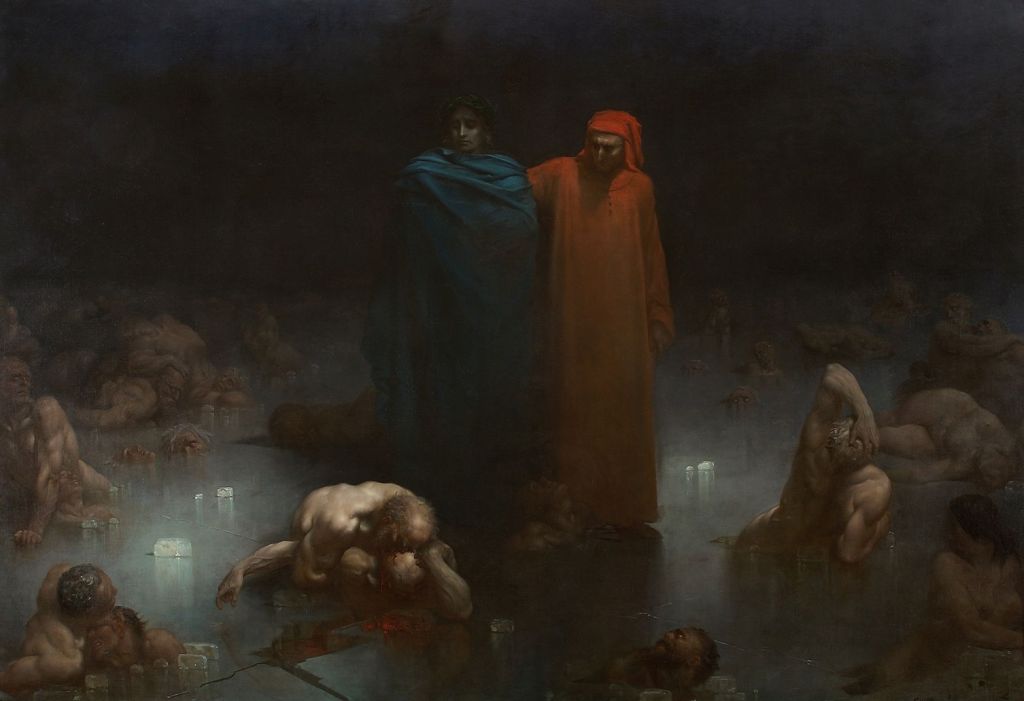 After Dante and Virgil hear the story of an alchemist who claimed to be able to transform base metals into gold, Dante mentions examples of those who have fallen victim to sudden changes of fate, in Thebes and Troy. But none compares to two of the spirits who sink their teeth into the flesh of others in this tenth rottenpocket. One is named as Gianni Schicchi, a Florentine fraudster who once impersonated a dead man to draw up a false will.

The other is Myrrha, who had incestuous desires for her father so passed herself off as another woman in order to sleep with him. Myrrha was transformed into the tree of that name, and her son was Adonis, the much-admired lover of Venus.

They also see Adam a notorious counterfeiter, Sinon the Greek who persuaded the Trojans to bring the wooden horse into their city, and Potiphar’s wife, who repeatedly tried to seduce Joseph before accusing him of trying to seduce her.

Virgil leads Dante on from the eighth circle of Hell towards the next, for the treacherous. As they approach in fog, they hear a deafening horn, and Dante then sees what he thinks are the towers of a distant town; Virgil tells him that they are giants who stand circling the rim, among them the Titans who waged war against the classical gods.

One of them, Antaeus, takes first Virgil then Dante in his hand to carry them onto Cocytus, the frozen lake which forms the ninth circle of Hell.

Next they meet political traitors, including Bocca degli Abati, a Guelph who aided the Ghibellines. They eventually come across Count Ugolino, who is gnawing the back of the head of Archbishop Ruggieri as a dog chews a bone. Their story will open the next article in this series.

William-Adolphe Bouguereau (1825–1905) was a precocious and highly-acclaimed academic painter who dominated the Salon in the late nineteenth century with his figurative works, often drawn from mythology. Classically-trained at the École des Beaux-Arts, he grew infamous for his nudes painted against false settings, and his vehement opposition to Impressionism. However, he taught at the Académie Julian, and worked tirelessly even when his paintings fell from favour.

Henry Fuseli (1741–1825) was a Swiss artist (originally Johann Heinrich Füssli) who first came to Britain in 1765, where he worked for much of his life. A successful portraitist and figurative painter, many of his works show the supernatural usually in melodramatic chiaroscuro and were unusual for the time. A professor of painting at the Royal Academy in London, his pupils included John Constable and William Etty, and he was an influence on William Blake.