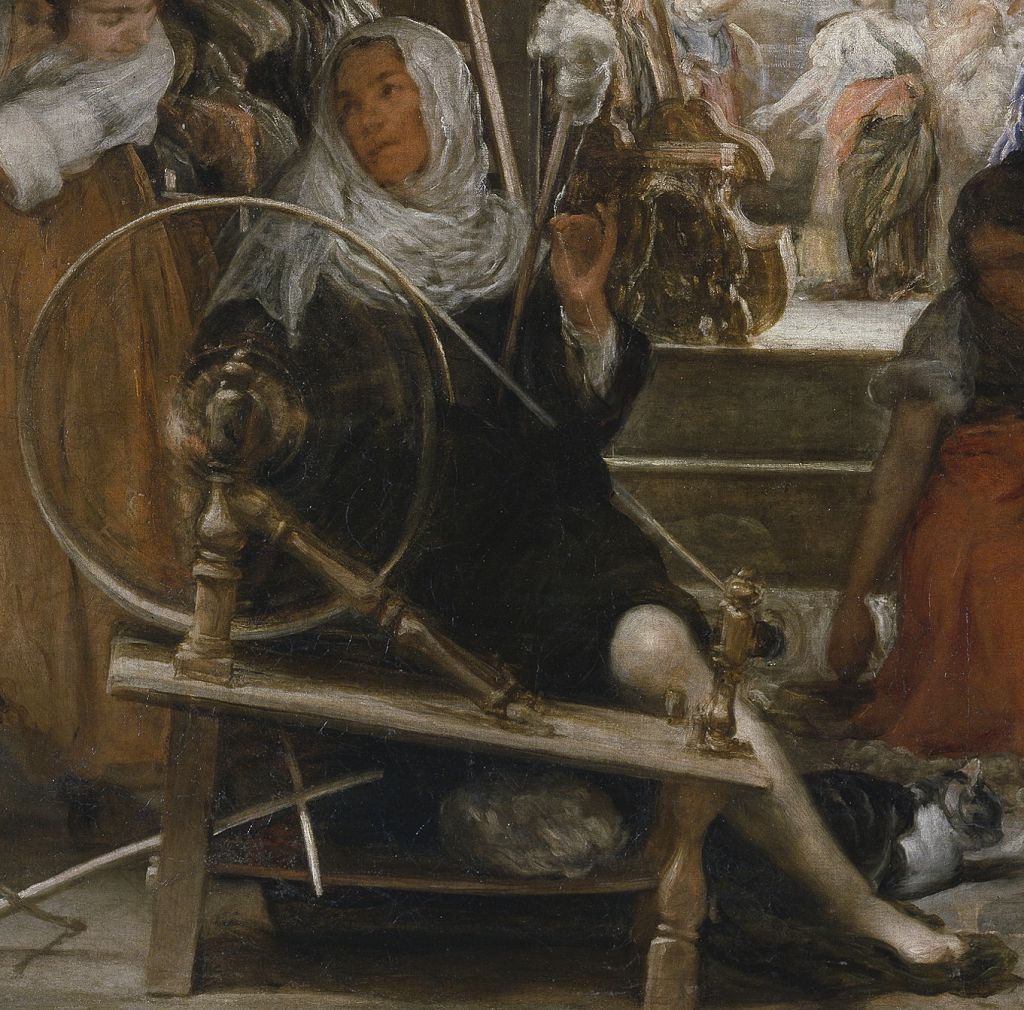 In addition to its role as a staple and everyday activity of women, spinning has acquired some specific meanings which have been depicted in paintings. In this second and final article, I will look at some of these.

In a number of paintings, spinning is shown as an appropriate activity for a young woman to be engaged in when being visited by a suitor or potential husband. Perhaps it was the idea that she would be too busy with her work to be tempted to get near to the man, let alone embrace him. It also conveyed the impression of the woman’s industriousness and devotion to such homely activities.

In Bouguereau’s The Proposal from 1872, even elaborate wrought iron fencing isn’t going to keep the couple apart. The artist shows another common attribute of such courtship scenes: a large cat at the woman’s feet.

In Thomas Eakins’ The Courtship from about 1878, the woman is so busy spinning that she seems almost oblivious of her young man sitting at a distance and watching.

Of course the woman who keeps spinning and never marries then becomes a spinster, the origin of the English word. It started when the term was appended to a woman’s name to indicate her occupation, and by 1719 became synonymous with an old maid.

The Fates and thread of life

In classical Greek and Roman mythology, the lives of humans are determined by the thread spun for them by the Moirai (Greek) or Fatae (Roman). Because of their importance, the Romans also came to refer to them euphemistically as the Parcae (the sparing ones). The three were further identified as:

Il Sodoma’s classical depiction of The Three Fates from about 1525 shows, from the left, Lachesis, Atropos wielding her shears, and Clotho with her distaff and spindle. They appear in many other paintings even into much more recent times.

Walter Crane’s ingenious Bridge of Life from 1884 uses a continuous white thread of life as the thread of time. The baby born and breastfed in the left foreground passes through life, past Clotho who is spinning the thread of life and time at the upper right. That thread passes over the bridge, and Atropos cuts it on their death, in the right foreground.

Spinning as a womanly pursuit: the feminisation of Hercules

A more bizarre classical reference to spinning is in the enforced feminisation of Hercules (Heracles) by Omphale. As a swashbuckling hero, Hercules would be the last man you’d expect to learn how to spin, but when he has to work for Omphale in her court to pay penance for his murder of Iphitus, that is exactly what he does.

In the middle of this marvellous mosaic from about 250 CE, Hercules is seen holding his distaff and spindle, dressed as a woman, while Omphale sits on his Nemean lionskin on her throne, clutching his club.

This is the weird theme of Lucas Cranach the Elder’s painting Hercules and Omphale from 1537. As a paragon of manly attainment – in his twelve labours most notably – Hercules is now dressed as a woman, and performing the womanly task of spinning.

It took Gustave-Claude-Étienne Courtois to cast Hercules as a circus strong-man, a ‘toy-boy’ kneeling in front of an opulent Omphale, in his Hercules at the Feet of Omphale from 1912.

My last painting is probably the most famous depiction of spinning, and certainly its most enigmatic.

Painted originally for Don Pedro de Arce, huntsman to King Philip IV, Velázquez’s Las Hilanderas or The Spinners became part of the Royal Collection, where it is believed to have been damaged by fire in 1734. When it was repaired, new sections were added to the left, right, and upper edges. Until 1928, it was believed to depict the tapestry workshop of Santa Isabel, with spinners working in the foreground, and tapestries hanging in the background.

Since then, it has been claimed to show the weaving contest between Arachne and Athena, although careful examination of the painting reveals that no weaving takes place within the image. However, the women in the foreground show the traditional crafts involved in the production of wool yarn, as seen in the detail below.

The five women shown in the foreground, going from left to right, are:

There is also a cat, at the second woman’s feet, and fleeces hanging at the top right.

Later this year, when I examine the paintings of Velázquez, I will consider the reading of this magnificent work in detail.