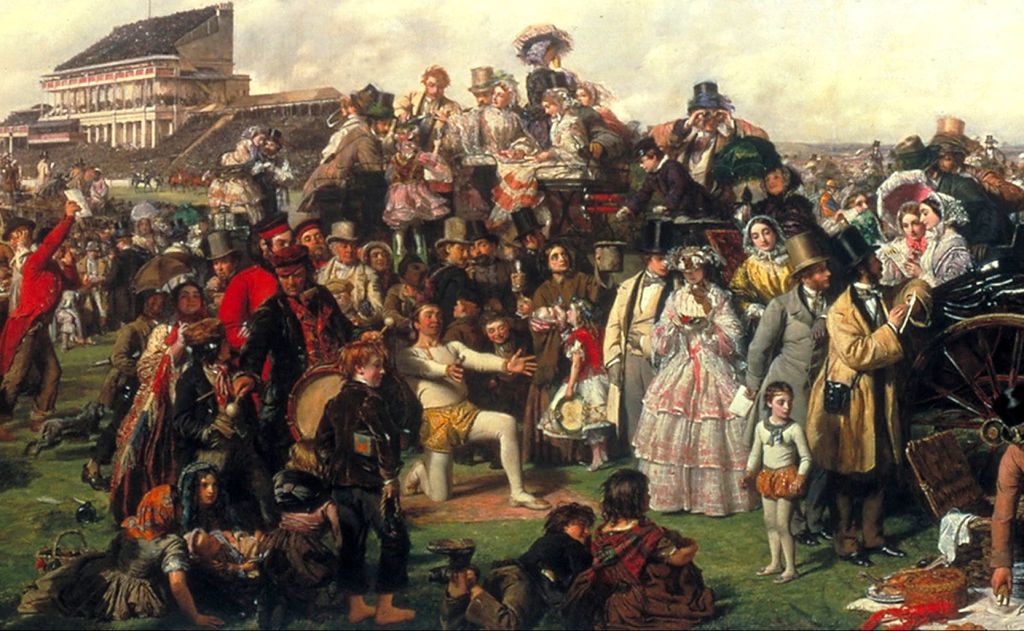 Many British artists of the nineteenth century painted motifs quite independent of their age, but William Powell Frith (1819–1909) was quintessentially Victorian. His paintings captured the spirit and substance of the period in a way that no other British artist did.

He was born in a village in North Yorkshire, his father keeping a hotel in the nearby town of Harrogate. He moved to London to start his studies when he was sixteen, and progressed to the Royal Academy Schools. He was soon painting portraits, and exhibiting at the British Institution. In the late 1830s, he was a member of a group of artists who called themselves The Clique; others included Richard Dadd and Augustus Egg. The group dissolved in 1843 when Dadd was admitted to ‘Bedlam’ Psychiatric Hospital after he had murdered his father.

The Clique placed high value on what had been termed rather disparagingly genre scenes, and took their lead from the work of William Hogarth and David Wilkie.

Frith’s early paintings started to incorporate groups of figures, often in scenes with literary links, such as his rustic An English Merrymaking a Hundred Years Ago (1847). Here Frith offered a quotation from John Milton’s l’Allegro in explanation:
When the merry bells ring round,
And jocund rebecks sound
To many a youth and many a maid
Dancing in the checquered shade,
And young and old come forth to play
On a sunshine holiday.

As he finished that painting, Frith started work on what was to prove his breakthrough, the first of his great social panoramas, Ramsgate Sands, which he completed in 1854 and exhibited that summer at the Royal Academy, to which he had just been admitted.

Prior to 1846, Ramsgate had been an unassuming and quiet seaside town on the coast at the eastern tip of Kent. Then the railway came, and brought the masses from London to bathe in Ramsgate’s waters. Frith holidayed there in 1851, when he made his first sketches on which he based this work.

On the beach is an eclectic mixture of different classes, reflected in their clothing and activities. Many of these are stereotypes who became stock characters in his paintings, and Frith included himself as the man behind the group at the far right.

Critical reception was mixed, with some dismissing the painting as vulgar, but it was enormously popular with the public, and was bought for a thousand guineas by a publisher to turn into prints. Queen Victoria then bought the painting, ironically to hang in Osborne House, her holiday palace on the Isle of Wight.

Encouraged by this success, Frith turned his attention to another famous gathering of people from all walks of life, the Derby horse races at Epsom, south of London.

This late study for Derby Day was probably painted in about 1856, and is very close to the finished work shown below.

The Derby Day (1856-58) had been commissioned by Jacob Bell for the huge fee of £1,500, and Frith was paid a further £1,500 for the rights to make prints. It was exhibited at the Royal Academy in 1858, and was so popular that a guard rail had to be installed in front of it to protect the work from the admiring crowds.

Within its mass of people, there are innumerable scenes and visual anecdotes, much as appear in some of Poussin’s idealised landscapes, but Frith here concentrates them into a human landscape which epitomises the moment and the whole era.

Frith’s The Crossing Sweeper, here an 1893 copy of the 1858 original, refers to various characters in Charles Dickens’ novels about London. Crossing sweepers were among the poorest of the poor in London and other cities at that time. They had a ‘patch’ over which they had exclusive rights to sweep the path in front of affluent pedestrians, to save them picking their way through piles of horse manure and mud.

Frith’s success and recognition brought him into London’s artistic circles, where he became a friend of the great author, seen in his portrait of Charles Dickens in his Study (1859).