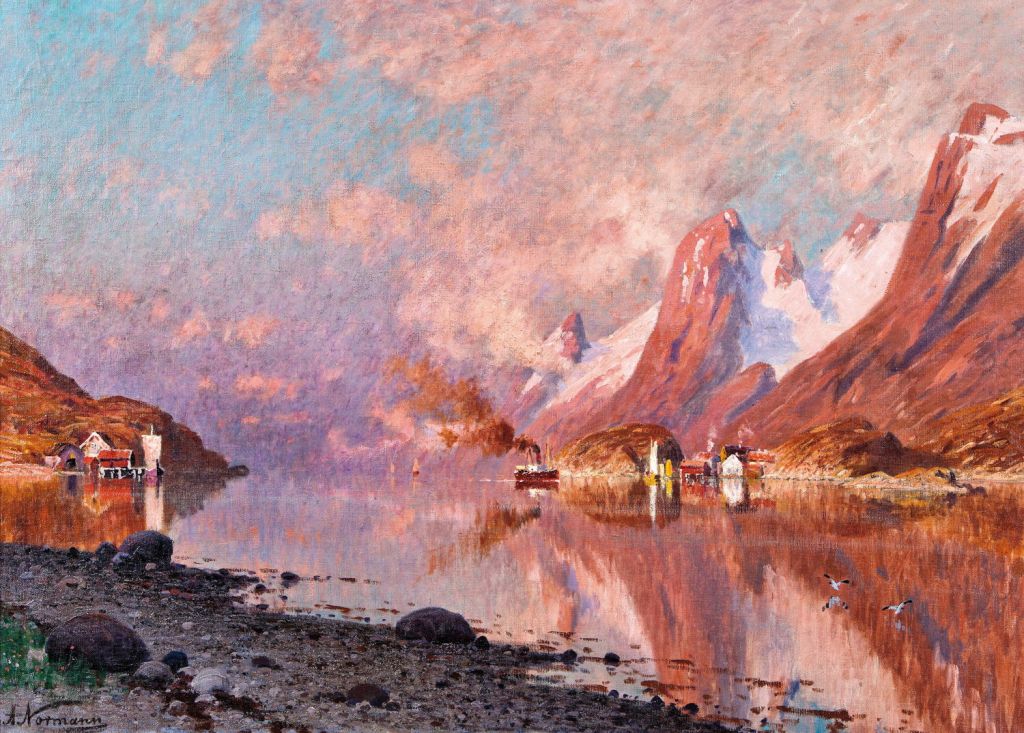 In 1892, the Norwegian landscape painter Eilert Adelsteen Normann (1848-1918) had invited the young Edvard Munch to exhibit in Berlin, and launched Munch on his way to the success which he deserved. The following year, Munch moved on, and his friend Normann returned to painting Norwegian fjords for customers in Berlin.

This article concludes my tribute to Normann with the undated examples of his work that I have found.

Normann was sufficiently successful to have a large ornamented wooden cabin built for him close to Balestrand in Norway, where he spent each summer. This picturesque area by Sognefjord had attracted quite a colony of artists, including Hans Gude and Hans Dahl. During the rest of the year he taught, mainly in Germany, and some of his students were sufficiently inspired by their teacher’s work to spend their summers painting in Norway too.

Munken gård in Esefjord was painted on the shore of this tributary to the mighty Sognefjord, in the south-west of Norway, near Normann’s summer cabin.

One of the regular passenger and cargo ferry services steams up an unidentified fjord in Normann’s The Steamship.

Sognefjord, Norway shows the country’s longest and deepest fjord, which carves its way due east from the southern bulge of the coastline. This view features Normann’s favourite small craft, and the sky and rock have become very painterly.

Norwegian Fjord may well be another view of Sognefjord, with similar boats on its slightly rippled mirror surface.

From Hardanger most probably shows Hardangerfjord, which drains the glaciated Hardangervidda plateau in central south-west Norway, emptying into the sea to the south of Bergen. The steamship appears to be one of the early cruise ships, which started to take tourists – some no doubt inspired by Normann’s paintings – around the coast of Norway during the late nineteenth century. Its flotilla of little steamboats is busy ferrying the visitors to the shore.

Sailing on the Fjord shows leisurely boating on an unidentified fjord.

Perhaps it was a result of the influence of Edvard Munch that some of Normann’s paintings are rich in chroma, and more painterly too.

Coastal Landscape appears to be a quick oil sketch, with the sun warming its colours, as a steamship makes its way along the middle of the fjord.

Sunset over the Fjord is also quite sketchy, but Normann has found time to paint in some seabirds flying along the small waves as they break in the foreground.

For this view of Northern Norway, Midnight Sun I suspect that Normann travelled north to the Lofoten Islands, where he had painted earlier in his career. A small group of seabirds, probably gannets, are in flight just above the glassy surface of the fjord, at the lower right.

In the winter of 1918-19, the pandemic influenza which had been sweeping through Europe and much of the rest of the world reached Norway. Normann was then aged 70, and died from it in Oslo on 26 December 1918, exactly a century ago.

He is remembered for these wonderful paintings of Norway, but most of all for recognising the art of Edvard Munch, and giving him the break that he so badly needed.