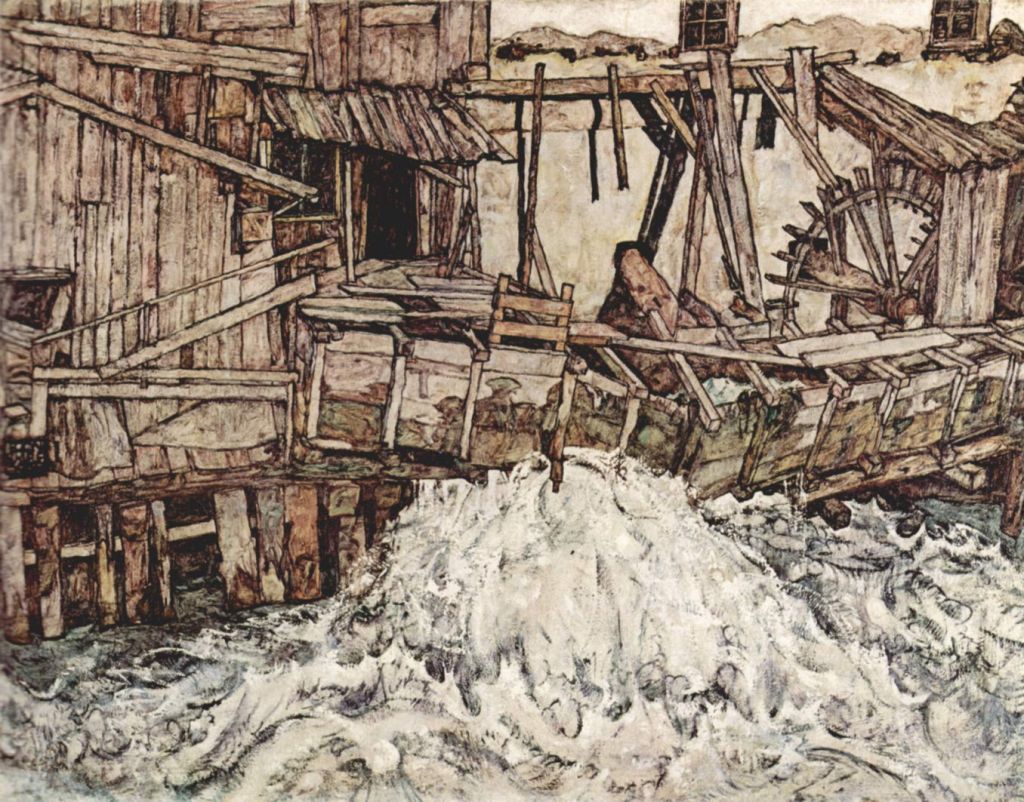 Egon Schiele’s landscape paintings from the early years of the First World War were innovative and exciting; his figurative work, which was even more radical, I find more of a challenge. Many of those works from 1915 centre on his personal relationships.

It appears that, when he married Edith Harms, Schiele had expected to maintain his relationship with Wally (Walburga Neuzil), with whom he had lived for four years. When he tried to explain this to Wally, she – perhaps not unsurprisingly – abandoned him immediately, and they apparently never met again.

Schiele expressed this in his major painting of Death and the Maiden (1915), which was exhibited the following year in Berlin. The young woman is based on his earlier paintings of Wally, and the man is a self-portrait. They embrace in unnatural kneeling positions on crumpled sheets which are laid out on rocks in the countryside.

Both of the man’s hands show the index finger separated in the same distinctive position as in earlier self-portraits, perhaps confirming that this is the artist himself.

If his former relationship with Wally is marked by emotionally-charged and complex images, Schiele’s new wife Edith appears more conventional and emotionless.

In Edith Schiele in a Striped Dress, Sitting (1915), she sits static, looking up at the viewer, her face neutral in its expression.

In Schiele’s full-length Portrait of Edith (the artist’s wife) (1915), she is seen in a different striped dress, facing the viewer, and devoid of emotion or movement.

Only when the artist shows her interacting with a child, in this watercolour of Schiele’s Wife with Her Little Nephew (1915), does she come to life. Unlike in his earlier Mother and Child, Edith looks at her nephew, and they embrace lovingly.

Schiele continued to push the boundaries of acceptability, in Lovemaking (1915). This compares with Moser’s earlier Lovers, in which the couple are nude; this couple may still be clothed, but are apparently in the midst of intercourse, implying that their lovemaking is more spur-of-the-moment, possibly even illicit. Despite that, they stare into the distance with mournful expressions. The woman’s right hand also has unusual separation between her little and ring fingers, the complement of that seen in his self-portraits.

Another taboo which Schiele breaks is in his explicit depiction of Female Lovers (1915), whose limbs seem entangled and contorted as if pushing the boundaries of their anatomy. He colours their lips and (on the woman who is nude) nipples, giving them a garish look.

At the start of 1916, Schiele exhibited in Berlin, with the Secession there. One of his paintings was hung alongside one of Klimt’s in the foyer.

Schiele continued in his military service, and initially seems to have been given fairly generous periods off-duty working in his studio. In May, he moved to Upper Austria, where he worked in a prisoner-of-war camp for Russian officers in Mühlings. Away from his own studio (although he was given space to use as a studio), he was largely confined to drawing, and was only able to paint two works. Edith stayed with him.

One of those two completed paintings is this wonderful image of dilapidation and decay, Old Mill (1916). He painted this in Upper Austria, on the bank of the Grosse Erlauf river just one kilometer (just over half a mile) from the camp where he was stationed at the time.

One-Year Volunteer Lance-Corporal (1916) is one of his drawings made in the camp at Mühlings, showing a fresh-faced soldier, his uniform casually unbuttoned.

At the start of 1917, Schiele returned to Vienna, where he spent the last two years of his life.