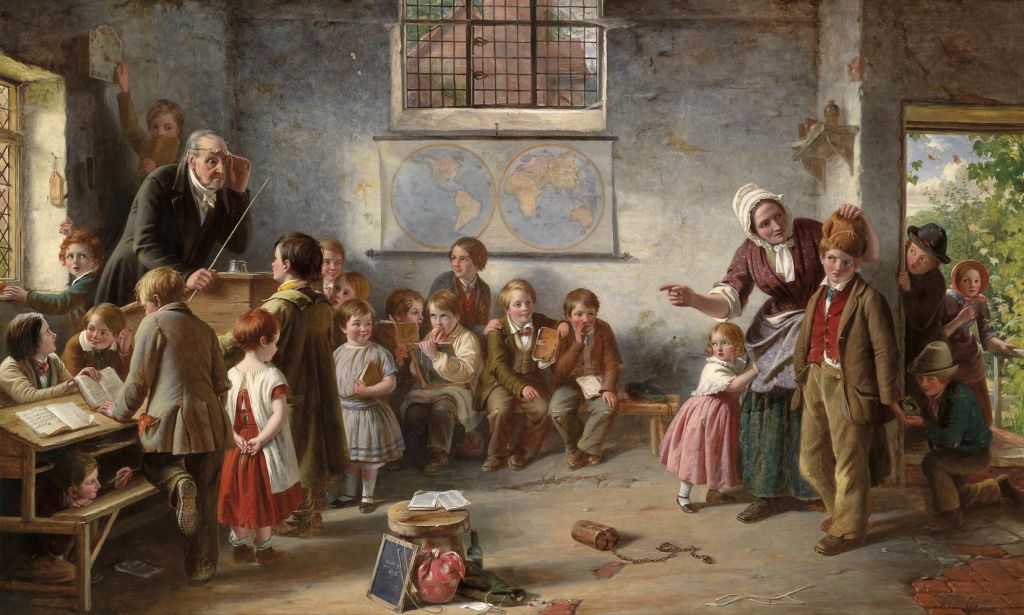 The Masters have seemingly painted almost every conceivable subject and theme, but I have been unable to discover any well-known paintings showing a classroom in school. This is odd: although we now spend longer in education than did any previous generation, and most famous painters had started apprenticeships before they wore long trousers, maybe most found their schooldays weren’t exactly the happiest days of their life.

In this and the next article, I therefore rely on artists whose names are less familiar, to see the changes that have taken place in the classrooms of schools over the three hundred years up to the early twentieth century – and stumble across some interesting art history in the process.

Isaac van Ostade lived only briefly between 1621–1649, so I suspect this painting of a Village School from his circle was probably made by about 1650, possibly rather earlier. Although it has seen better days, it shows a schoolmaster at the right supervising a group with a wide age range, all in various levels of poverty, and in primitive stages of education. The classroom itself is almost bare of furniture, with most of the children sitting or squatting on the floor.

Later in the seventeenth century, Jan Steen’s The Village School (c 1665) shows one reason for the apparent unpopularity of school as a motif: physical punishment. The child at the right holds out a hand for teacher to strike it with a wooden spoon, presumably in return for the screwed-up piece of paper on the floor. The children here are better-dressed, and the room better-furnished.

One boy at the far right is writing intently, and another, his face almost covered by the brim of his hat, is reading a book.

A few years later, Steen painted a scene in a larger and more chaotic classroom, in The Village School from about 1670. Although there are two staff sat at the teachers’ desk, the man is distracted, perhaps cutting himself a fresh quill. The woman teacher sat next to him is engaged in explaining something to a pupil, though.

Around them, all hell is breaking loose. In the distance, a boy is stood on one of the trestle tables. Older children are teaching younger ones, and a small group at a table at the right are trying to write while others get up to mischief. One younger child in the middle of the foreground has fallen asleep against a hat.

In those early schools, boys and girls were not segregated, but enjoyed equally derelict schooling. By the middle of the eighteenth century, in larger schools at least, it became more common for the genders to be taught in separate classes or even different schools.

Boys’ School is a copy of an original painting by Jan Josef Horemans the Younger from the middle of the eighteenth century. Its schoolmaster looks to be the only figure sat at a desk, and is engaged with a couple of the older boys, while the rest of the class catches up with its social life. A few writing tablets are visible, as are scraps of paper, but the only real books seem to be those well out of reach, above the schoolmaster’s head.

Its sister painting showing a Girls’ School is more peaceful and purposeful, but aimed to trap young women in their narrow social role. Although one girl is reading, others are engaged in fibrecraft or dressmaking, or apparently learning how to make a brush from a bundle of twigs. More academic learning was only really possible in richer homes, under exceptional private tutors.

In towns and cities, there was greater economic drive for children to work throughout the year, and to obtain a better education. These seem to have taken some schools, at least, to operate well into the evening, as George Gillis Haanen shows in his beautifully lit Night School from 1835. The schoolmaster, ensconced at his elevated desk, does at least look more academic, and there are slates for writing and children reading books.

The nineteenth century also brought the concept of self-improvement, and a growing desire among many of the working and middle classes to better themselves by education, to improve their income and family prospects – increasingly among a growing minority of girls too.

Changes were slower in the country still, as seen in this undated painting by one of Eduard Ritter’s circle, of Brave Girls, Bad Boys, School Class in Tyrol, probably from between 1835-1849, the reign of Emperor Ferdinand I of Austria shown in one of its portraits. The children are enjoying a rich range of fruit, and there’s no shortage of paper, even if some of it is being used to make hats rather than for writing. Its elderly schoolmaster looks delightfully benign, and the stem on his smoking pipe is the longest that I have ever seen.

Schools in Europe had arisen to meet the need for clergy and to support the church; those in other cultures were no different, as shown in John Frederick Lewis’s undated watercolour of an Arab School, probably from around 1850. This is what is more properly known as a maktab, which provides general schooling between the ages of 6-14, after which children specialise more in their subjects prior to going on to higher education at a madrasah.

Thomas Faed’s paintings have faded from view since it was claimed that he did for Scottish painting what Robert Burns did for Scottish song. His Visit to the Village School from 1852 shows an elderly couple listening to some very young children reading, as the schoolmaster is trying to impress his visitors. Older children, though, are not being quite so obliging, and stood against the wall at the far left is a pupil wearing a dunce’s hat in shame.

Scotland, for all the difficulties posed by its far-flung rural and island populations, was in the vanguard of introducing free public schooling: in 1561 the Church of Scotland declared that every parish church should have its own teacher, and that education should be provided free to the poor, and an act of the Scottish Parliament raised taxes for that purpose in 1633.

Thomas Brooks didn’t have the benefit of a Scottish education, and his painting of The New Pupil from 1854 clearly shows the more disorderly rabble in an English country school, as a mother introduces her unwilling son to his new class. Brooks’ eye for fine detail and the modern lightness in this work are leading up to what would later be termed Naturalism.

Charles Hunt’s Visit to the Schoolroom from 1859 returns to more traditional style, as a well-dressed mother looks a little taken aback by the antics going on behind the teacher, and extra-curricular activities include a girl who is about to snip a lock from a boy’s head. At the far left another dunce stands on a chair wearing the trademark conical hat.