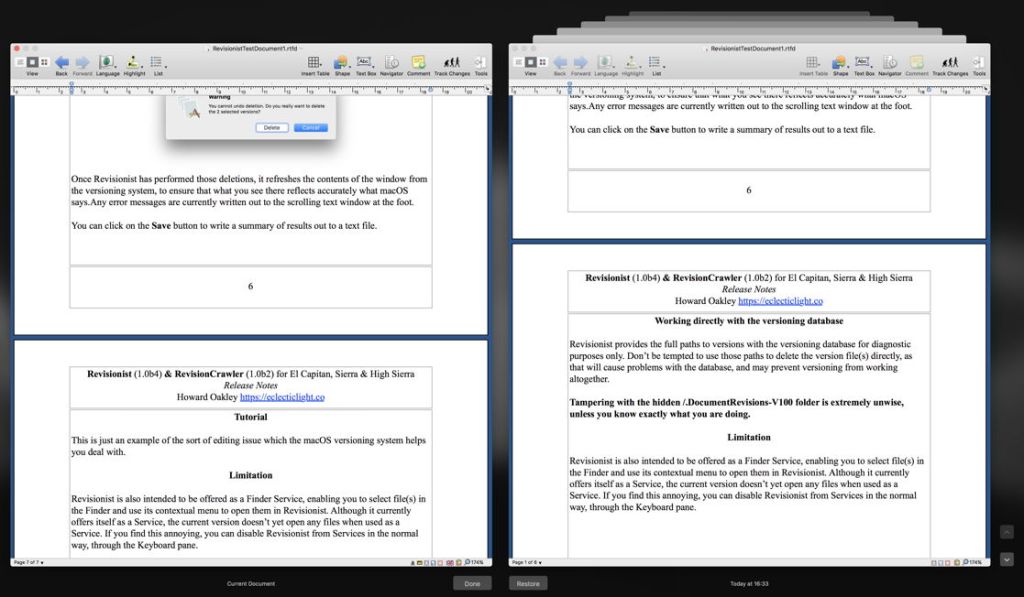 You can’t turn the macOS versioning system off, but few users make much use of it. This workthrough shows an example of what you can do with it, in a situation where many of us reach straight for our Time Machine backups, and waste a lot of time as a result.

The scenario is not uncommon: you’re working on a document, in this case stored in RTFD format, and suddenly realise that an important section of it has gone missing. You need to find the latest version of that section, and insert it into the current version of the document.

Using the editing app and the Versions Browser

Open the Versions Browser by going to the File menu, its Revert to command, selecting the option Browse all versions.

In the right hand document view, navigate back through the versions until you find the most recent containing the missing section.

In that version, select the content which is missing from the most recent version, and Copy it.

Switch to the left hand document, showing the current version, and locate the correct insertion point for that missing content. Paste it into place, and use the normal tools in the editing app to adjust its styling and format.

If you want to remove versions, move forward or back to display the version which you want to remove at the right. Then enter the (hidden) File menu’s Revert to command, selecting Delete this Version. If that command is disabled, it means that the version being displayed is a Time Machine backup, and cannot be removed. You can only remove one version at a time.

Another useful clue as to which versions displayed on the right can be removed, as they are managed by the versioning system and not in Time Machine backups, is that local versions have long names formed from UUIDs. Backups are shown with the regular file name and extension.

Once you have finished working in the Versions Browser, click on the Done button to return to normal editing mode.

The biggest problem with using the Versions Browser to remove old versions is that they have to be removed one at a time, which quickly becomes tedious. You also aren’t informed as so how large each version is; as saving space on storage is a major reason for removing old versions, this is a significant shortcoming.

Double-click on any of the versions listed in Revisionist to preview it using Quick Look. When you have located the most recent version containing the missing section, click the button at the top of the preview to open it using the default editor for that type of document, in this case TextEdit. Then open the latest version likewise. Note that all versions other than the latest are opened in a locked state.

Select the missing content in the previous version, and Copy it.

Switch to the window containing the current version, locate the correct insertion point, and Paste it into place. Use the available tools to adjust the document’s styling and format.

To remove old versions, simply select all those which you want to remove, using the Shift and Command modifier keys as appropriate, and click on the Delete button. Revisionist doesn’t show any Time Machine backups: all the versions listed except the current one can be removed. The app protects the current version, so if you select all versions and then click Delete, the current version will be preserved automatically.

Unlike the macOS Versions Browser, Revisionist can remove any versions (apart from the current one) at once, and only shows those versions in the macOS versioning system, not those in Time Machine backups. It also, most importantly, displays the file size of each version, so that you can estimate the space saving achieved by removing one or more old versions.

The Versions Browser has a neat interface, and its integration of documents saved in Time Machine backups may seem useful. In practice, you are likely to find some quite old versions saved in the versioning system, and mixing in backup copies can get confusing.

Here is a practical example of this, in the Tinderbox 7 document in which I keep all my old questions and answers for my Genius Tips section in MacFormat magazine. Viewed in the Versions Browser, I was surprised at how long the record of versions was, stretching right back to September of last year. Several of those appeared to be Time Machine backups, so working through them here and removing old versions was going to be tedious, and didn’t look to be worth the effort. 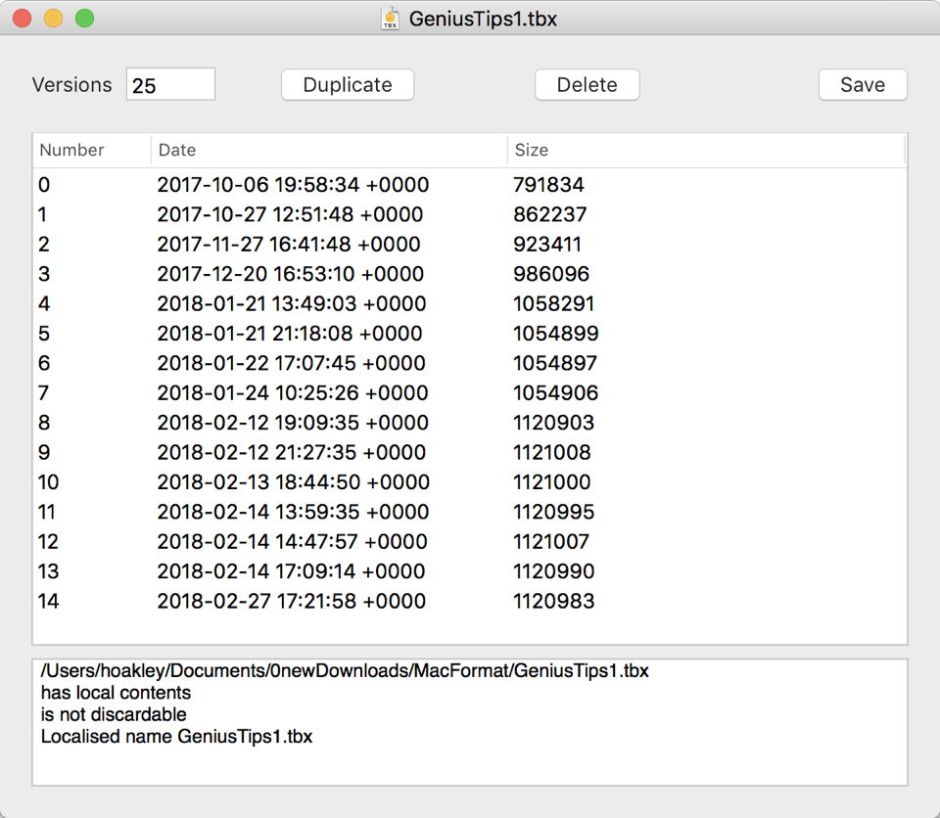 Viewed in Revisionist, the picture was completely different. I had a total of 13 old versions which I could remove (macOS had records of 25 in all, including the current document), most of which were larger than 1 MB in size. The oldest version still stored in the versioning database was from four months ago, and there were six old versions stored from the last time that I worked in that document earlier this month.

There was little point, given all the backups that Time Machine had made over this period, in keeping any version other than the latest. I selected them all, clicked on Delete, and recovered around 14 MB of disk space.